In a Daring Fireball report over the weekend titled "Will the New iPhones Support Apple Pencil?," John Gruber dug up an interview with NDTV's Vikam Chandra back in May where Apple's CEO let it slip that the Apple Pencils could do amazing things on … an iPhone.

Tim Cook: "Well we launched a pencil, not a stylus, first of all, and there's a big difference, and the things that people are doing with this pencil, I think that Steve would have loved. He loved to help people create. And if you've ever seen what can be created with that pencil on an iPad or an iPhone, it's really unbelievable. You should really show some of these to your audience."

On August 13 Patently Apple reported on an update to the iPhone's Trademark and pointed out that Apple quitely added "electronic notes" to International Class 037's description for the updated trademark. By itself, it didn't prove that the iPhone would use the Apple Pencil, but the timing of update to add "electronic notes" was certainly a strong hint Apple was at least preparing for such an eventuality.

I say eventuality because we reported on an Apple Pencil granted patent back in November 2015 titled "Apple wins an 'Apple Pencil' Related Patent for use with an iPad and Future iPhone," that clearly illustrated that such a feature would be coming to a future iPhone as noted in the patent figure from that patent filing. 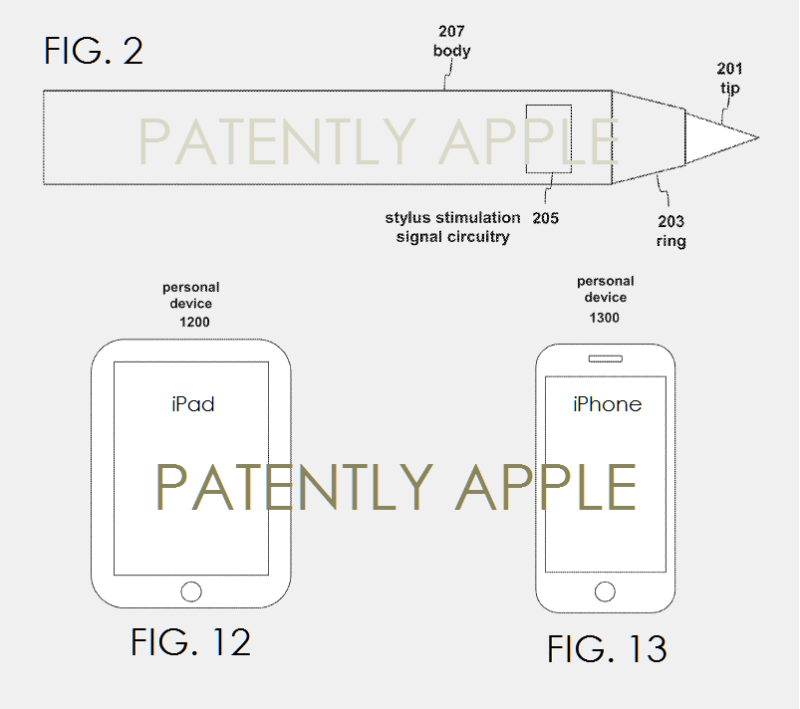 That doesn't guarantee that the Apple Pencil will be coming to the iPhone 7 but it does mean that it's on Apple's road map based on Tim Cook's May statement. Will it be ready for the iPhone 7 or will Apple hold back this feature for their anniversary 2017 model.

The mere thought of a future iPhone supporting the Apple Pencil likely has Samsung's mobile chief on his knees praying that it won't be debuting today in light of their recent Note 7 recall. When Apple launched their first phablet with the iPhone 6 Plus, Samsung suffered big time with lost sales to Apple. If, and it's a big if, the iPhone 7 supports Apple Pencil, it'll send shock waves throughout the tech world as the surprise of the year and send Samsung into a panic that they'll lose even more customers to Apple's iPhone. Oh please, let it be so (ha!).