The Joke of the Week: Apple is going to Copy Samsung's Edge Smartphone Design

There were countless reports posted this week with propaganda about Apple's 2017 iPhone copying Samsung's Galaxy Edge design with curved edges. The Cult of Mac's byline this week was "2017 iPhone could rip off Samsung's curved glass." Oh ye of little faith. Another report by InvestorPlace had a byline "Apple Inc. (AAPL) Will Copy Samsung's Curves in New iPhone." That report noted that "Apple and Samsung have a history when it comes to copying smartphone designs. Usually, Samsung has been on the hot seat for stealing iPhone features. In fact, the company has been successfully sued by AAPL." The report further noted that the iPhone 8 and iPhone 8 Plus "would be the first iPhone to feature an AMOLED display. And that display would be curved to wrap around both sides of the new iPhone. That sounds very much like the basic design of Samsung's Galaxy Note 7, a premium phablet that frequently has been called the best smartphone of 2016.

According to Wikipedia, Samsung's Galaxy Note 4 Edge was the first Samsung smartphone to have one side with a curved edge. That debuted on September 3, 2014. That fulfilled a Samsung patent that we covered back in November 2013. Samsung's original U.S. patent filing 20130300697 indicated that the idea was first presented in a Korean patent filing back on May 14, 2012. 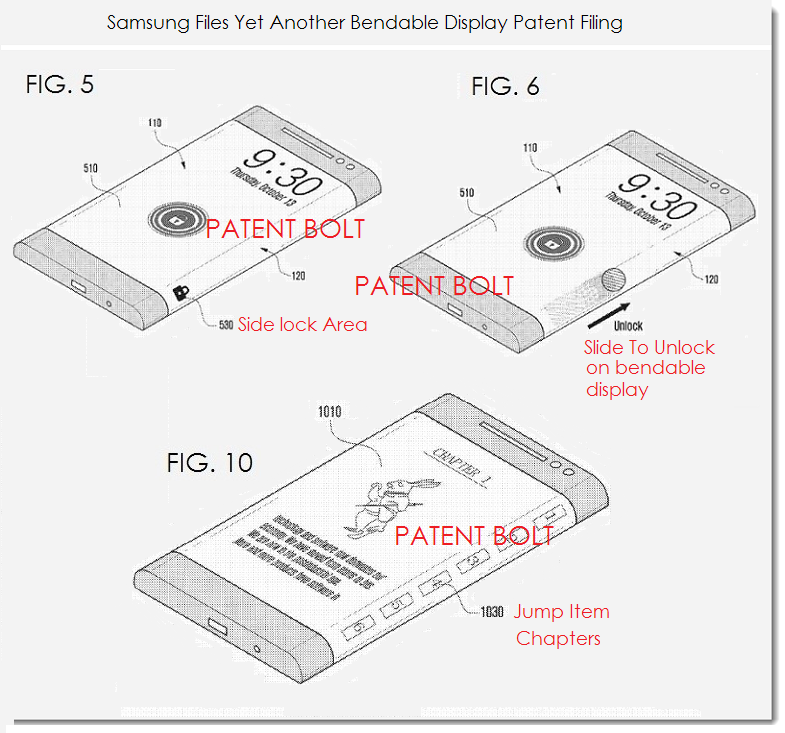 Now let's look at a previous Apple patent dating back to September 27, 2011. By the way that's a "granted patent" not just a patent application like Samsung's was. So not only did the curved edge smartphone idea initiate with Apple on an earlier day, but that it was granted to Apple months before Samsung even filed their patent application hoping to get one granted for such a concept. 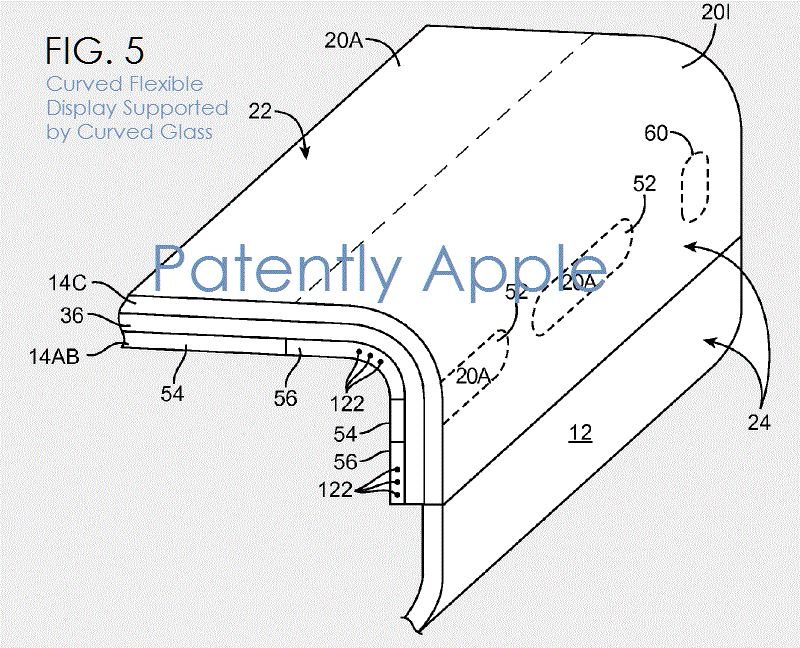 Apple notes in their granted patent that FIG. 5 is a perspective view of a portion of an illustrative electronic device showing touch-sensitive edge displays on an edge of the device formed from a portion of a bent flexible display in accordance with an embodiment of the present invention.

In 2011, another smartphone form factor patent application was filed and surfaced in 2013, displaying an OLED display with bend edges with virtual button on the bend edge of smartphone (#406) as noted below. Once again, this was well ahead of Samsung's patent filing.

In 2013 Apple illustrated another glass based form factor with bent edges as noted below which looks nothing like Samsung's edge. So the propaganda that surfaced this week from the mainstream and Android press was truly smoke and mirrors sprinkled with wishful thinking. Apple clearly owned a granted patent well ahead of Samsung clearly showing an OLED display with curved edges and virtual buttons.

Sorry folks, but any website who thinks that Apple is about to copy a Samsung design is out to lunch. The so-called "facts" are based on a rumor and fantasies fished from other reports that started the lie and it has avalanched from there. In reality, Samsung had once again copied an Apple concept laid out long ago in a public patent filing. Samsung is known to be a fast copier, but their trick is that they take concepts from competing patents and run with it. They don't even wait for the product to come to market to copy – because this way it looks like it's their original idea instead of one being copied. But patent filings show us another side of the story. And in this case, the joke of the week was that Apple is going to copy the Samsung Galaxy Edge instead of simply fulfilling a patent that they had on record long before the Galaxy Edge ever existed.