The original iPad Pro launched in 2015 and with it the introduced Apple Pencil which is a deadly accurate stylus that Apple describes as a precision input device which makes drawing and sketching feel remarkably fluid and natural. The touch subsystem of the Multi-Touch display in iPad Pro had been redesigned to work with Apple Pencil to dramatically reduce latency and deliver incredible accuracy for activities like fine art illustration and detailed 3D design. Advanced sensors in Apple Pencil measure both pressure and tilt for a fast and fluid drawing experience." It was much better than Microsoft's Surface pen and now Microsoft wants to up their game.

Earlier this month the U.S. Patent & Trademark Office published a Microsoft patent application that revealed their work on a future Surface tablet that will work with an all-new digital pen-brush that will provide users/artists with the ability to deform the pen-brush head to deliver varying stroke thickness and special effects. The newly designed deformable pen-brush will work with a future Surface tablet that will support a new infrared sensing system to deliver higher pen accuracy. Microsoft's deformable pen-brush is likely to work with a future version of their Fresh Paint app.

Without a doubt the war to attract artists to either the iPad Pro or Surface tablet is heating up and both Windows and iOS will be pushing the envelope with new pen (and Pencil) and tablet features to win them over. A little creative competition between platforms is certainly good news for artists.

This fall both Apple and Microsoft will be updating their respective tablets and so it'll be interesting to see what these tech titans will be bringing to the table this time around.

Apple's iPad Pro catapulted to being the number one pro tablet in short order leaving the Surface tablets in the dust. In Q2 2016 IDC reported that Apple was number one, Samsung number two while Microsoft was nowhere to be found.

For more on this detailed Patently Mobile report, click here. 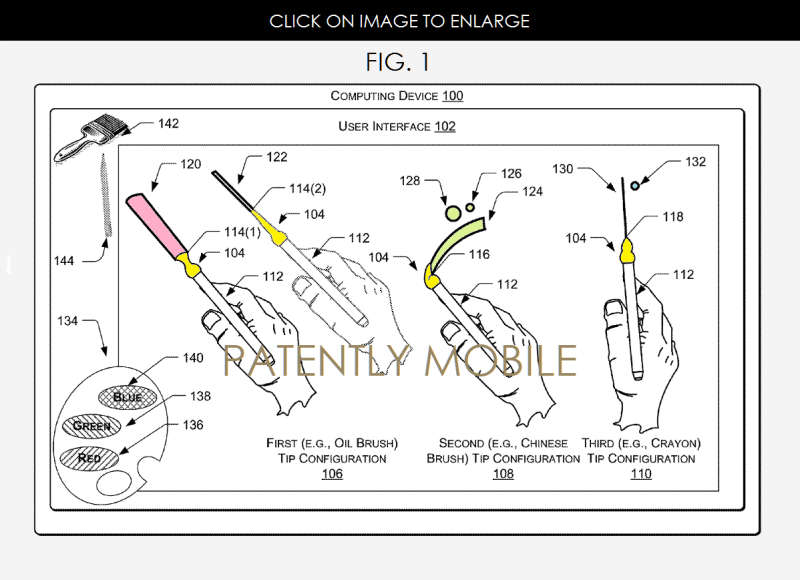 Microsoft's patent FIG. 1 noted above illustrates a computing device 100 (such as a future Surface Tablet) that may be configured to present an exemplary user interface #102 associated with an electronic painting application (like Microsoft's Fresh Paint) that will be able to take advantage of an all-new digital pen-brush for artists.