Earlier today, DigiTimes reported that weak tablet demand is prompting vendors to leave this segment to refocus on new emerging markets such as virtual and augmented reality devices or even gaming PCs. The report specifically noted that Asustek Computer and Acer have turned to focus more on niche applications, while Micro-Start International (MSI) has already phased out of the business and to focus mainly on gaming PC product lines. China-based white-box players that have joined Intel's China Technology Ecosystem (CTE), have also mostly stopped pushing tablet products.

The report interestingly noted that "Dropping demand is expected to cause Asustek's tablet shipments to fall below three million units in 2016, according to sources from the upstream supply chain, leaving Apple the only player that is still able to achieve strong profits from the tablet sector.

The report further noted that "The sources also pointed out that despite weakening tablet shipments, Wintel-based 2-in-1 devices continue to enjoy growth. However, growth rates are still not strong enough to offset the decline of tablets.

Lastly, the report noted that "To survive in the market, many tablet players have turned to develop products for niche markets such as industrial, enterprise, military and education, and hope to expand their presence in these areas."

In that light, it was interesting to see an IDC report published later in the day forecasting a rebound in the tablet sector between 2018 and 2020 while acknowledging that the current tablet market is gloomily destined to end the year down by 11.5%, an all-time low.

IDC sees a shift towards detachable tablets. "The price pressure combined with a healthier demand on larger screen sizes and detachable tablets will eventually result in an increased portfolio offering from tablet and PC manufacturers," said Jean Philippe Bouchard, research director at IDC.

Although detachable tablets capture the spotlight, slate tablets will continue to account for the majority of shipments throughout the forecast. In 2016, 85% of all tablets shipped will be slates and this will decrease to 68% by 2020. The majority of Apple's iPad line-up would be considered 'slates' whereas Microsoft's Surface product is notably considered detachables.

Today, with Microsoft's Surface being on the market for years now, hasn't been able to made a dent in the market against Apple's iPad in proportion to its own created hype. Even by 2020 68% of tablets sold will be 'slates' where Apple is the clear leader to date and Microsoft is nowhere to be found. And despite the facts that Apple will end 2016 more then double the market share of Windows tablets, IDC magically see's Windows making the biggest gains in tablet growth from 2017 to 2020 as noted in the chart below. This, in spite of Windows tablet OEM's in Taiwan dumping the unprofitable tablet market going forward. 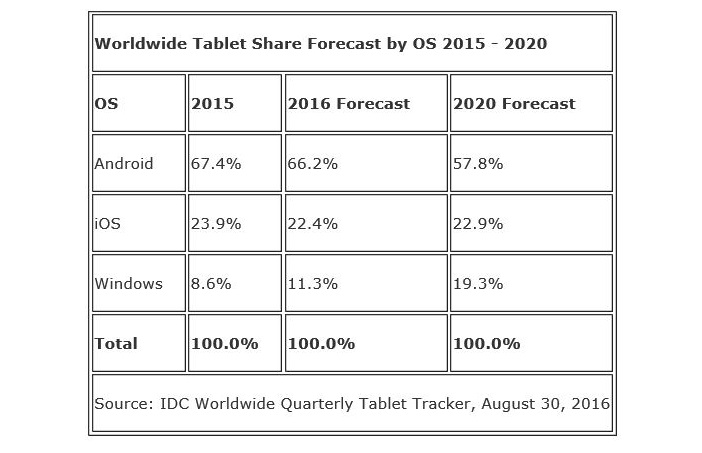 If there's some magical formula IDC has to explain why only Windows will show a spike in tablet market share by 2020, with iOS and Android stagnating and/or declining, they didn't wish to reveal it in their report. Perhaps it all came down to the analyst's crystal ball being made in Redmond Washington.