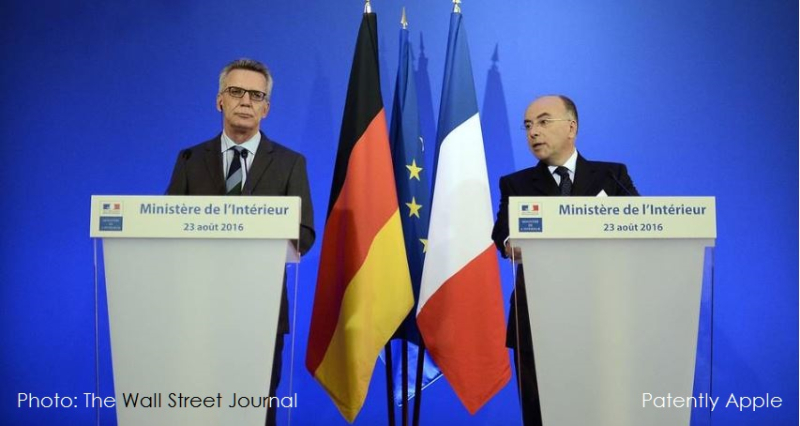 Interior Ministers of France and Germany took to the podium yesterday to lobby for a law change that would enable courts to demand that Internet companies decrypt data to help further criminal investigations – especially decrypting terrorist cells' private communications under court order. Once again Apple is being drawn into this conversation.

The Wall Street Journal report noted that "French and German intelligence services are struggling to intercept messages of Islamic State militants and other terrorists, who increasingly use chat apps like Facebook's WhatsApp, Apple Inc.'s iMessage or privacy-centric app Telegram to plan their attacks. These apps use encryption that can make it almost impossible for investigators to access a suspect's communications, even with a court order.

French Interior Minister Bernard Cazeneuve, speaking at a joint press conference with his German counterpart in Paris, stated that "Messages exchanged through certain apps such as Telegram must be decrypted and used as evidence by magistrates and investigators as part of legal proceedings." Cazeneuve added that new legislation could help impose "obligations on operators deemed uncooperative in the removal of illegal content or decryption of messages," as terror threats in Europe remains "very high."

In his commentary, German Interior Minister Thomas de Maizière said that "Some terrorists and criminals are ahead of us on the technology front. That's not right."

The push comes in the wake of a series of bloody terror attacks inspired and claimed by Islamic State across France and Germany. The assaults have ignited a fierce debate over whether tech companies should create 'back doors' for national security officials to access encrypted messages.

Reacting to Tuesday's announcement, Christian Borggreen, the director for Europe at the U.S.-based Computer & Communications Industry Association, warned that any move by the EU to undermine digital security would end up having the opposite effect.

Mr. Borggreen stated that "It is certainly understandable that some would respond to recent tragedies with back doors and more government access. But weakened security ultimately leaves online systems more vulnerable to all types of attacks from terrorists to hackers." For more read the full Wall Street Journal report here.

In July, Senate Armed Services Committee Chairman John McCain warned Google and Apple executives that the Committee "has subpoena power" that could compel them to testify on why their encryption systems on newer smartphones are not accessible to law enforcement operating under court orders.

At the start of the hearing, McCain noted that Tim Cook, president of Apple, declined to attend the session. "This is unacceptable," he noted of Cook's reluctance to appear, as the hearing neared its end.

The Arizona Republican, who chairs the panel, said, "There's an urgency" to finding a solution to the matter of protecting privacy while also not closing out police, prosecutors and intelligence agencies from lawfully pursuing criminals and terrorists.

At that time, McCain indicated at the hearing, that he was leaning toward passing legislation rather than establishing a commission to study the issue.