The U.S. Patent and Trademark Office officially published a series of 46 newly granted patents for Apple Inc. today. In this particular report we cover intellectual property that Apple had acquired from Flyby Media Inc. Regents of the University of Minnesota that has now become a granted patent. The patent titled "Visual-Based Inertial Navigation" covers indoor mapping services. The technology supplements and compliments that which Apple acquired from startup WiFiSLAM back in 2013. The patent covers indoor mapping being communicated on a smartphone or VR headset using VR techniques and unique guidance Virtual Path Indicators that are presented in our cover graphic. The accuracy of inertial navigation is down to mere centimeters.

Today's patent notes that "Visual-based inertial navigation systems rely on information obtained from images and inertial measuring devices in order to achieve localization and/or mapping. Since visual-based inertial navigation systems do not require signals from GPS or cell towers, such systems may be used indoors where GPS and cell signals cannot reach or are unavailable due to interference.

Furthermore, visual-based inertial navigation systems enable very high position accuracy, e.g., on the order of centimeters. However, visual-based inertial navigation systems are typically computationally intensive as they need to process large amounts of image data acquired from an image detector, such as a camera, and inertial readings generated by an inertial measurement unit (IMU), all in real-time. In addition, to achieve highly accurate measurements of position, a history of information related to previous poses (positions and orientations), inertial measurements and image features is typically stored, thus requiring devices to use a substantial amount of memory and consequently large computation time to process this information."

Today's granted patent improves on inertial navigation systems that could be used on a future iOS device and/or virtual reality headset which Apple is reportedly working on.

Apple's patent FIG. 1 noted below is a schematic illustrating a floor plan overlaid with a path 10 computed by an electronic computing device having a visual-based inertial navigation system configured according to the present disclosure. 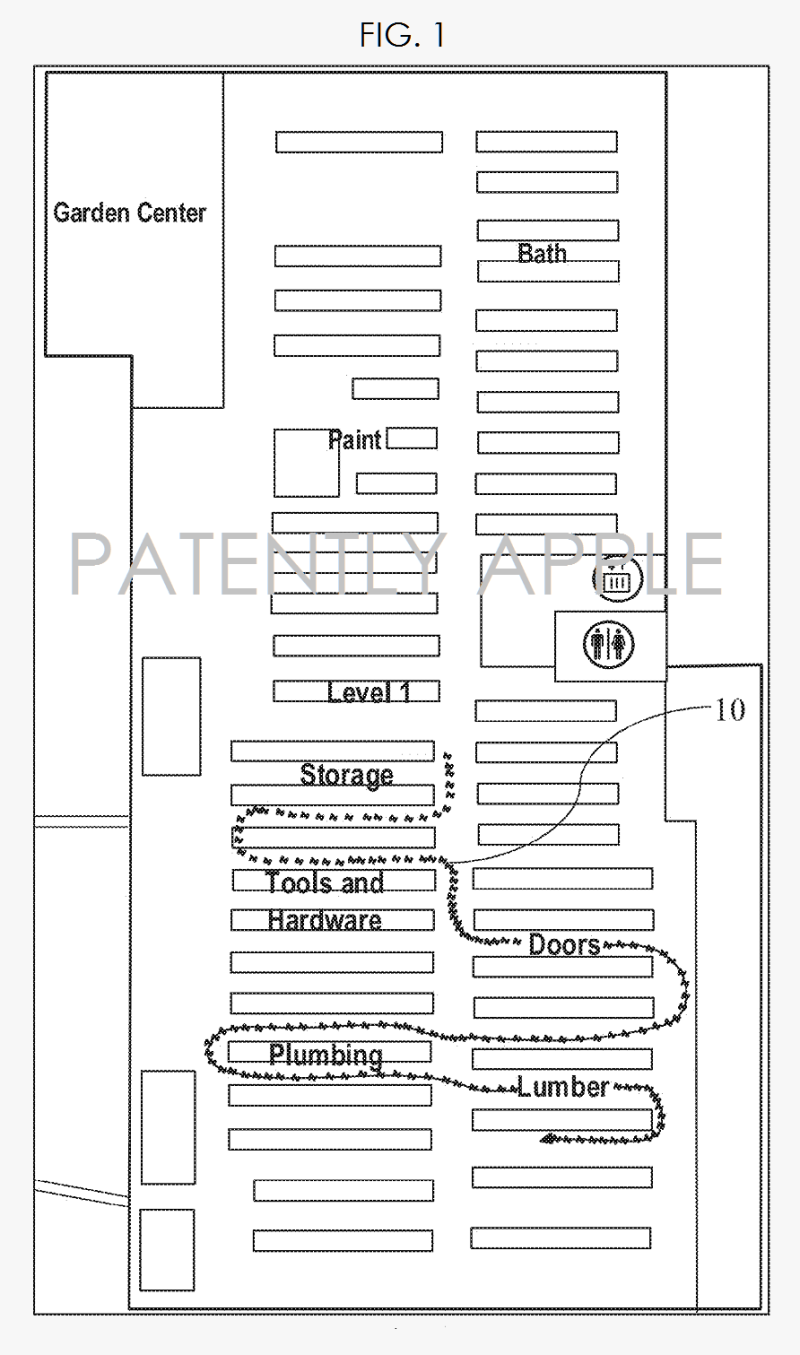 The floor plan noted above is an overview of a hardware store (think Home hardware) including the different sections (e.g., plumbing section, tools and hardware section, etc.), where the shaded regions represent shelves and the white regions represent the aisles and other areas of the store in which a customer may move.

The device may be a portable electronic computing device (e.g., a camera phone, smartphone, smart glasses, a head mounted display, or a surveying device) that records images as the person moves through the store.

The portable electronic computing device also includes an inertial measurement unit (IMU) having components (e.g., accelerometer(s) and gyroscope(s)) that record inertial data such as linear acceleration and angular velocity of the device. During recording of the images and inertial data, the visual-based inertial navigation system calculates and stores estimates of the state of the computing device relative to a starting point, a process commonly referred to as "dead reckoning." The positions may be used to compute the path 10, which is stored in memory of the device and/or overlaid on an image of the floor plan, as shown in FIG. 1, and which can be output to a display for a user to view.

Apple's patent FIG. 10 noted below is an example of an image output by a display of a device that includes a visual-based inertial navigation system, in which a virtual arrow is overlaid on the image. 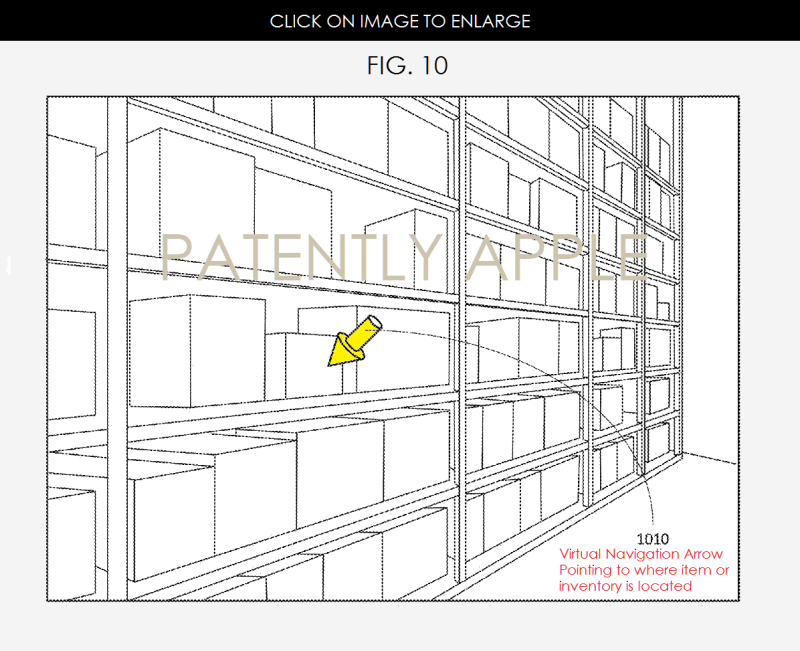 In Apple's patent FIG. 11 noted below we're able to see an example of an image output by a display of a device that includes a visual-based inertial navigation system, in which a virtual path is overlaid on the image. 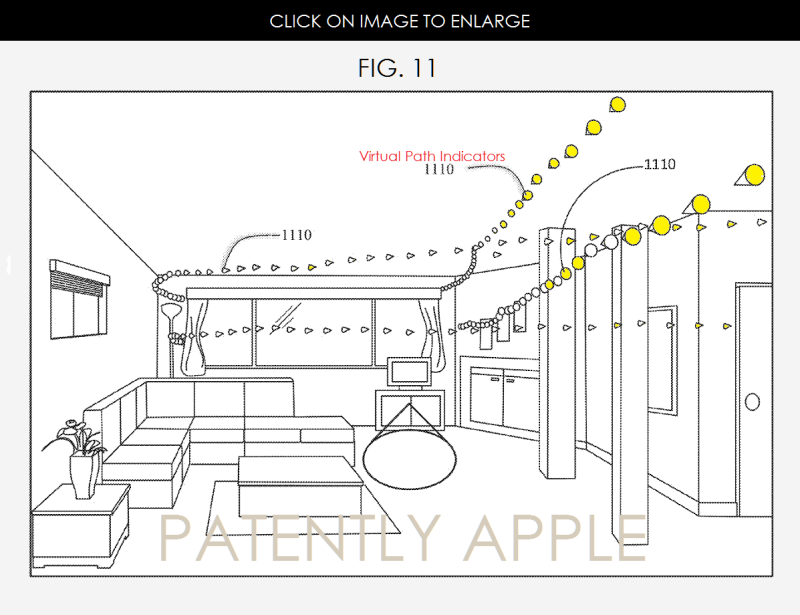 Apple's granted patent 9,424,647 was originally filed in Q3 2013 and published today by the US Patent and Trademark Office. Considering this is an acquired patent, it's unknown what aspects are being considered for future use. To review the invention, click here. Noted below is the original patent application noting "Flyby Media, Inc." 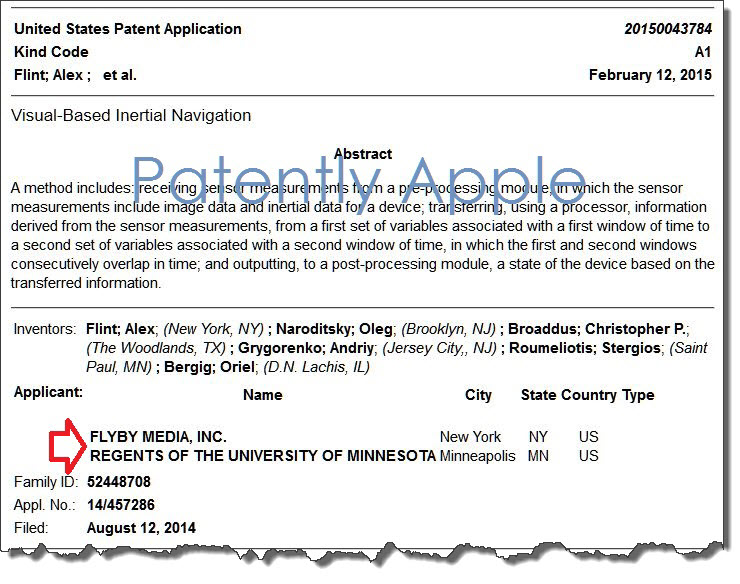 I noted in a report posted back in January titled "Apple's 'Secret' VR Team isn't that Secret Anymore" that Apple's latest acquisition in the area of VR was Flyby Media, an augmented reality start-up that lets mobile devices 'see' the world around them. Flyby's team had worked closely with Google in developing software for its 3D positioning technology Project Tango." Interestingly enough, the key technology behind the original Project Tango was from PrimeSense now owned by Apple.

Other indoor mapping reports include:

Apple and Google Headed for an Indoor Location Services War