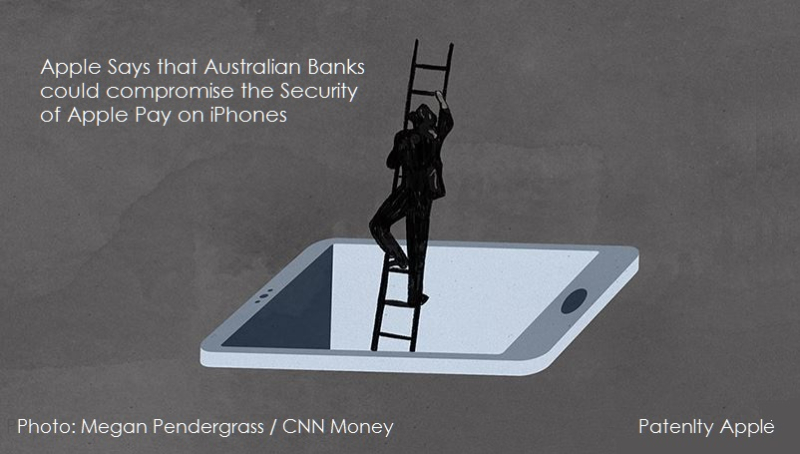 To say that Apple is having trouble getting Apple Pay off the ground successfully in Australia would be an understatement. Back in December Reuters reported that Apple was struggling to persuade Australia's big banks to sign up for its Apple Pay mobile payment system.

Australia's Labor Party lawmaker Ed Husic, who last month wrote a letter to the RBA accusing the lenders of engaging in anti-competitive behavior at consumers' expense. For Husic, the longer the stalemate drags on, the more likely a potential investigation of the banks for anti-competitive behavior becomes. "If it drags on, I think the drum beat for that type of action will grow," he said.

In July, a Reuters follow-up report surfaced titled "Australia's big banks team up to challenge Apple on mobile payment apps," wherein they noted that Australia's three biggest banks, including no. 1 lender National Australia Bank, said they had lodged a joint application with anti-trust regulators seeking approval to collectively negotiate with Apple to install their own electronic payments applications on iPhones.

Apple, which operates its own Apple Pay mobile wallet, does not allow third-party electronic payment apps to be loaded onto to their hugely popular smartphones. The banks are seeking to be able to negotiate jointly for access to Apple's phones without themselves being accused of violating anti-competition law.

Today, the Australian Financial Review reports that "Apple has launched a blistering attack on three of Australia's big banks, saying their request to collectively negotiate over digital wallet access to the iPhone will compromise the handset's security, reduce innovation and blunt Apple's entry into the payments market in Australia.

In a sign of growing acrimony between the world's largest company and the Commonwealth Bank of Australia, National Australia Bank and Westpac Banking Corp, Apple told the Australian Competition and Consumer Commission (ACCC) that 'allowing the banks to form a cartel to collectively dictate terms to new business models and services would set a troubling precedent and delay the introduction of new, potentially disruptive technologies.'

In a three-page submission to the ACCC, Apple says providing access to the phone's transmitter to allow bank applications to facilitate contactless payments would compromise the security of Apple's hardware.

'Apple upholds very high security standards for our customers when they use Apple devices to make payments. Providing simple access to the NFC antenna by banking applications would fundamentally diminish the high level of security Apple aims to have on our devices.

'Unfortunately, and based on their limited understanding of the offering, the [banks] perceive Apple Pay as a competitive threat. These banks want to maintain complete control over their customers. The present application is only the latest tactic employed by these competing banks to blunt Apple's entry into the Australian market,' said Apple in a document signed by Marg Demmer, a former cards executive at ANZ Banking Group.

Apple said the banks want to force Apple to accept their terms, including allowing them to charge consumers that choose to use Apple Pay. It said it had 'struggled' to negotiate agreements with the other Australian banks, although it is currently in negotiations with some Australian institutions.

It told the ACCC that the banks had relied on "innuendo and misstatements" in their submission and "if granted, the request would harm consumers, lead to less competition and less innovation, and create a troubling precedent." For more on this, read the full Financial Review report here.