In this particular patent report we're not going to show you a new device but rather a few inventions that will show you the details behind varying processes of making a product that most of us never think about. Apple is a premium device maker and so it's only appropriate that once in a while we illustrate the depths that they'll go to get a product just right; the depths of refinement so that it has just the right finish. The first patent covers the making of the Milanese Mesh Apple Watch band. Who knew that Apple had an in-house watch manufacturing design engineer manager by the name of Justin Sawyer, who oversees a team of engineers working on manufacturing process development of Apple Watch enclosure parts (all sizes/materials) and the Milanese Mesh watch-bands? The team's goal is to develop and scale world class manufacturing processes to meet strict design requirements. The second patent herein points to Apple's invention titled "Processes to reduce interfacial enrichment of alloying elements under anodic oxide films and improve anodized appearance of heat treatable alloys." Okay, it's about making the metal finishes on MacBooks, the iPad and iPhone look and feel like a million bucks so as to lure customers to touch a product in an Apple Store and instantly fall in love with it.

A Milanese mesh structure (sometimes called a "carpet"), as illustrated for example in FIG. 1A below, is a decorative mesh typically made from multiple metallic spiral wires threaded together. The wire utilized in forming the spirals, typically has a circular cross-section. The mesh carpet is sometimes used to make necklaces, bracelets, or other decorative accessories.

Once the mesh carpet is formed, it is cut into various shapes depending on the end product. Typically, the product is formed of relatively short pieces of mesh. The pieces of mesh may be manually bound into a long strip utilizing another spiral of equal strength to join the discrete pieces together. The edges may then be processed to remove sharp and uneven coil ends. In this form the mesh is unstable as the individual coils can be removed. As such, the material may be locked so that the individual coils movement is significantly limited and the mesh carpet is secure. The locking is accomplished by pressing the strip flat and thus deforming the shape of the round coils.

Once locked, the mesh may be further processed to provide flexibility. The mesh may pass through a machine with cylinders that oscillate or otherwise move up and down, thereby forcing the mesh strip to bend back and forth. This treatment makes the mesh flexible but also often leaves visible lines in the mesh from contact with the internal cylinders of the machine.

Other processing steps may be used to improve the overall aesthetics of the mesh. For example, a folding clasp and/or end pieces may be formed by stamping the ends. The mesh strips may also undergo a polishing to enhance their appearance.

Typical manufacturing process for Milanese mesh devices do not allow mesh carpets that are created to be flexible without the crimping of the mesh and or introduction of the intervening binding and locking coils discussed above. Thus, there is a need for a improved method for forming a Milanese mesh product. 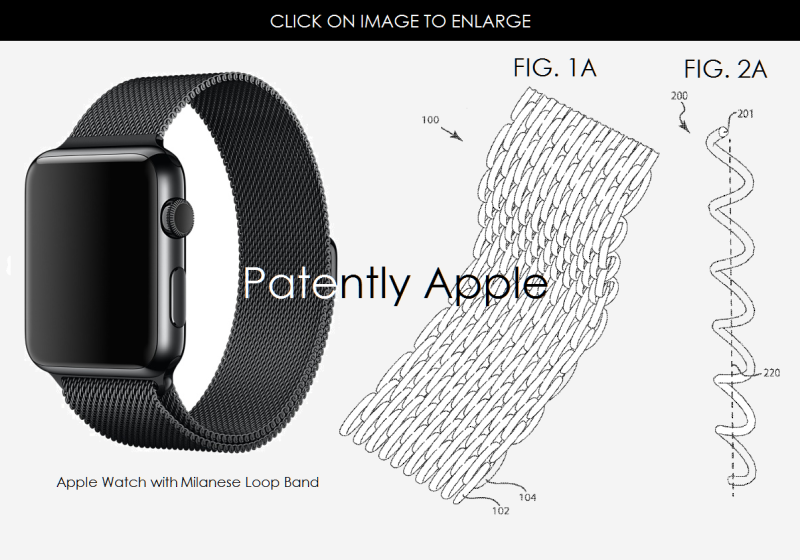 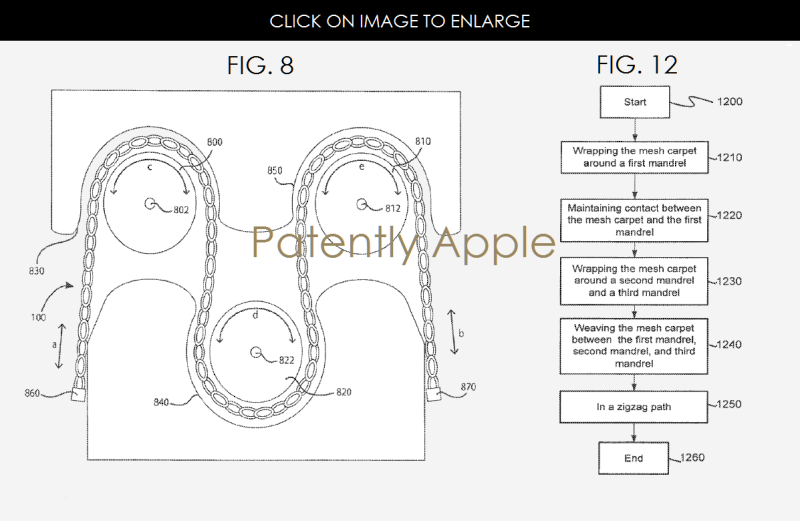 Apple's patent generally relates to anodizing systems and methods. In particular, systems and methods for improving the cosmetics and enhancing physical characteristics of anodic oxide films formed on metal alloy substrates are described.

Unfortunately, in some cases where certain metal alloy substrates are used, the anodic oxide coating can peel, chip or otherwise delaminate from their metal substrates when exposed to scratching or scraping forces during normal use of the part, or even during certain manufacturing operations such as drilling or machining which might be performed after anodizing.

Apple's detailed patent filing describes the various stages of processes to eliminate the problems of coatings delaminating and discoloring over time and more. To view the patent filing in depth, click here. 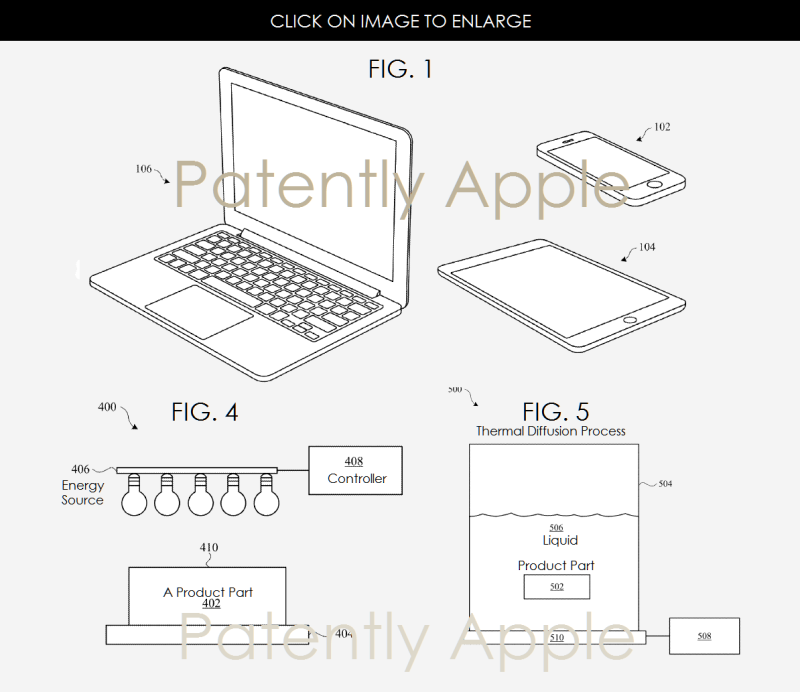