Prior to Apple's chapter with GT Advanced Technologies to produce sapphire glass for future devices, Apple had invented a new way of manufacturing near defect-free sapphire designed for iOS devices like the iPhone. In fact Apple has many patents relating improving and working with sapphire glass. Today, the U.S. Patent and Trademark Office published a patent application from Apple titled "Electronic Devices with Sapphire-Coated Substrates." The invention is designed to add a sapphire coating to future OLED displays like those that will begin shipping in 2017 and beyond. Our cover graphic reveals an Apple patent figure which implies that OLED displays may be headed for future Macs as well.

Apple invention covers an electronic device with a housing such as a metal housing in which a display is mounted. The display may be protected by a transparent cover layer. The transparent cover layer may include a laser-annealed sapphire coating on the outer surface of a transparent substrate (e.g., a glass substrate). The sapphire coating may provide the display with a hard, scratch-resistant outer surface. Display layers such as an organic light emitting diode (OLED) display module may be laminated to the inner surface of the transparent substrate. 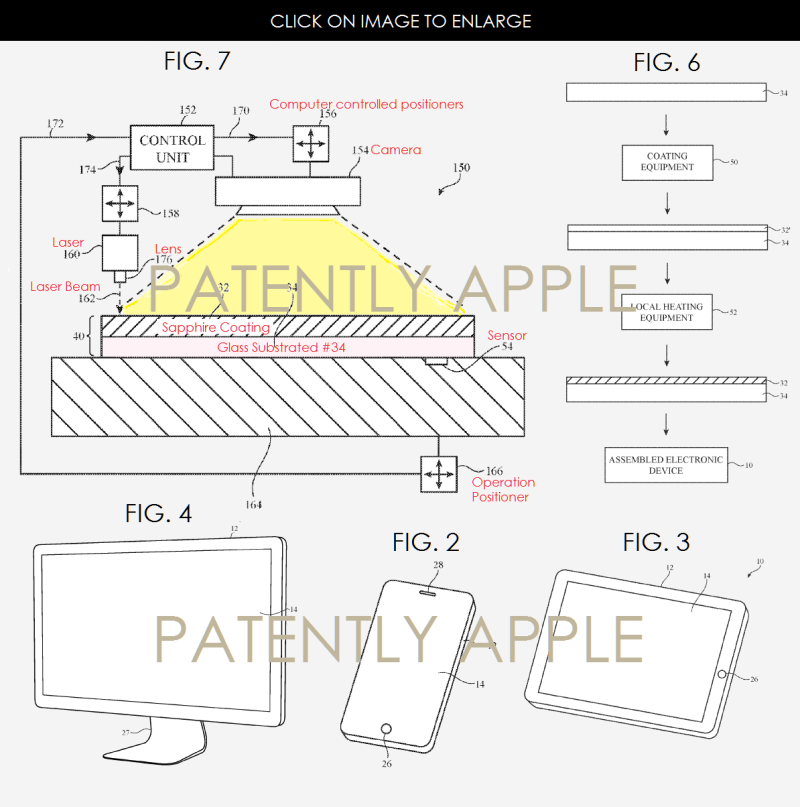 Apple's patent FIG. 7 is a diagram of an illustrative system in which laser-based local heating equipment is being used to transform an aluminum oxide coating on a substrate into crystalline sapphire with minimal thermal impact on the substrate; FIG. 6 is a diagram showing illustrative steps involved in forming an electronic device having a display cover layer formed from a sapphire-coated substrate; and FIGS. 2, 3 and 4 illustrate the range of products the new sapphire coating/OLED display could apply to.

Like all patents, Apple makes it clear that the invention could apply to a wide range of future devices such as Apple Watch, a television and other wearables.