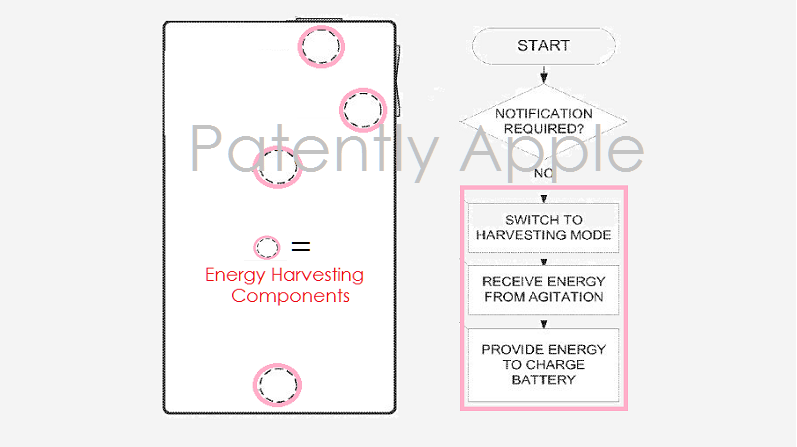 Today, the U.S. Patent and Trademark Office published a patent application from Apple that generally relates to providing haptic feedback from energy harvesting components, and in particular, to techniques for providing tactile feedback from an element which harvests kinetic energy in iOS devices. There's an industry wide effort in this area of technology to incorporate energy harvesting components in future devices. Our other IP blog, Patently Mobile, has reported on such efforts found in patents from Microsoft (one and two) and Samsung. While consumers are really hoping for an all-new energy source solution like fuel cells that will deliver sufficient power to mobile devices that will last for days on end, industry players are working on interim solutions such as energy harvesting.

In many cases, vibration elements must be of a certain size and mass in order to vibrate at sufficient magnitude, Due to the compact, lightweight design of many portable devices, only one vibration element is generally provided.

Portable electronic devices also include a power source. Rechargeable batteries are often used. Recently, rapid development of advanced functionality has increased power requirements at the same time market preference for compact, durable, and lightweight devices has decreased the internal volume that batteries and other components may occupy. As a result, batteries in many portable electronic devices occupy upwards of fifty percent of the interior volume of a device housing.

Consequently, power capacity has become a substantially limiting factor in the advancement of features of portable electronic devices. In many cases, a portable device must be recharged regularly for advanced functionality to be fully enjoyed. To mitigate depletion of power between recharging cycles, the battery charge may be augmented by harvesting and converting energy from various sources such as solar power, kinetic energy, or ambient electromagnetic energy. However, including energy harvesting components within existing portable electronic devices has necessitated substantial design revisions. For example, affixing a solar panel to a device encourages a user to place the device in directly sunlight, potentially resulting in undesirable thermal damage to other components within the device. In another example, some components may be decreased in size or removed entirely to accommodate the addition of an energy harvesting component, exchanging device functionality for operational longevity. 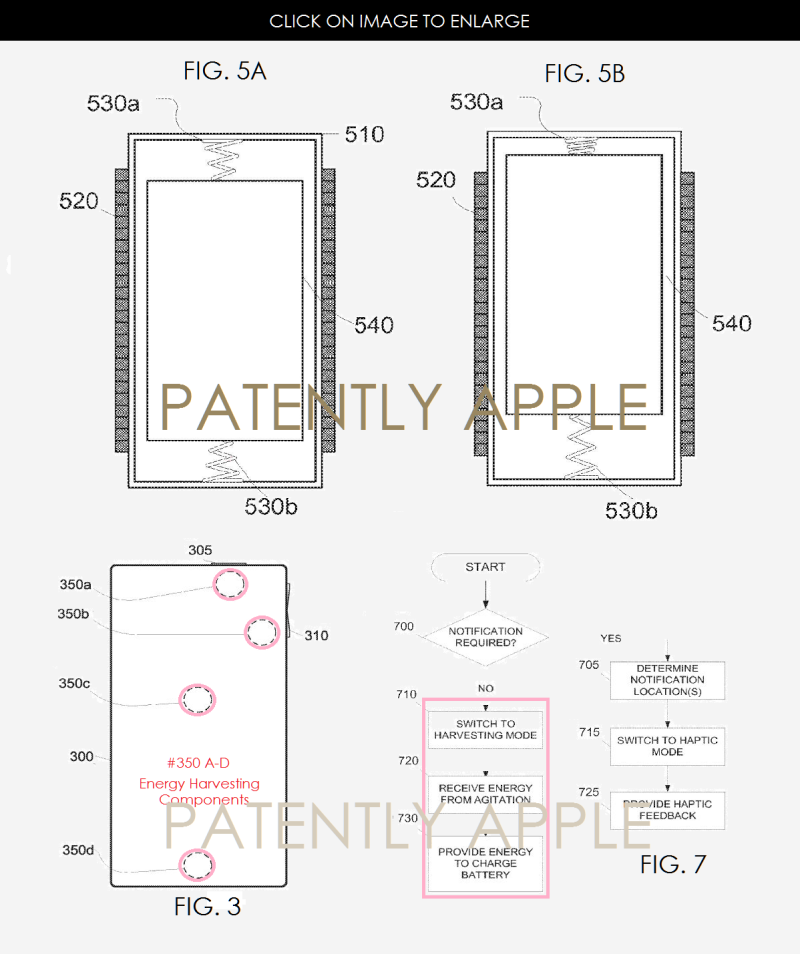 Apple patent application 20160241119 was filed in Q1 2016 with history going back to Q3 2013. The sole inventor listed on the patent filing is Kevin Keeler who was Apple's Reliability Engineering Manager right up to April of this year when he left to work in Reliability with Facebook's Oculus VR. Considering that this is a patent application, the timing of such a product to market is unknown at this time.