Today, the U.S. Patent and Trademark Office published a patent application from Apple that reveals a future Apple Watch band having embedded haptic actuators to provide users with stronger feedback to notices and more. The core Apple Watch component can communicate with one or more haptic actuators in the band which would allow Apple to have more room within the Watch to either add new components like a camera or to make the Watch thinner.

Apple notes that a processing device can be included in the electronic device that transmits activation signals to the haptic actuator or actuators. Each haptic actuator can produce a selected force (e.g., pressure), motion, and/or vibratory response into a surface of the band, thereby providing tactile stimulation to the skin of the person wearing the band.

An activation signal can be sent at select times to a single haptic actuator or to groups of two or more haptic actuators. Haptic stimulation can act as notifications for one or more events, such as the receipt of an email, a text message, a news story, a stock price, a reminder, and/or a low power state of a power source in the electronic device. 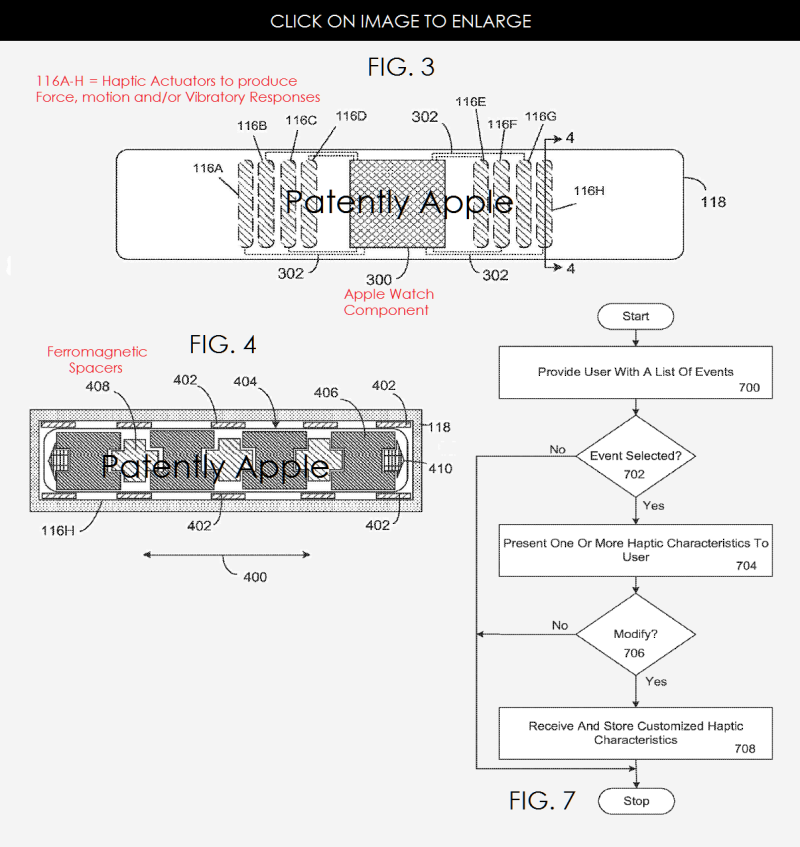 More specifically, Apple's patent FIG. 7 is a flowchart of a method for customizing haptic feedback for one or more haptic actuators in a band. Initially, a list of events can be presented to a user at block #700. The list of events can include events that can be generated or received by an electronic device. The list of events can be associated with an application and/or function running on, or connected to the electronic device. A wearer of the band can be notified of one or more events with haptic feedback. For example, haptic feedback can be produced when an email or text message is received, when a voicemail or call is received (when the electronic device is a mobile telephone), when the power source (e.g., 112 in FIG. 1) is in a low power state, when a navigation program provides turn-by-turn directions, and/or when an emergency alert is received. Haptic feedback can be used to notify a wearer of an upcoming meeting or activity scheduled in a calendar program.