Apple Invents a Dendrite-Resistant Battery that Reduces Overheating and More

Battery life is such an issue these days. As Apple adds more features to the iPhone 7 next month and beyond, the battery life issue will be front and center even if it's not as sexy as a dual lens 3D camera. While tech companies like Apple are exploring the possible use of fuel cells for mobile devices down the road, it's safe to say that it's not likely to be on Apple's short-term road map. Apple's various engineering teams are intelligently working on both smarter CPU based solutions as well as battery improvement solutions to squeeze more life out of batteries as humanly possible. They're also working on ways, such as found in this invention, to ensure that batteries that are working harder in smaller spaces are designed with safety in mind.

Look at the great improvement that Apple made with their latest iPhone 6s 1715mAh battery versus the previous iPhone 6's larger 1810mAH battery illustrated below in a chart prepared by PhoneArena.

With a smarter battery, Apple's iPhone battery life went from the bottom of the pack with 5 hours 22 minutes of life to number three with 8 hours and 15 minutes … all with a slightly smaller battery.

On Thursday we posted a patent report titled "Apple Invents an Energy Harvesting Component to Augment Battery Power for iOS Devices." This is another area that Apple is exploring to expand battery life for mobile devices I the future.

Other revelations surfaced this week at the U.S. Patent and Trademark Office focused on extending the run time for mobile devices. The second patent covers battery technology and specifically designing a "Dendrite-Resistant Battery." So what is Dendrite to begin with?

Apple's patent background explains what dendrite is and the problems that it causes in robbing battery life. Apple notes that as mobile devices "become increasingly smaller and more powerful, the batteries that are used to power these devices need to store more energy in a smaller volume.

A commonly used type of rechargeable battery is a lithium battery, which can include a lithium-ion battery or a lithium-polymer battery. Some lithium batteries may be thin-film batteries with a solid electrolyte. Lithium-ion and lithium-polymer batteries typically contain one or more cells that include a cathode current collector; a cathode comprised of an active material, a separator, an anode current collector; and an anode comprised of an active material. The cathode can comprise a cathode coating, and the anode can comprise an anode coating.

When a lithium dendrite reaches the cathode, an electrical short circuit (also "short" herein) can be established between the electrodes via the lithium metal comprising the lithium dendrite. Such an electrical short can result in failure of the battery and can further impose a safety risk due to overheating of the battery due to the short circuit, which can further lead to a fire."

Apple's invention addresses the build-up issue lithium metal structures or "dendrite. Apple notes that devices and methods presented in their patent application may be applied to resist, impede, suppress, and/or prevent one or more dendrites from causing a short circuit between the electrodes of the cell. 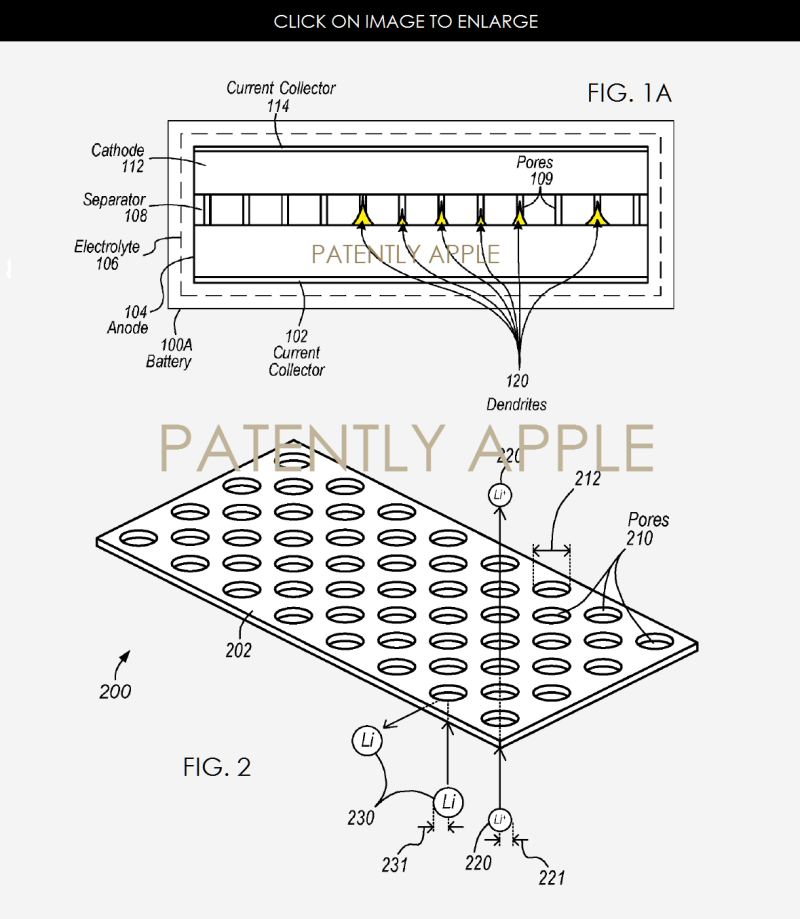 Apple's patent FIG. 1A illustrates a lithium battery that includes dendrites growing between electrodes in the respective batteries; FIG. 2 illustrates a perspective view of an electrochemically-neutral porous layer that is configured to permit lithium ion transport and suppress lithium dendrite growth. 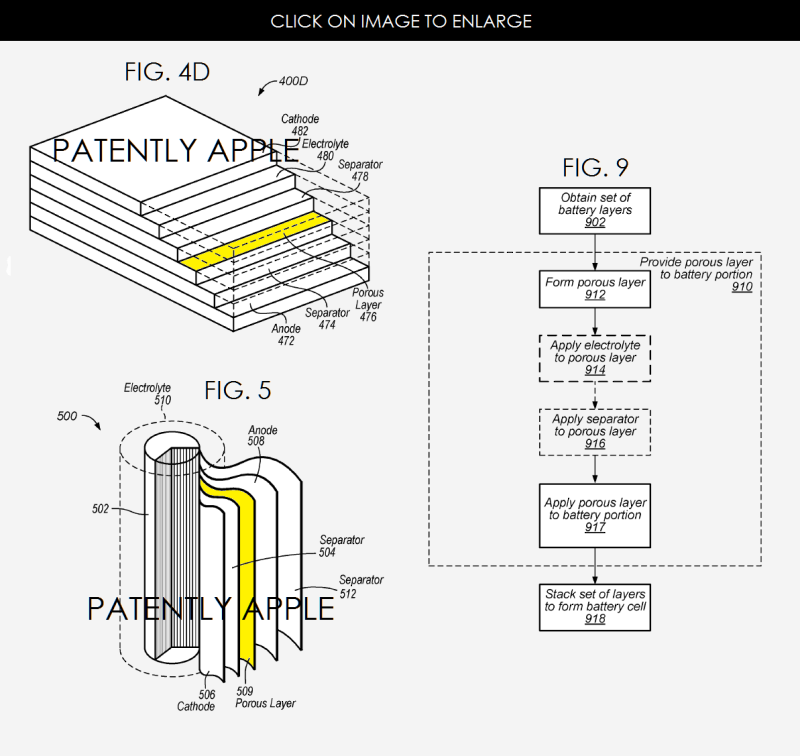 Two of the four inventors listed on this patent filing are engineers that Apple hired from a company called A123 Systems that sued Apple back in February 2015 for employee raiding and misappropriation of trade secrets. Apple moved quickly to resolve the matter starting in March and then finalized a deal in May.

The first hire listed on the patent application is Shouwei Hao who is now an Apple Manager of a global team responsible for Battery Cell development for all of Apple's mobile devices. The second hire is Jie Guan, Technical Program Manager at Apple. Guan Led A123's materials R&D for high power and high energy cells. Interestingly Guan worked on fuel cells at both GE and Honeywell, an area of battery development that Apple has shown to be interested in as we noted at the top of this report.

Whether today's revealed technology and methods are in use today or are yet to be applied is unknown at this time.