The U.S. Patent and Trademark Office officially published a series of 80 newly granted patents for Apple Inc. today. In this particular report we cover Apple's invention relating to the iPad Pro's "Continuous handwriting UI." Patently Apple originally covered this as a patent application in a report titled "Apple Advances their Future iPen with a Continuous Handwriting UI & Processor System." See that report for more details.

Apple's granted patent provides a device such as the iPad Pro that receives handwriting input in a handwriting area and displays recognized text for the input in a text area of the device.

The handwriting area provides a region where a user can draw or write a handwritten input. The touch-sensitive display can display one or more virtual keys, buttons, or the like, to provide additional functionality. In some implementations, the additional keys include a delete (or backspace) virtual key for deleting the last input character and re-displaying a previously cleared handwritten input thus giving the user the ability to modify their handwritten input even after it has been cleared from the handwriting area. Other keys include a space key for entering white space and/or accepting recognized text, a return key for entering a line break or the like, and a numbers and punctuation keyboard toggle key for toggling between the handwriting area and a virtual keyboard with number and punctuation keys. In some implementations, the UI includes a virtual button for switching amongst the handwriting recognition user interface and virtual keyboards for various languages. 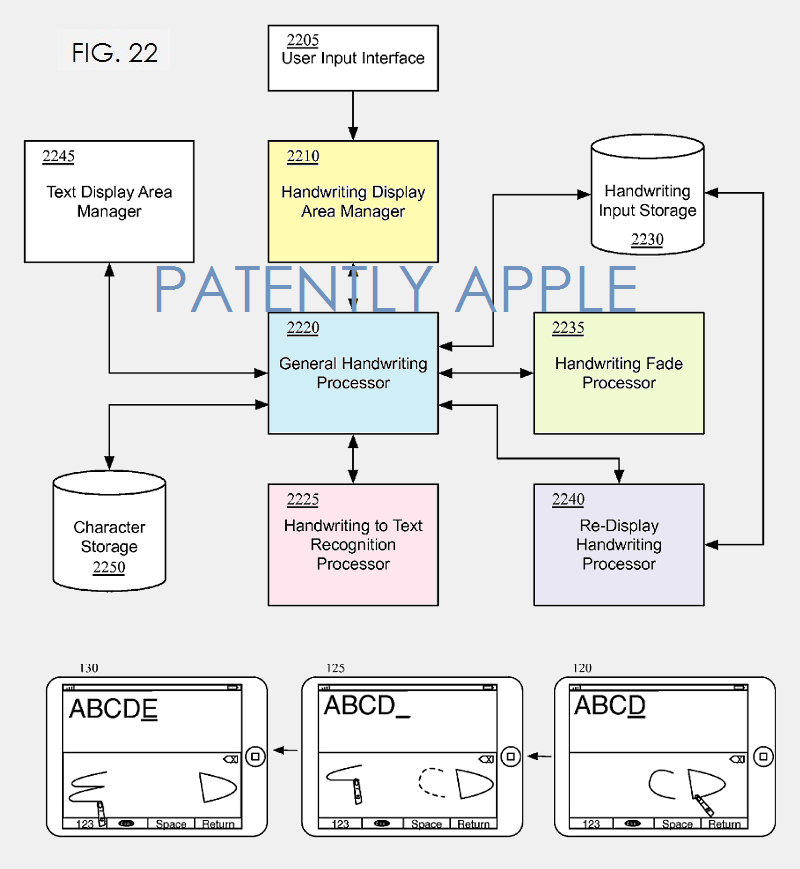 Apple's granted patent 9,411,508 was originally filed in 2014 and published today by the US Patent and Trademark Office. Apple lists Deborah Goldsmith and Karan Misra as inventors of this patent.