The U.S. Patent and Trademark Office officially published a series of 80 newly granted patents for Apple Inc. today. In this particular report we cover Apple's invention for a future iPhone that will have a curved display forming active sidewalls with virtual buttons. It's been rumored for months that Apple's 2017 anniversary iPhone will introduce a new form factor that includes curved glass. The concept supports Apple's 2013 patent filing which was way ahead of Samsung introduction of their Galaxy Edge smartphone. In fact it makes you wonder if Samsung got the idea for their curved edged smartphone from Apple.

Apple has already been granted two patents on this invention in 2015 (one and two) but they continue to refine the patent claims to ensure that the invention is properly covered legally and that it reflects a current design that they're working on. The three patent claims below are the ones that stood out as having been added and/or modified. Mainly Apple is now clearly identifying the generic description of "device" to the specific device being a "cellular telephone" – which is of course is Apple's iPhone. 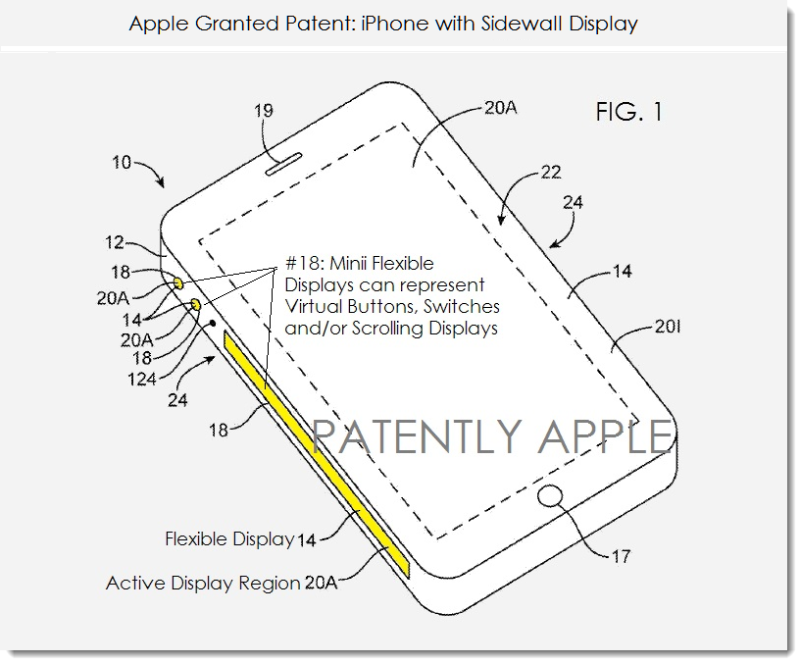 Apple's patent FIG. 1 is a perspective view of an illustrative electronic device with a flexible display having portions on multiple surfaces of a device.

Apple's patent FIG. 5 is a perspective view of a portion of an illustrative electronic device showing touch-sensitive edge displays on an edge of the device formed from a portion of a bent flexible display.

Could this design concept be a part of the 2017 anniversary iPhone? While only time will tell, tweaking an invention three times in 15 months certainly indicates that it could play a role in some capacity.

And one more thing: Apple's 2013 glass iPhone patent hinted at using liquid metal based glass with aluminum powder that would make it far stronger than other forms of glass on the market today (in theory).