The U.S. Patent and Trademark Office officially published a series of 46 newly granted patents for Apple Inc. today. In this particular report we cover a Prioritizing Beacon Messaging system for iOS devices and cover a few key design patents like the iPad Air and a gaming headset. To wrap up this week's granted patent report we provide you with our traditional listing of the remaining granted patents issued to Apple today.

In Apple's patent FIG. 1 illustrated below we're able to see a plan view of an example operating environment 100 representing a retail store that includes beacon devices #110 a-g that can broadcast beacon messages 150a-g to mobile devices 102a-b using short-range communication links. Other environments could include museums, sports arenas, restaurants and the like. 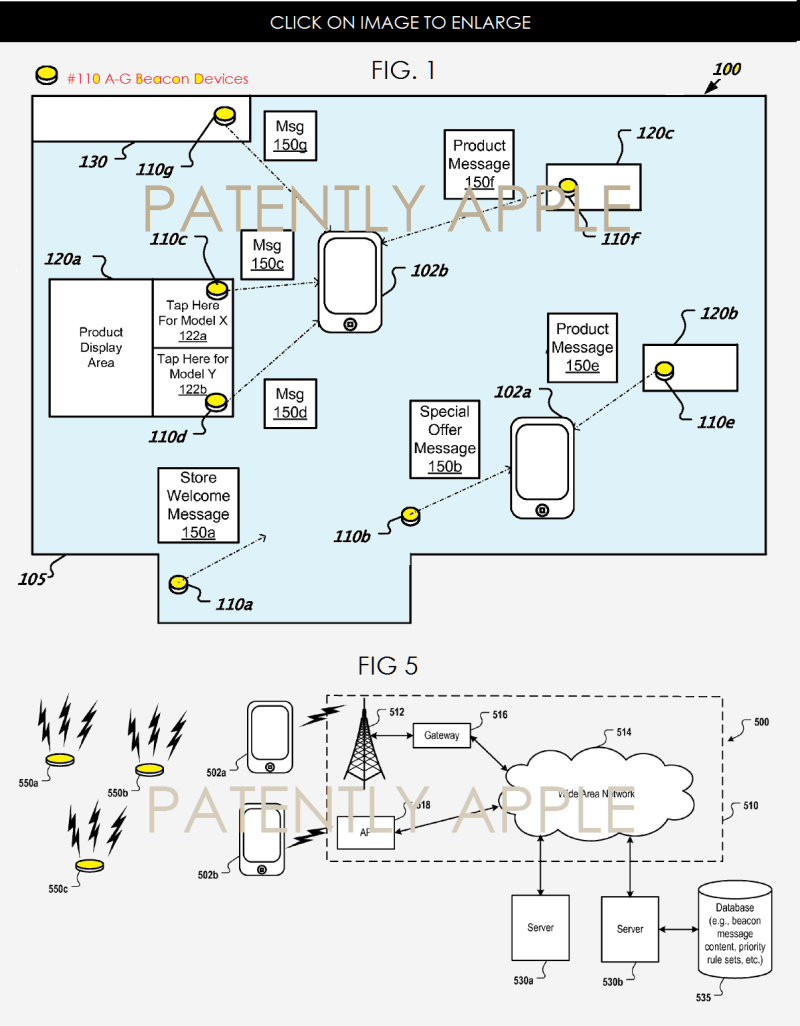 Apple further notes that "In some implementations, beacon messages can be displayed by a user's mobile device based on one or more rule sets, priority preferences, priority configurations, and contexts generally based on proximity of the mobile device to beacon devices, user or environment context, timing, message frequency, inter-beacon border rules and the like. For example, in a beacon-equipped retail store an initial "welcome to the store" beacon message may be repeatedly received by a customer's mobile device from a beacon device near a store entrance, but is desired by the store operator to be displayed on the mobile device only once in a given time period (e.g., once per day) so as not to annoy the customer with redundant displays of the same welcome message.

In some implementations, message priority can be determined based on context such as a user's reason for visiting the environment.

In some implementations, a message priority can be determined based on context and proximity. Context information can include a user's activities before arriving to the environment (e.g., ordered a product to pick-up, scheduled an in-store consultation, scheduled a repair drop-off/pick-up) or what a user is doing while in the environment (e.g., the type of mobile device being used, the type of device the user is interacting with) can be used to determine message priority.

To review Apple's granted patent 9,426,615 in more detail, click here. Apple filed for this patent back in January 2015.

Apple was granted 16 design patents today. The key designs cover the iPad Air the Beats Gaming Headphones as illustrated below. 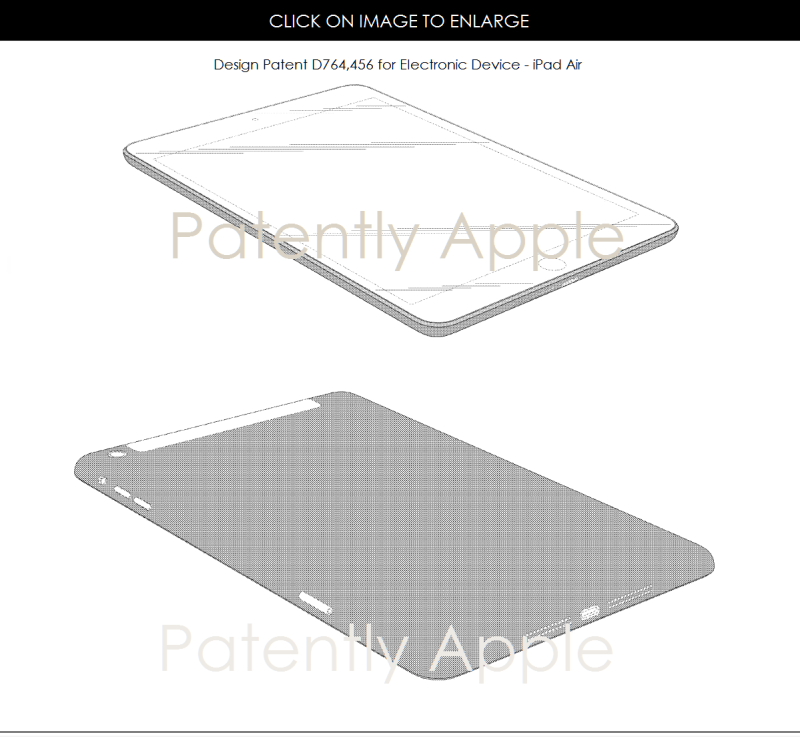 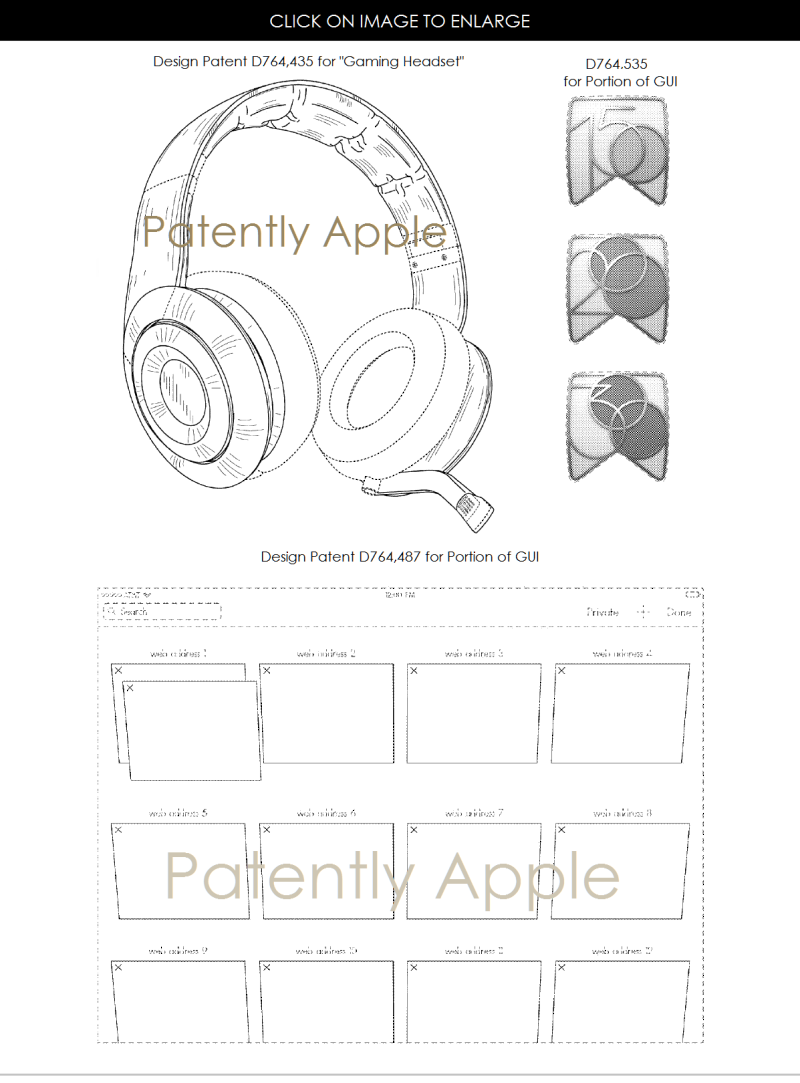 Apple was also granted more design patents for the Apple Watch Band Attachment along with designs for the Milanese Loop and Modern Buckle Apple Watch Bands; the iPod nano 7th generation face-plate; and various other portions of GUIs. 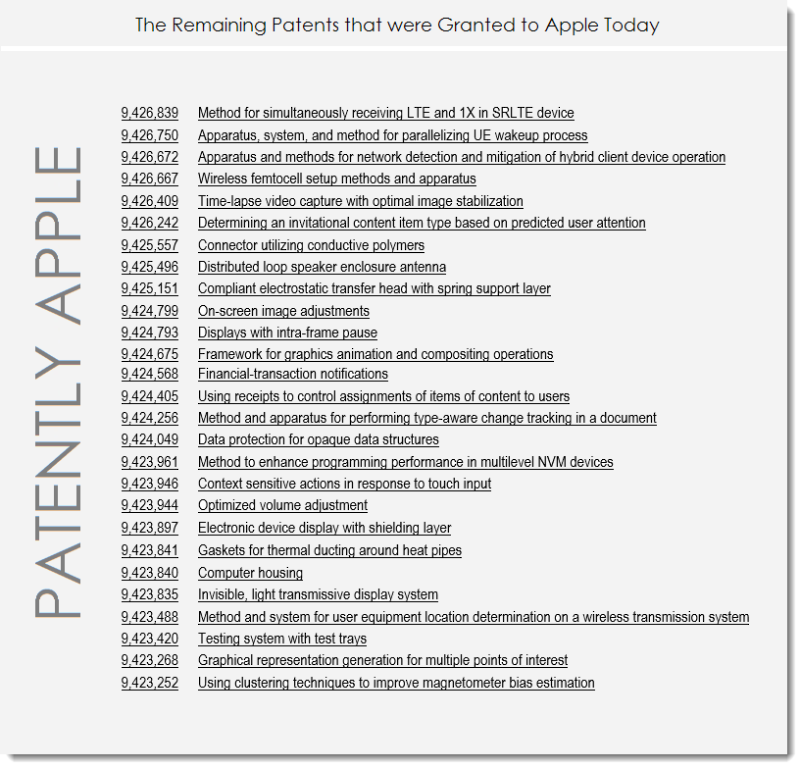