Back in 2012 the U.S. Patent and Trademark Office published a patent application from Apple that revealed what I call a master patent regarding an Apple iPad accessory cover. These types of patents are rare but when one surfaces they're most fascinating because we get to see an overview of what a particular Apple engineering team can see a particular invention evolving to over time. This week the U.S. Patent Office published a patent application of Apple's that is an offshoot of their master patent that we covered back in a 2012 report titled "Apple Invents Mind Boggling Next Generation Smart Cover with Multi-Touch Flexible Display, Solar Panels & Built-in Keyboard."

Apple's first master patent offshoot came in 2014 when they focused on what turned out to be the iPad's 'Smart Keyboard.'

There's still room to evolve Apple's 'Smart Keyboard' because that invention also covered adding Multi-touch capabilities to the keyboard as described in that patent filing.

In this week's 'continuous patent' filing we learn that this new patent offshoot is deadly focused on adding a secondary flexible display to the Smart Keyboard as noted below in patent FIG. 5.

In a continuation patent it's key to review its patent claims. This is where the changes occur. Sometimes the update is so minor that's it's really more of a technicality update so as to appease the patent examiner so that the invention could become a granted patent. We never report on those to waste our reader's time.

In other cases, like the one this week, we see that Apple is deadly focused on protecting new patent claims for a possible evolutionary addition to their Smart Keyboard.

In Apple's first patent claim they completely veer off from the master patent's original first claim found in application #20120194448. In this week's application, Apple states the following:

The other key and relevant additions to the patent claims are covered in claims 2 to 5 as noted below:

Claim #3. The electronic device of claim 1, wherein the second display is configured to present a virtual set of keys that defines an application toolbar.

Claim #5. The electronic device of claim 3, wherein the second display is capable of receiving a multi-touch gesture configured to move an application from the application toolbar to the first display.

For patent FIG.5 Apple notes that "The Even more functionality can be added to flap portion #420 by configuring it with flap screen #504, positioned either above (as shown in FIG. 5) or below the keyboard.

When configured above the keyboard the flap screen could allow for customized virtual keys to be added specific to each application, or could be used as a way to display additional application data.

When the flap screen is configured below keyboard it could act as a replacement for a touch pad, bringing the experience even closer to a conventional laptop configuration. With this configuration a cursor can even be implemented in applications where useful.

It's a Consistent Apple Theme of Late

In May we reported that Apple's MacBook Pro could gain a touch bar at the top of the keyboard that would replace the physical function keys. Shortly thereafter some artistic renditions surfaced illustrating the new feature extending through to Apple's magic keyboard. Apple's continuation patent application that surfaced this week shows us the continuity of this idea even extending through to a future version of the iPad's Smart Keyboard. 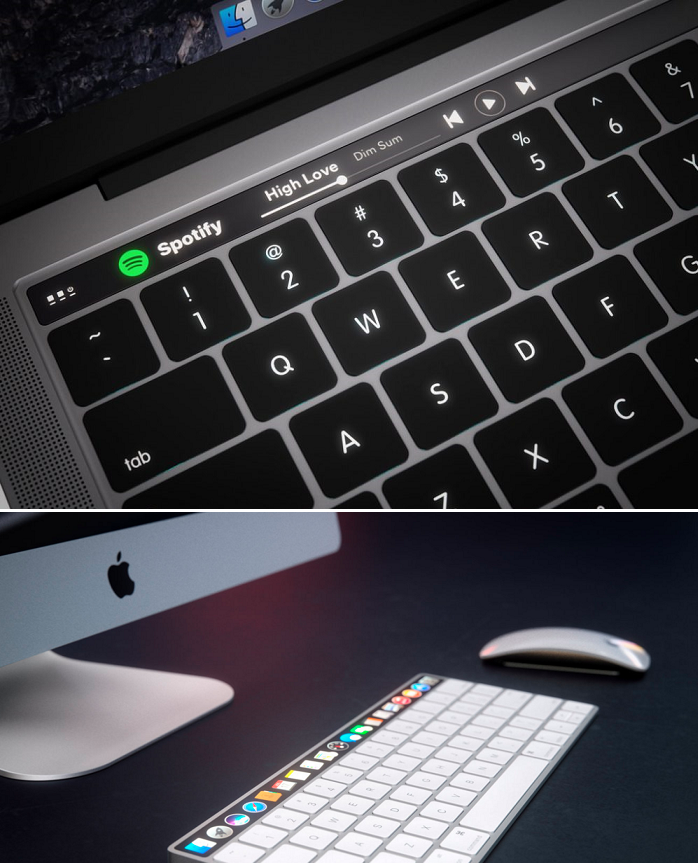