In 2013 Bloomberg reported that John Morrell had left his post at Yale University to join Apple. Morrell, a robotics whiz and one of the leading engineers behind the Segway, had been tapped as director for Yale's newly opening Center for Engineering Innovation & Design. This center marked a play by Yale to reinvigorate its engineering and applied sciences efforts. Some who knew Morrell were hoping that he'd work on something dreamy like building a robot that transforms health care, or crafting the first mind-bending consumer 3D printer, or devising something far more spectacular. Well, will you settle for Apple's Taptic Engine? Morrell first showed up in a 2015 patent filing that we reported on titled "The Apple Watch's Digital Crown Patent Comes to Light." This week a pair of new patent filings came to light with Morrell as the lead engineer in both covering 'Pop' and 'Tap' haptic effects.

Even though Apple chose to focus the design patent figures on a MacBook Trackpad as the vehicle for applying this technology, the fact is that the design is also noted as being for other Apple products such as the housing of a tablet computer, mouse, and so on or touch pads of a tablet computing device, and a wearable device such as a watch, glasses, and so on.

In the second patent application 20160216764, Morrell is lead as well. The invention is titled "Devices and Methods for Creating Haptic Effects." Here Apple describes a new haptic "pop effect."

Apple notes in their filing that "According to one broad aspect of one embodiment, a haptic feedback system for a portable device" is revealed "wherein the system includes a mechanism configured to produce a haptic pop effect and a controller electronically coupled with the mechanism to selectively activate the mechanism. In one example, the mechanism has a first normal state having mechanical energy stored therein, and a second state wherein said mechanical energy is released, thereby creating the haptic pop effect.

Apple further noted that "When a haptic pop effect occurs, a user holding, manipulating or otherwise in contact with the portable device experiences or feels the temporary movement of the portable device. Haptic pop effects as described herein can be provided within a mobile device in addition to or as a complement to traditional tactile feedback effects such as vibrational effects. In portable electronic devices, especially very small ones, a haptic pop effect allows a powerful haptic punch to be delivered to the user. This punch or pop effect is unlike any sensation that can be created with traditional actuators in the same amount of space.

So, where could Apple take haptics next beyond taps and pop effects? Another Apple patent application (20160216766) surfaced this past week titled "Touch Surface for Simulating Materials." The odd thing to this is that Apple was granted this patent back in 2015. I couldn't readily find any changes that were made to the granted patent, but there must have been and it shows that Apple's advanced haptics team is preparing next level effects for future Apple products. 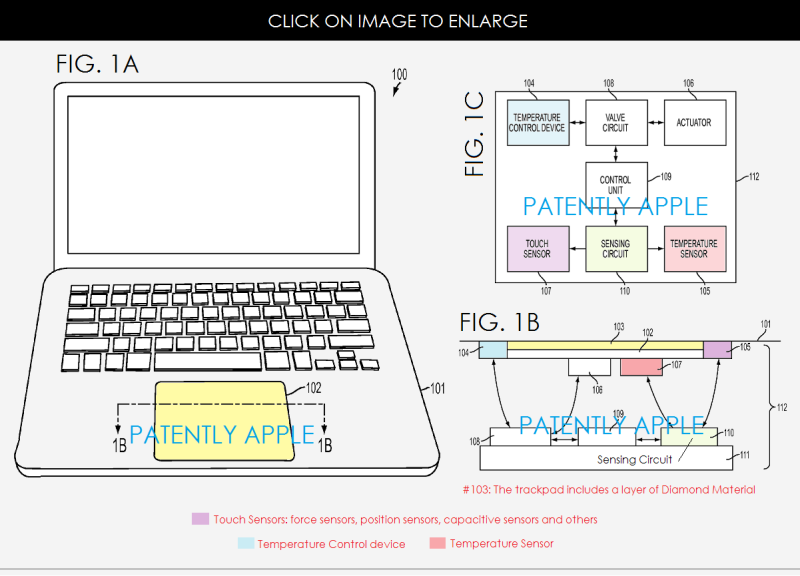 Earlier this month another patent surfaced relating to sensing texture. We covered it in our report titled "Apple Invents an Incredible Stylus with Texture Sensing Capabilities" and more.