Last week Patently Apple posted a report titled "Microsoft's Paranoia of Apple's Gaming Intentions has ushered in Project Scorpio." Microsoft wants to take gaming to the next level which means driving 4K gaming to the mainstream market. It's partly to fend off Sony's PS4 Neo which likewise promises a leap to 4K gaming and to ensure that Apple's intentions of challenging them on the traditional video gaming console front never materializes, despite Apple's work with Electronic Arts, Crytek and Epic Games to bring console-gaming to iOS devices like the iPad and Apple TV.

Since the introduction of the iPhone in 2007, Apple slowly, methodically and single handedly destroyed the traditional Windows PC market that may take until 2017-2018, according to IDC, before the bleeding final stops. Microsoft has vowed to challenge Apple on every front going forward from a next-gen Surface smartphone on the way through to a new iMac challenger.

Earlier this month another Microsoft patent was published by the U.S. Patent & Trademark Office revealing some of their work on Xbox's next gaming controller (likely coming to Project Scorpio) and more importantly, advancing gaming on Surface tablets that could meaningfully challenge the iPad Pro on the gaming front.

Vibro-tactile haptics technology are found in a wide number of currently-available consumer electronic devices--e.g., such as tablets, smart devices, game controllers, smart phones and/or mobile phones--that provide a rumble feedback in silent mode for a phone, feedback from a fixed sensor button for a touch screen, or for improving a gaming experience by providing specific feedback on a gamepad/game controller that is correlated to what may be happening on a screen. 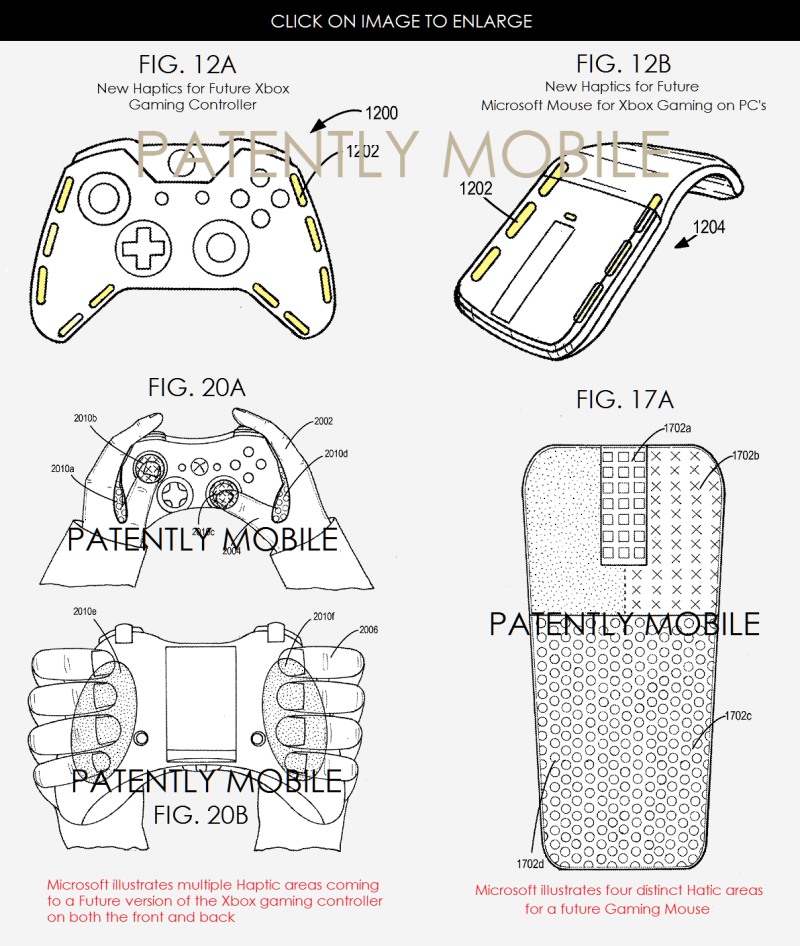 Microsoft's patent FIGS. 12A, 12B, and 13 depict the placement of haptic elements on other I/O devices (Xbox controller #1200 and PC mouse #1204 respectively). In these examples, haptic elements #1202 in the controller and in the mouse may be spaced along the border of these devices--e.g., with a similar density to a tablet/laptop (2-5 haptic elements in the distance of a user's hand length), as these objects tend to be placed in a user's open hand.

Microsoft's patent FIGS. 17A and B show a front view and a perspective view, respectively, of a mouse 1700 that has four different haptic zones (1702a, 1702b, 1702c and 1702d) that substantially partition the surface of the mouse.

Microsoft notes in their filing that Multiple haptic zone feedback may be embedded, mated and/or otherwise employed in the housing of a number of different device platforms--e.g., tablets, laptops, smart devices, mobile devices, smart phones, game controllers, remote controllers, mouse, stylus pens for smart devices, wearable devices, I/O devices and/or other devices in which a user may hold or otherwise receive a haptic response.

Each of these devices may include a housing (e.g., a form factor) that has surfaces (e.g., a front side, rear side, edges or the like) with which users can interact--for example, hold, grip, balance or the like. As mentioned, individual haptic elements that are embedded and/or mated to the surfaces on and/or in the housing of such devices--and make up such multiple haptic zones--may comprise any number of haptic technologies, e.g., such as electromagnetic motors/rumblers, Eccentric Rotating Mass (ERM) vibration motors, Linear Resonant Actuator (LRA) vibration motors and/or piezo structures.

Microsoft's patent FIG. 1A is one embodiment of an exemplary device comprising ambient multiple haptic zones. 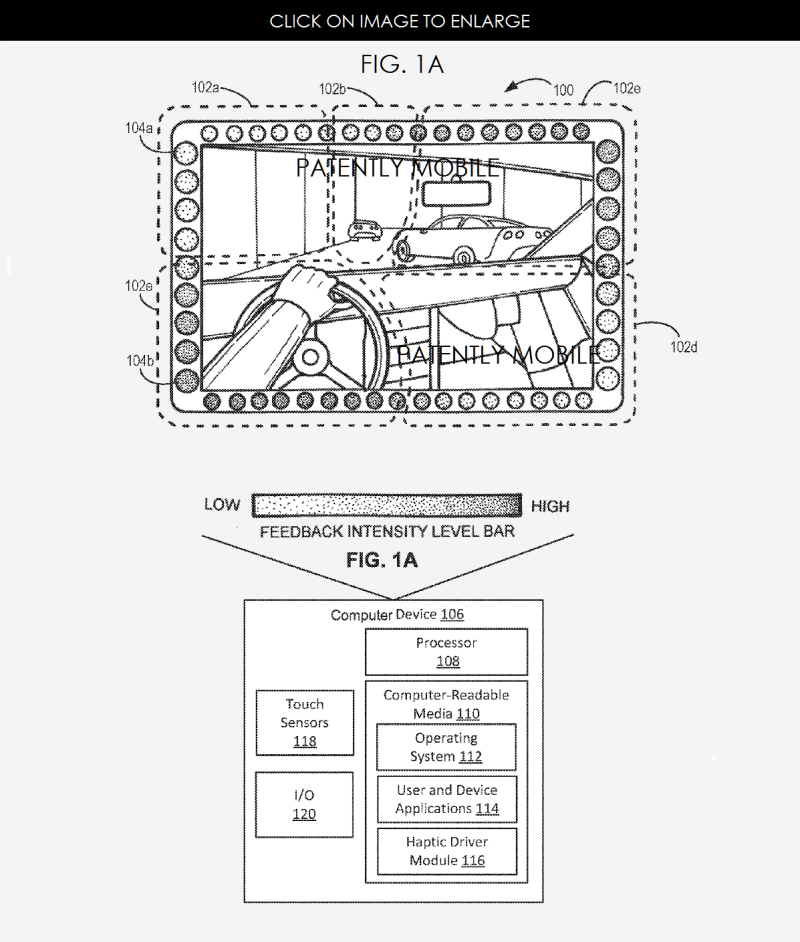 Microsoft's patent FIG. 2 illustrated below depicts yet another gaming example #200 comprising a wartime game--in which the haptic elements #104 may assume different feedback intensity levels--and/or be partitioned into zones (e.g., 202a, 202b, 202c, 202d and 202e), if commanded and/or desired by haptic driver module #116 (in FIG. 1 above). 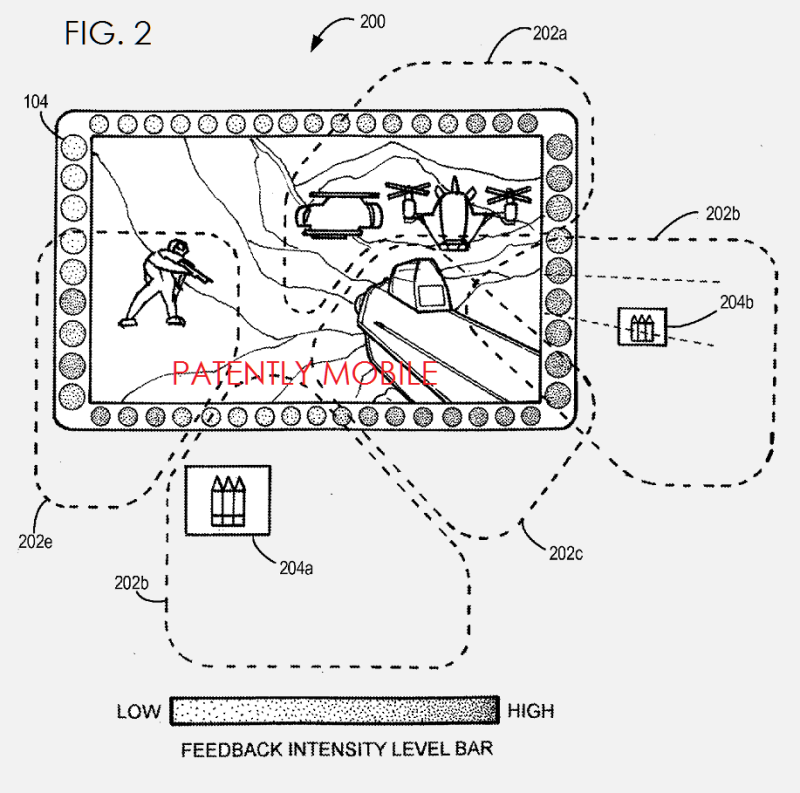 In this gaming interaction scenario (e.g., a "First Person Shooter" game), gun feedback, haptic-based radar for searching ammo (204a and/or 204b) and other game artifacts, feedback from sides for easier determining enemy position are also possible. For example, in zone #202e, the user may "feel" the presence of an enemy that is nearby with a mid-to-high haptic feedback level.

Zone #202a may interpret ships in the distance with a moderate vibration. Zone 202c may be interpreted as the user's gun environment--and may deliver a haptic response appropriate as to whether the user is currently firing the gun at the time. 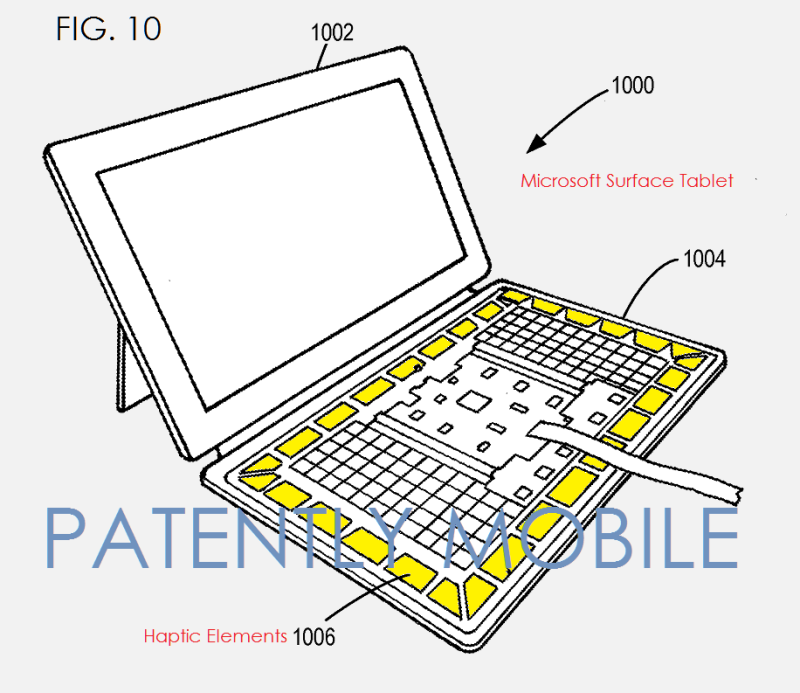 Microsoft's patent FIG. 10 illustrated above depicts another example of a tablet/laptop #1000 that may employ a keyboard 1004 that may in turn be either attached (e.g., as with a laptop) or detachable (e.g., as with a tablet). Keyboard #1004 is shown in a transparent view (i.e., with front cover removed)--in order to show that haptic elements #1006 may be attached and/or mated to the keyboard, to provide a haptic experience to the user while using the keyboard.

Haptics Added to the Surface Pen 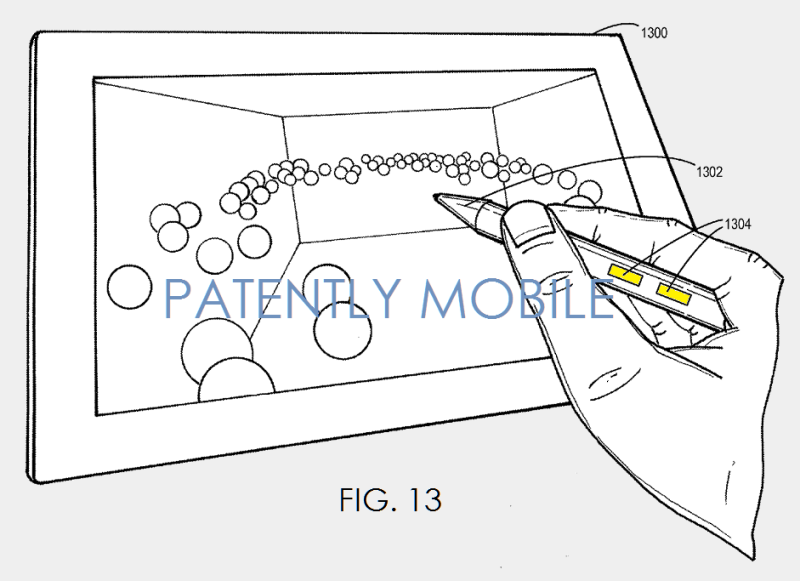 Today the Microsoft Pen has two buttons for right-click and erase. Microsoft's patent filing notes that two buttons could be added to their pen that are haptics related.

Microsoft notes that "Haptic responses may be delivered and associated with whatever image and/or video is being rendered to the user at the time. For example, in FIG. 13, if the user is able to "pop" one of the bubbles rendered on screen Surface tablet screen, then the device may command a haptic response to the user's hand via the Microsoft Surface Pen. The device may know how and in which manner the user is interacting with the device. For example, sensors (that may be co-mated with haptic elements) may inform the device that the user is holding the controller, the mouse and/or the stylus at any given time. The device may be able then to deliver the desired haptic response at the proper time to the specified I/O device.

In one aspect, a stylus with haptic feedback may be used as an accessibility mechanism. In this example, it may be desirable for a blind person who cannot see the information on the screen--to employ the stylus to provide feedback related to the information presented on the screen at that position.

When Microsoft introduced their Surface tablet with a soft keyboard in June 2012, many said that they were ahead of Apple's iPad. Technically having it on the market that was true, but Apple filed for a soft keyboard for the iPad in Q4 2011 (published in 2012). This is the case many time where Apple will patent something, only to see a competitor jump on their ideas and bring it to market before they do. It's maddening at times to see that Apple has an idea but is slow to bring it to market.

The same is true about haptics and invisible controls for future versions of the iPad. An Apple patent illustrating backside iPad controls for gaming surfaced in 2010, as noted below.

And the topic of haptics and invisible controls for the bezel of the iPad was covered in several patent applications in 2010 (one, two and three) and 2012.

So once again, Apple envisioned gaming controls and haptics long before Microsoft and other tech companies but more than likely it's going to be Microsoft who will deliver this to market first. Microsoft wants the Xbox with 4K gaming quality to run across all of their Surface line-up covering the Surface tablet, Surface Phone, Surface Book, and Surface all-in-one desktop. This will be one of Microsoft's advantages over Sony's Playstation – even though Sony is introducing PS4 Remote Play for the Mac and PC. Playing a favorite game on one device and then continuing to play on another device is where gaming is going.

Even though Microsoft's Surface Book has been plagued with problems with sleep mode, Panos Panay, Microsoft's Corporate VP for Surface always wants to pound the table as to why their hardware is better than Apple's. To get a leap on the iPad Pro, Microsoft is racing to bring Xbox game play to their entire Surface line-up including tablets. Will Apple be able to provide a counter attack by next Christmas? Only time will tell.

Though at the end of the day, one thing is for sure – Apple needs a strong competitor to keep them on their toes and push them to bring their ideas to market faster. It should have been Apple to have introduced the iPad Pro first with their Apple Pencil and soft keyboard before Surface did. They had the patents but sat on them.

Microsoft ran with it which allowed them to enter the market with a different take on tablets than Apple's leading iPad and it looked as if they were more innovative than Apple when it wasn't the case.

The more Microsoft pushes Apple, I applaud it, because it'll push Apple to have to counter good products and that's great for Apple fans. But it would sure be nice if some of Apple's advances and patent concepts would come to market a little faster to keep the completion on the ropes and to hang the naysayers.

Microsoft's latest gaming patent was filed back in June 2014. Considering that this is a patent application, the timing of such a product to market is unknown at this time – though it's likely to appear some time in 2017 and 2018.