Earlier this month the U.S. Patent and Trademark Office published a patent application from Apple revealing an invention that could one day play a part in Apple's Health Platform through HealthKit. Today Apple's Health app gives users an easy-to-read dashboard of your health and fitness data. But HealthKit is also behind new hospital systems like the one from Ochsner Health System, the largest not-for-profit academic medical center in the Gulf South which uses iPhone, iPad and Apple Watch to further its mission of innovation in healthcare.

Rather than visiting the doctor a few times a year to record their blood pressure, they can take daily or weekly readings at home. The Apple Health app aggregates all health data on each patient's iPhone. A patient can elect to feed their health information directly into Ochsner's electronic medical record system (EMR) through the Epic MyChart app for iPhone. Clinical Pharmacists at Ochsner then visualize this data on a user-friendly dashboard, contacting patients and doctors if the patient's threshold triggers an alert.

This kind of system is on the cutting edge of what Apple wants to eventually bring to market in the form of Tele-Medicine Sessions between a doctor and patient so that it could save time for both the doctor and patients, especially busy professionals that are pressed for time. This is a system that Apple has a patent for and its one that recently came to light.

Cutting to the chase, Apple's patent is about Tele-Medicine Sessions. 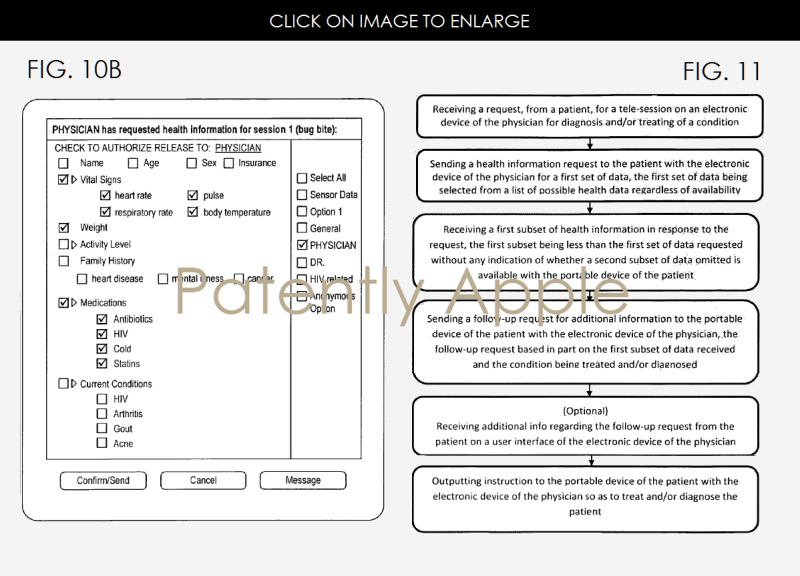 In some embodiments, the patient device may include one or more pre-sets that automatically authorize certain data to be released. For example, as shown in FIG. 10B, the patient may choose from various preset authorization options: including "Select all;" "Sensor Data;" a customized preset, "Option 1;" a category based on the specialty or practice of the physician, "General;" a preset for a particular physician or condition of the patient, or an "Anonymous" option, which automatically deselects "name/age/sex/insurance" to allow the patient to remain anonymous. 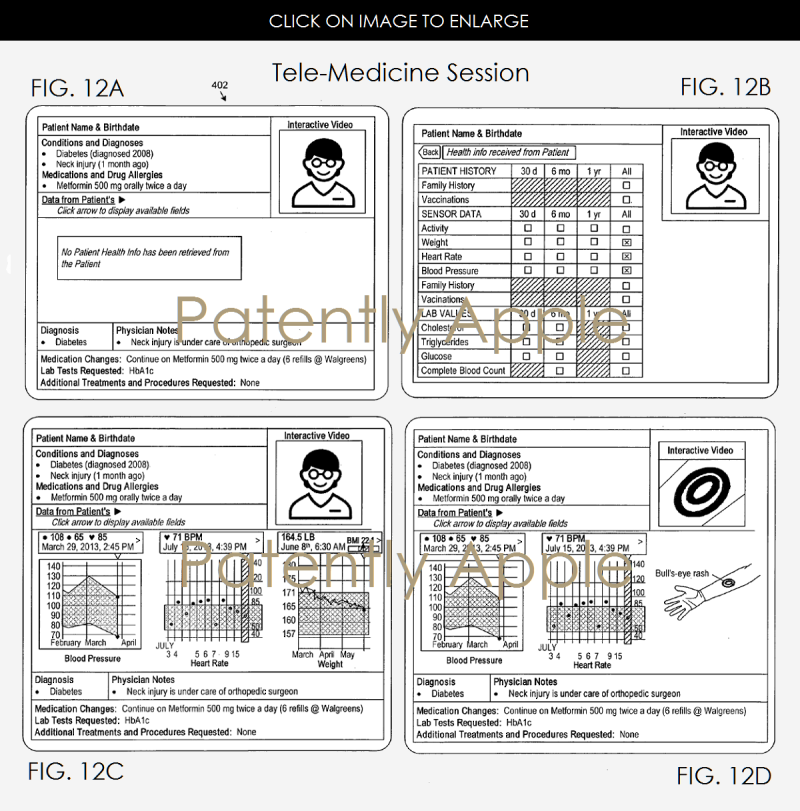 In Apple's patent FIG. 12B noted above we're able to see an option screen on the user interface that indicates possible types of health information that may be stored on or accessed with the patient's device. These options are not indicative of data that is present, but merely of possible types of data that may be present. The physician then selects the set of data to be requested. The physician may select the types of data individually, or by various categories or groupings of data, or according to pre-selected lists based on the specialty or the condition being treated and/or diagnosed. The physician then sends the information request and, in return, may receive a subset of data of the first set that was authorized by the patient, such as shown in FIG. 12C. The plurality of health data elements received from the patient may be displayed in a particular region of the user interface alongside with certain other information obtained from the physician data system for comparison. In some embodiments, the telemedicine platform allows third party applications as extensions providing semi-automated analysis to highlight relevant features and save time for both the patient and the physician.

In another aspect, results and analysis of data processed by third-party applications can be displayed side by side for easy comparison and validation. As shown in FIG. 12C, health data elements of the plurality may be processed data displaying a trend over time or averaged data, which may be received from the patient device as processed data, or alternatively, information received from the patient may be processed using one or more application on the physician device.

Apple patent application 20160210416 was filed in Q4 2015. Apple acquired this patent from Todd Whitehurst who used to work at Senseonics. His LinkedIn bio notes that Whitehurst led some R&D efforts for Apple Watch and HealthKit. He was highlighted in a 9to5Mac report back in February 2014. Interestingly Whitehurst left Apple in mid-2015 to join Google where he's now the Director of Hardware Development and Life Sciences where he's leading research and development efforts for a variety of new medical devices, including devices for diabetes management and vision care, in conjunction with strategic partners.