Last month we missed a design patent win of Apple's in the Hong Kong database. The win is Apple's second design patent for the MacBook. The first design was granted in early February and could be reviewed here. Our report also takes a look at the rumored U.S. based 'AirPods' trademark.

Unlike "patent applications," design patents published by the U.S. Patent and Trademark Office and/or any other Patent Office, don't reveal pertinent information about a particular design. All we are given is a series of simple photos and/or line-art graphics of what was actually registered, as noted below. 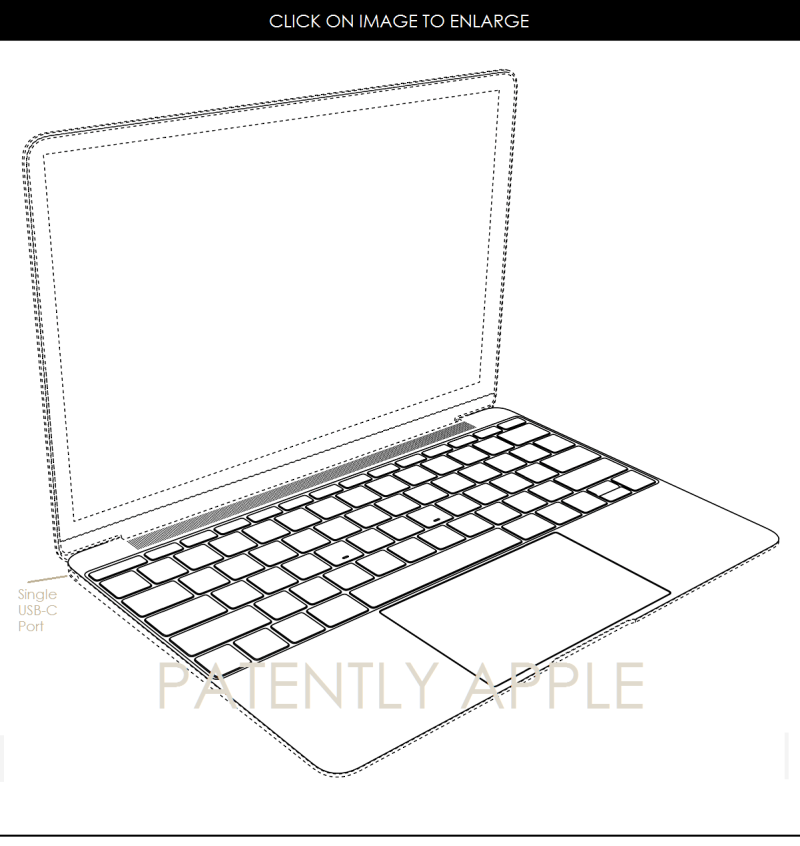 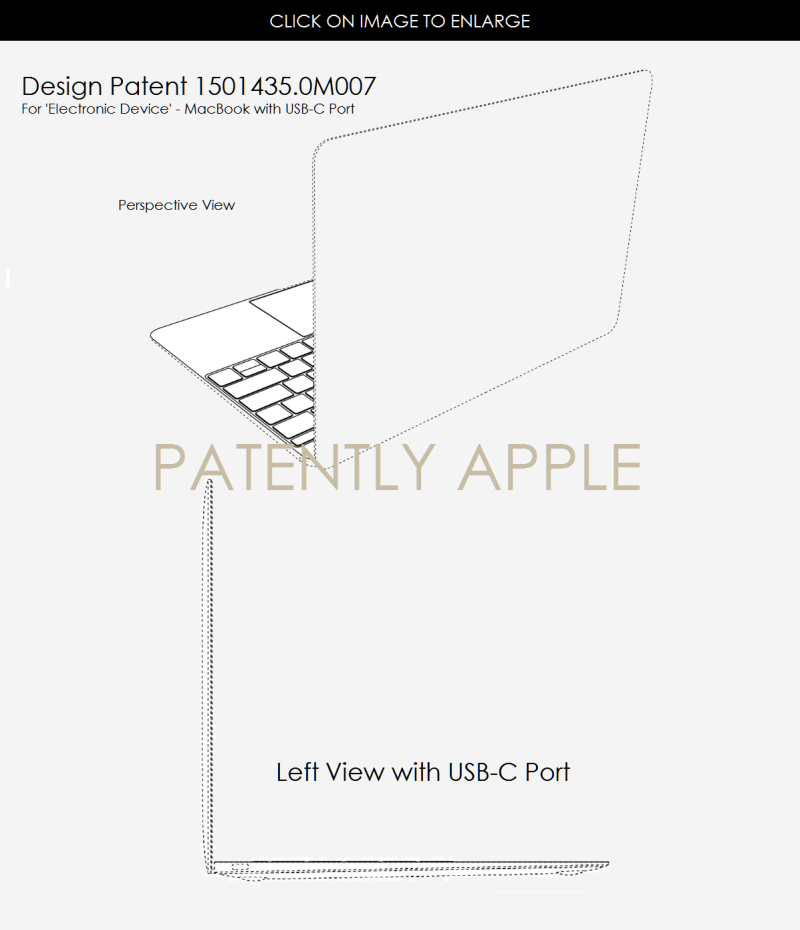 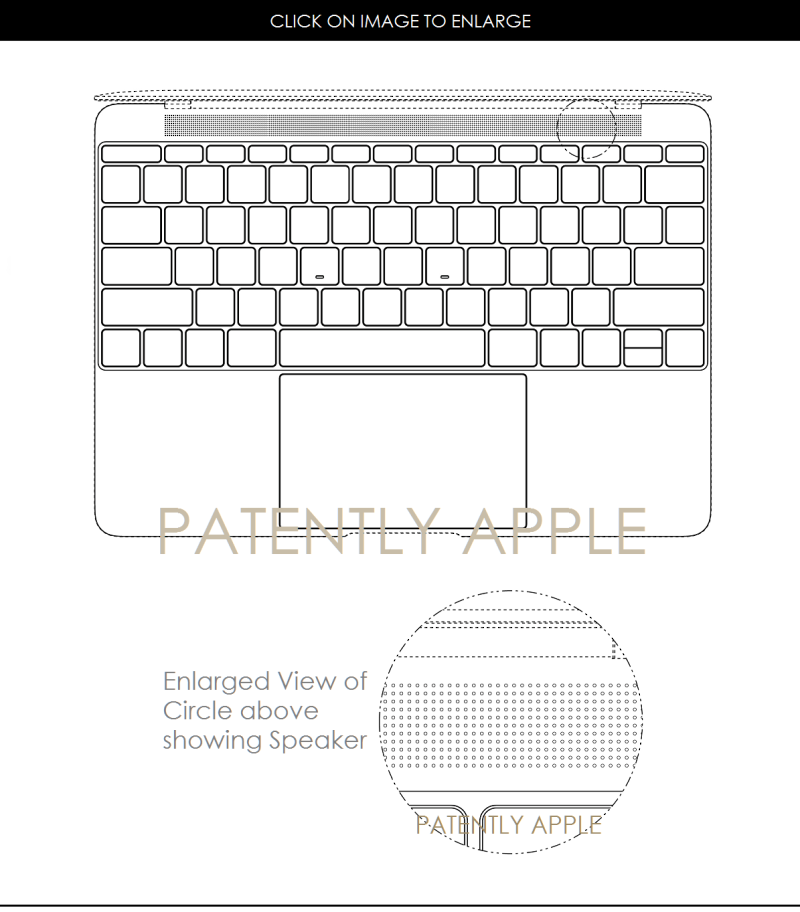 A Look at the AirPods Trademark Rumor

Yesterday we posted a video from Weibo showing the rumored 4.7" iPhone- 7 model in two colors and quickly revealed the bottom of the iPhone not having a headphone jack. Even though we didn't get to see if the jack was moved to the top of the iPhone, the lack of a traditional jack supported other rumors that Apple was likely to introduce wireless 'AirPods.'

The U.S. Patent and Trademark Office filing for 'AirPods' under the serial number 86764566 lists the attorney as Christopher Harvey on this application. 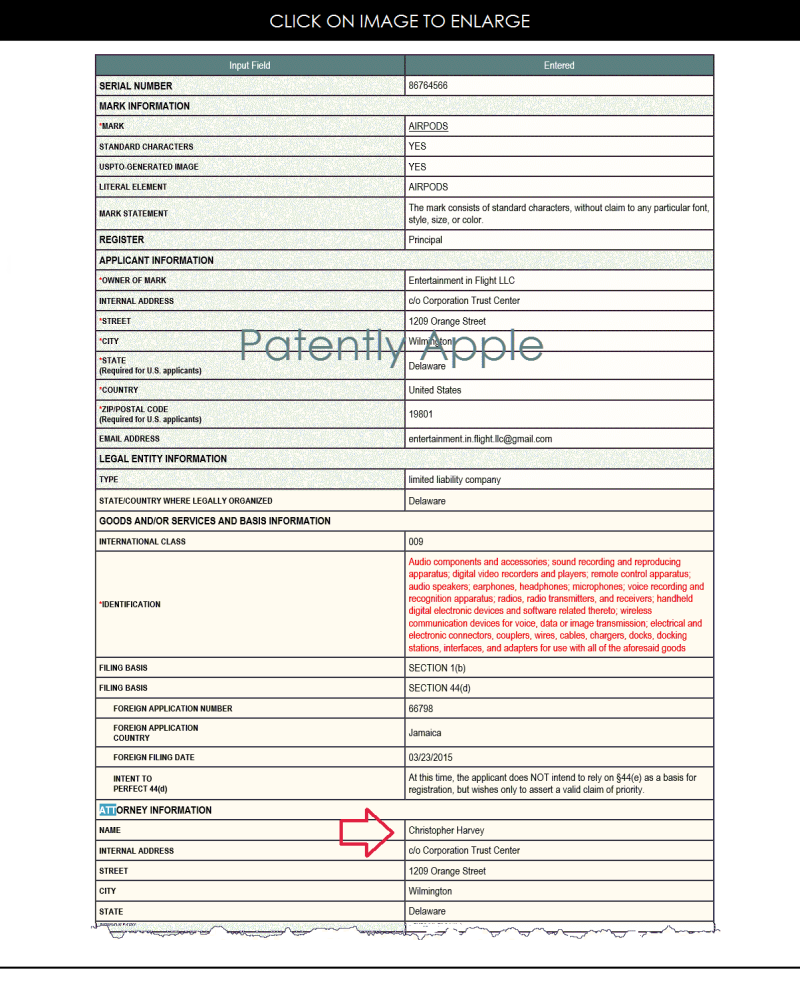 Mr. Harvey's name was also noted on the original filing in 2015 as is noted on this SCRIBD copy of the AirPods filing here. That filing shows all of the filings related to AirPods in both 2016 and 2015 – so scroll to the bottom filing for the 2015 version again with Mr. Harvey's name listed.

The attorney name Jonathan Brown is nowhere to be found the documents we're presenting and Christopher Harvey has no connection to Apple.

The rumor report also listed July 7, 2016 as the date of the trademark filing and yet there's no filing with that date found in USPTO's database noted above.

MacRumors Eric Slivka is a solid writer and perhaps he has access to some document not readily available publicly – because the serial number is definitely legitimate, it's just the attorney's name that remains in question. .

In the end, the trademark AirPods would fit Apple's iPhone product line perfectly. If no headphone jack is present on the iPhone 7, the trademark description is solid compared to the other 'Airpods' listed with USPTO covering everything from air conditioners to medical devices and automotive parts. Only one filing covered earphones and it's the one listed in the rumor report 86764566.

Has Apple hidden trademarks before under other company names? Yes they have. The only kink in the rumor is the attorney's name that is linked back to Apple. That's the evidence I was hoping to find so as to confirm the rumor and couldn't. Without that link, it's a split 50/50 chance that the rumor will eventually pan out. I know a lot of fans who want this feature, including myself, so let's hope it does come to market.

On the flip side, someone may have registered the trademark hoping to cash in on Apple buying the name from them. That's why Apple began to simplify product ID's of late with 'Apple' as the prefix, such as Apple Pencil, Apple Pay, Apple Music, Apple CarPlay, Apple Watch and so on so that they trademarks couldn't be held hostage.

So we could still get wireless EarPods but not named AirPods. With the trademark 'AirPods' having a 50/50 chance of materializing, it's up to you to choose which side you're on, because it's just too close to call.