With Samsung cranking out foldable device patents in record numbers with the clear intention of bringing their first such device in the next 18 months, LG has started to accelerate their development of similar foldable displays and devices with "commercialization of foldable Smart devices" in the next two or so years.

According to a new Korean tech report published today, "LG Display has started developing foldable displays. After establishing a task force team at the end of last year, LG Display transferred foldable display project that was being carried out by its research institute to its development department.

The report further revealed that "LG Display recently also made a technical alliance with a foreign business to commercialize its products as it signed off on a license with Canada's IGNIS Innovation regarding OLED circuit technology. Although detailed information regarding this cooperation is not known yet, IGNIS said that this cooperation is made to develop foldable displays.

Peter Monsberger, CEO of IGNIS Innovation stated during an interview with Canadian the press that "People are going to witness foldable Smartphones that can become tablets when they are spread open within couple years."

The Canadian source further noted the CEO stating that "IGNIS Innovation has worked for 16 years on technology that improves the image quality on display screens big and small. The deal with LG will see the Waterloo Company's technology used in folding smartphones.

"In a couple of years you are going to be into a foldable smartphone, so you can open it up and it will be the size of a tablet, then you can fold it back up and it fits in your pocket. We are in the midst of all that."

The licensing agreement gives LG Display nonexclusive access to the circuit technology developed by Ignis that enhances the images displayed by organic light emitting diodes — or OLEDs. That sector of the display industry will to take off during the next few years because of Apple.

Apple is expected to use organic light emitting diodes in all of its smartphones beginning in 2018. By 2020, some analysts estimate the world market for organic light diodes will be worth US$20 billion. "So the entire industry is scampering," Monsberger said.

The Canadian report further noted that "Ignis developed circuits that made huge improvements in the images produced with organic diodes. But there was a huge technical challenge to be solved — screens made with organic diodes were not lasting 50,000 hours, the standard expected by consumers.

At an industry conference in San Francisco earlier this year, it was announced that the best solution to this problem was a combination hardware-software innovation called 'external compensation.'

"That's our specialty, and we've got over 350 patents worldwide," Monsberger says. The display industry had a problem — it could copy Ignis' circuit technology and wait for the Waterloo company to sue or it could negotiate licence agreements.

"The first one to come to the table was LG Display," Monsberger says. "At the end of the day we are extremely excited."

While Apple doesn't have many flexible display patents on record, you can find a number of them in our "Flexible Display" archives here, which includes a few interesting ones like this one and this one that are noted below with patent figures. 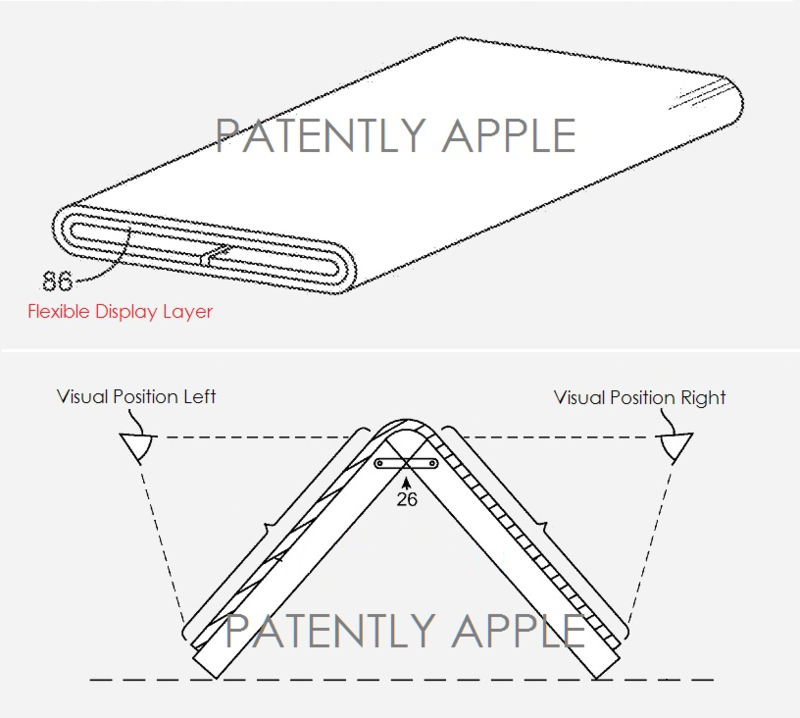 According to new IHS studies recently published, foldable displays are expected to comprise more than 51% of total display shipments in 2020.

Whether Apple will use their own home-grown technology for foldable displays or license it directly from IGNIS or indirectly through LG is unknown at this time. Without a doubt the trend to thinner displays and smartphones will eventually lead to designs with foldable capabilities. It's definitely where the industry is going and Apple is likely to stay on top of any trend that has potential of being the next killer form factor.