Apple Once thought they cracked the TV Market, but just Keep Spinning their Wheels in Vain 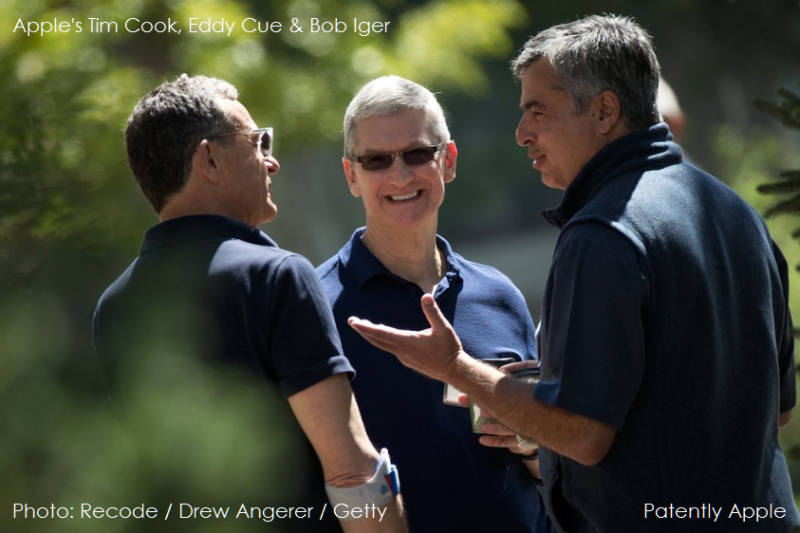 In January Patently Apple posted a report titled "Apple's Eddy Cue is on a Mission to Win Original TV Shows for Future Apple TV Service Bundle" wherein we noted that Apple was still struggling to line up networks and cable channels for its long-delayed 'skinny bundle' offering of a lower-priced video service. The Street reported at the time that Apple was trying a tack by talking directly with TV producers and Hollywood studios about investing in TV shows that could be offered exclusively to its iTunes customers. Apple's conversations with Hollywood executives were led by Eddy Cue, the company's senior vice-president of Internet sales and software who is the company's chief entertainment architect. So how is that going six months later? Well, according to the Wall Street Journal, not good at all.

Earlier this month Eddy Cue was photographed along with Tim Cook and the head of Disney Bob Iger at a billionaire's gathering in Sun Valley. All seemed jovial for the cameras of course. But behind the scenes, it's apparently a different matter.

The Wall Street Journal (WSJ) reports that Apple Inc. executives had every reason for optimism when they approached Walt Disney back in early 2015 to join the streaming television service Apple planned to launch. Disney Chief Executive Robert Iger is an Apple director and had said he was keen to strike a deal.

Disney, which owns channels such as ESPN and ABC, was stunned, though, when Apple executive Eddy Cue made demands that would have upended decades of cable-industry and Hollywood practices, people familiar with the discussions say.

In particular, Apple wanted to freeze for several years the monthly rate per viewer it would pay to license Disney channels. TV channels usually get annual rate increases and rely on them to fuel profit growth.

The WSJ report recounts several meetings that Eddy Cue had with all of the big networks and one former Time Warner Cable executive reportedly said "Do you have any idea how this industry works?

Apple has said doing new things requires changes that often are unsettling – and apparently that might have worked for Apple when winning over music industry executives  for iTunes but it's not working with the cable companies.

In the end, Apple TV's desire to come up with a winning Apple TV strategy is spinning its wheels year in and year out. It's almost an ongoing joke at this point in time. Apple should make a few head turning deals in Hollywood just to at least get on the map, just to get in the game, because at the moment they're looking bad by continually striking out and being left at the alter by the cable guys.

The two industries just don't mix well and Apple should get angry and be the T-Mobile of TV and break all the rules set by the cable guys. Ruffle some feathers, upset the Apple cart and hurt these guys ratings. Either get in or get out, but being in between is really getting old and boring. For more on this story see the full Wall Street Journal report here.