Today, the U.S. Patent and Trademark Office published a patent application from Apple that reveals their quiet and ongoing work on autostereoscopic displays, better known as 3D displays. The last three such Apple patents that we've covered on this topic could be viewed here: one, two and three. Beyond that, Apple has been working on a VR headset for some time now with one showing how you'd be able to choose your viewing angle or seat for an event.

Today's newly published patent application surfaced showing a single inventor by the name of Jean-Jacques Drolet titled "Fine-Course Autostereoscopic Display." Drolet has a number of patents to his credit with some of them having no connection to Apple – or are simply not yet assigned to Apple. His linkedIn background reveals that he worked at Holoplex where he worked on a project in collaboration with Sony on an optoelectronic neural network that experimented on an optical-correlator-based gesture recognition system.

Holoplex has been a pioneer in VR and VR experiences for VR headsets, tablets, TV's and browsers. Drolet studied at the California Institute of Technology where he racked up some experience being a part of a few cutting edge inventions/patents. The first was granted in 1996 and the second granted in 1999 with both sharing the same title of "Compact architecture for holographic systems."

In another example, it would appear that the display could be part of a TV or Mac, as Apple further notes that "the viewer may not always remain directly in front of the display. For example, a viewer may change position with respect to the display in order to "look around" objects being displayed in three dimensions.

Such a description would strongly support another Apple patent regarding what's actually on the display, such as a 3D GUI as noted below. 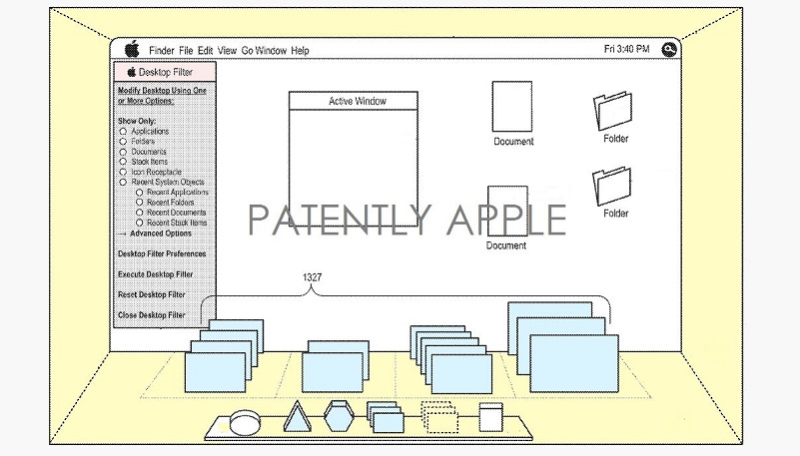 Apple's latest patent filing supports this in FIG. 8 noted below in how it would execute on such a GUI.

3D interfaces don't have to require special glasses as is illustrated in this 2009 demo on an iPhone.

The list of input-output devices #12 also supports the view that this invention is primarily being aimed at Macs as they note that the device would support buttons, joysticks, scrolling wheels, touch pads, key pads, keyboards, microphones, speakers, tone generators, vibrators, cameras such as camera #20, sensors such as accelerometer #18 or other sensors that can detect the orientation of the device relative to the Earth and/or relative to a user, light-emitting diodes and other status indicators, data ports, etc. 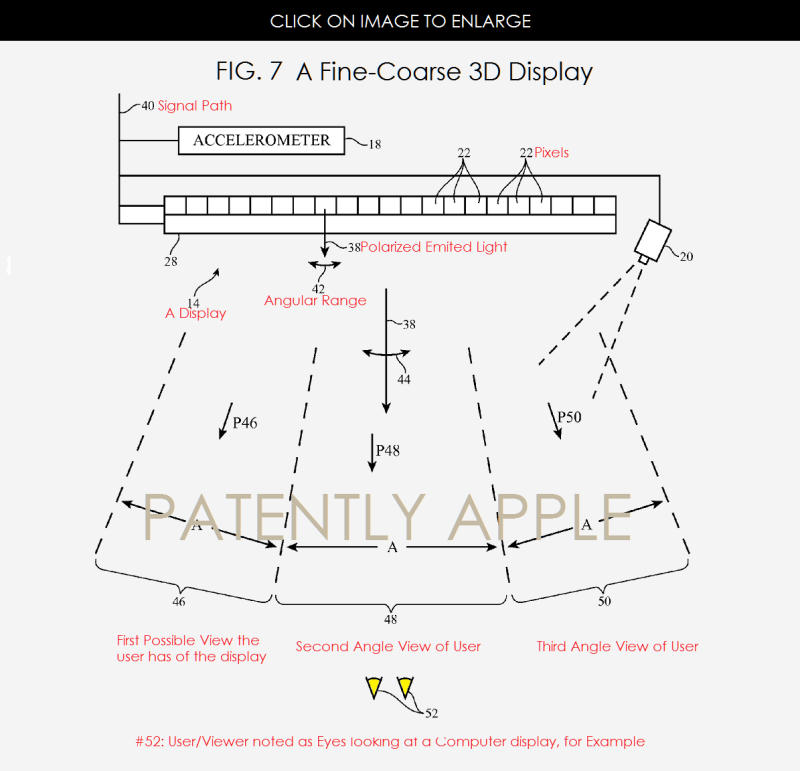 For more details about this invention, see Apple's patent application 20160212413 which was originally filed in Q1 2015. Considering that this is a patent application, the timing of such a product to market is unknown at this time.

Other 3D GUI patents include: One, two, three and four (for iPhone). Other 3D related patents could be found in our archives here which has many from Apple's acquisition of PrimeSense.

If done right, a 3D interface could be very cool and the next frontier for computing that just might have the power to revive the PC industry.