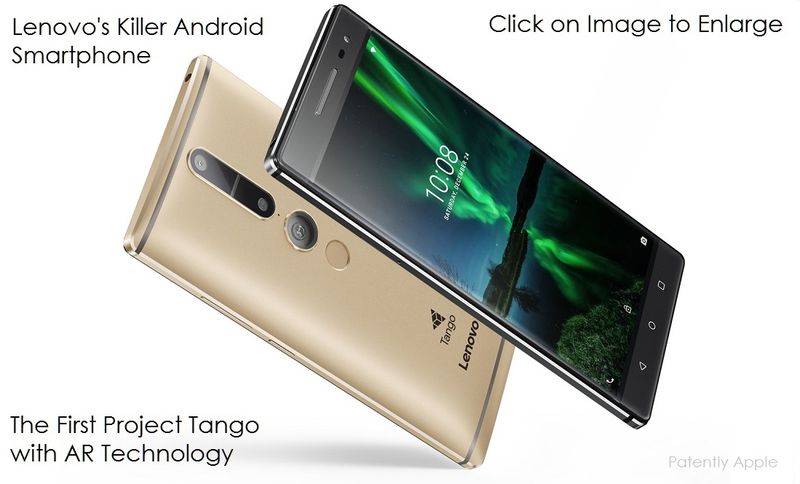 Google's smartphone concept called Project Tango has taken forever to get off the ground, primarily due to Apple acquiring PrimeSense that was to deliver a key technology for their 3D camera. After a long delay Lenovo will be the first to deliver a Project Tango based smartphone this September, likely prior to the release of Apple's iPhone 7.

Apple's iPhone 7 Plus will be introducing a dual lens camera while Lenovo will be releasing their new Phab 2 Pro smartphone that will be sporting a 3-camera system for rendering 3D images. A 3D camera is also likely to appear in a future Lenovo tablet, as one of the photos in their literature shows a tablet with what appears to be an Intel RealSense camera system on the tablet's backside.

The second high-end feature that this smartphone will be promoting is Augmented Reality.

One of Google's Project Tango Photos noted above illustrates the Lenovo Phab 2 Pro being used in a Dinosaur museum. As shown, the guest aims their smartphone at one of the exhibits and information about the object automatically pops-up on the display.

This technology was covered in a Patently Mobile report back in August 2014 and again a day later in a special report titled "Apple and Google Headed for an Indoor Location Services War." The back of the Lenovo smartphone has a motion-tracking sensor, a fish-eye camera, a depth sensor.

Google's Indoor mapping technology is another feature that the new Lenovo phone will be introducing which makes you wonder if Apple will be introducing this feature at their World Wide Developer Conference on Monday and more importantly to the iPhone 7 this September. Apple has been working on this for years (one and two) in addition to acquiring a number of companies to expedite this project which began with WiFiSLAM.

The applications for indoor mapping will extend to large malls, convention centers and even assist the fire department which we pointed out in this report. Project Tango devices will also be able to guide a user to the right platform in a subway station using contextual and positional awareness. And the one I like is that it will be able to guide you to a product that you're look for in a large department store. With the lack of sales staff these days, wondering a store looking for a particular department or product is a really frustrating at times and time wasting experience.

If you happen to be a real phablet fan like I am, then the Lenovo Phab 2 Plus will launch with an amazing 6.4" full high-definition display. The smartphone's screen displays images at a 2560 x 1440 pixel resolution.

Other specifications include the handset only weighing 259 grams and measuring 10.7-millimeters at its thickest point. It has dual nano-SIM slots, 64GB of storage, 4GB of memory, and a micro-SD slot for up to 128GB of extra storage. The handset has a 4050 milliamp-hour battery that can provide 18 hours of talk time and 13 days of standby time. All of this will go for US$499.

While price will never deter a true Apple fan from switching to an Android smartphone, those buying their first smartphone or those on a tighter budget will certainly be tempted to check out the coming Lenovo Phab 2 Pro or even the Samsung Galaxy C7.

The smartphone wars are really going to be heating up this fall and it'll be interesting to see if Apple will be bringing their indoor mapping to the iPhone 7 and whether they'll ease up on pricing a little – as is appears it's going to be a very brutal holiday season fighting for every eligible customer in a slowing market.

You could learn more about the Lenovo Phab 2 Pro here and Google's Project Tango here.