Home Archives Contact Us Subscribe Twitter MeWe Facebook Patently Mobile
Apple, Microsoft and Google are ready to Battle it out with competing 3D Depth Cameras
Democrats are landing a Few Big Political Hits against Apple and their CEO Tim Cook of Late

Forbes Misguided View is that Apple has Missed the AI Revolution 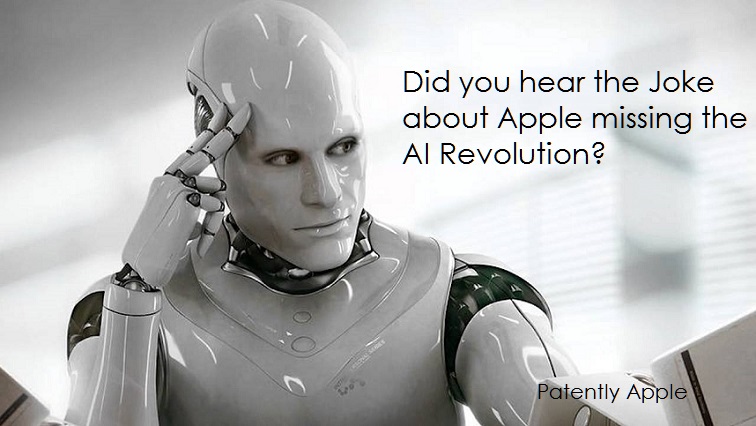 Jon Markman, a contributor to Forbes has posted an article today titled "Apple's Problems Are Worse Than You Think." Markman writes that "Apple became a consumer electronics titan because it correctly saw touch as the next computing paradigm. In tandem with Google, it won. Yet, times change. By most accounts the next paradigm shift is artificial intelligence and voice. Apple is not built to compete in that new paradigm. See you on the other side. GOOG and AMZN remain among the best bets for the AI generation, with Facebook not far behind." Wow, what an insane view writing Apple off before the revolution has even arrived. I think Microsoft would also disagree with Markman's view as well.

Apple not only saw multitouch as next paradigm, it created a business that quickly conquered mobile giants like Nokia and Motorola – perhaps anhilated them would be more precise. In July 2015, Apple made 92% of the smartphone industry profit even though it wasn't the leading brand by volume any longer. They created the app store concept and even today they make twice as much profit than Google Play which has Android on about 85% of the mobile devices in the world.

So what has Google, Facebook and Amazon actually created with their leading AI thus far that actually matters? I'm still waiting? What's that? Nothing. Huh, so what have they won and why is Apple already out of the race Mr. Markman? Yes, it's your theory. Yes, many may agree with it I'm sure, but until these companies actually make something of real value compared to what Apple has done with the mobile revolution, you're simply talking in the wind.

It was Apple who saw the potential of AI with Siri before the others ever did. Yes, perhaps Apple had temporarily fallen asleep at the wheel, but have since acquired Vocal IQ who once called Siri a toy compared to their technology. This next-gen AI technology will no doubt be able to go toe to toe with Google Amazon and others. Vocal IQ's technology is extensive by covering an auto-pilot driver assistance, home automation and wearables.

The Financial Times reported last October that "Vocal IQ uses machine learning to build virtual assistants that try to recreate the type of talking computers that appear in science-fiction films such as Samantha in Her or Jarvis in Iron Man."

There's no use belaboring the point, but Mr. Markman's view of Apple missing the AI Revolution is not only myopic, but almost child-like in its favoritism for all companies but Apple. The AI revolution has not taken off to any financial position worth a damn at the moment and until it does, it's just a negative forecast against Apple like the one that eventually cost Adnaan Ahmad his job with the Berenberg bank. For now, Markman's view is nothing more than annoying fluff artificially puffing up Apple's competition.

Update June 29, 2016: Forbes has yanked Mr. Markman's article. The article can now be found on Markman Capital's site under the title: Will Apple Go by the way of Blackberry?  - Thanks to reader 'Jeffters' for sending in this update. Cheers!