Today, the U.S. Patent and Trademark Office published a pair of Apple Watch specific patent applications. The first covers the Apple Watch's Digital Crown and learn that new functionality buttons could be introduced in future versions of the watch. In the second patent we learn about how location aware apps work in Apple Watch. More importantly we learn that Apple may introduce one or two cameras in a future version of the watch, with one specifically designed to be the ultimate selfie camera positioned right on the face of the watch. 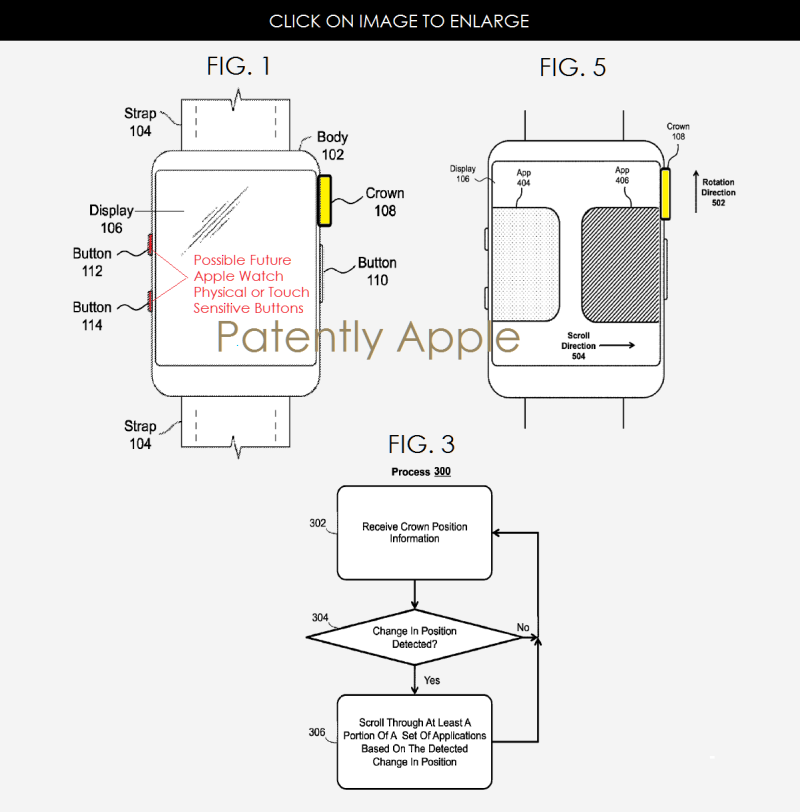 Apple notes in FIG. 1 that the crown #108 can be touch-sensitive, for example, using capacitive touch technologies that can detect whether a user is touching the crown. Moreover, the crown 108 further be rocked in one or more directions or translated along a track along an edge or at least partially around a perimeter of body #102.

In some examples, more than one crown can be used. The visual appearance of the crown can, but need not, resemble crowns of conventional watches. Buttons 110, 112, and 114, if included, can each be a physical or a touch-sensitive button. That is, the buttons may be, for example, physical buttons or capacitive buttons.

Apple also noted that the body of the Apple Watch can include a bezel and that the bezel may have predetermined regions that act as buttons.

For techies who want to understand the methodology behind the Apple Watch's digital crown in greater detail should review patent application 20160170598 here. Jonathan Ive and Kevin Lynch are two of the listed inventors of this invention.

Apple notes that a user's mobile device is not always readily accessible. For instance, when an iPhone receives a phone call, the user's iPhone may be in their pocket or a purse/bag. The user may also be walking, driving, carrying something, or involved in other activity that makes it inconvenient or impossible for the user to reach into their bag or pocket to find their device.

Apple's invention relates to wearable devices that, in cooperation with a mobile host device (e.g., a mobile phone, smart phone, tablet computer, or the like), can provide location-specific information to a user.

Apple further notes that the Apple Watch can present at least some of the received information content at one of its interfaces. For example, the Apple Watch can display a user-readable representation of at least a portion of the information content, or it can display a machine-readable representation such as a bar code, QR code or the like.

As another example, the Apple Watch has a near-field communication NFC) interface that can detect that an NFC terminal is in proximity and transmit an NFC signal representing at least a portion of the information content to the NFC terminal. Today Apple Watch with Apple Pay works this way. 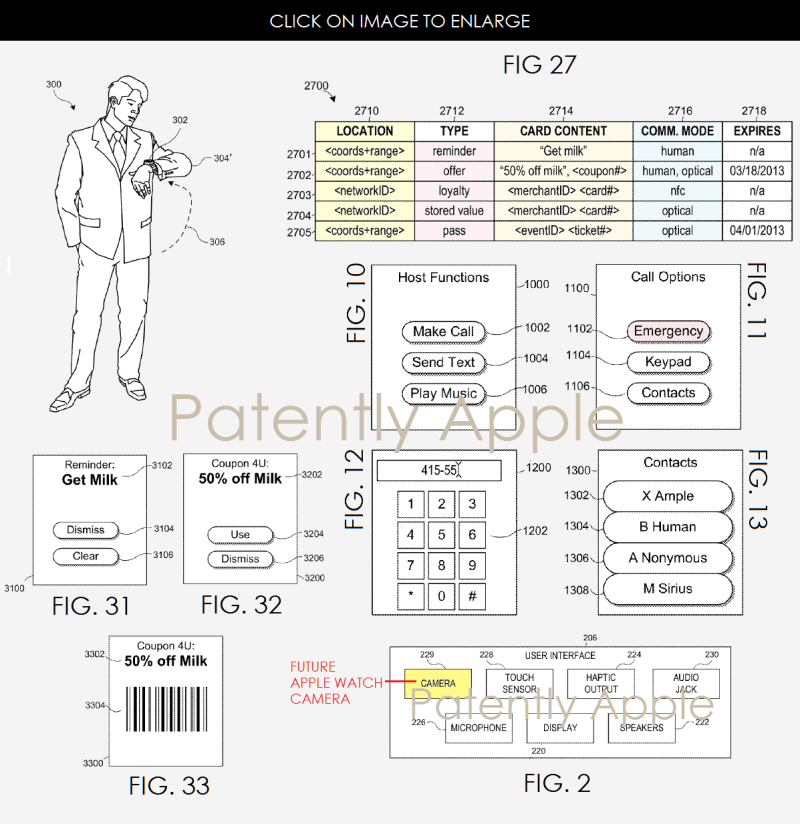 One of the little surprises in this patent is the admission that a future iteration of the Apple Watch will feature a camera. This is noted in the graphic FIG. 2 noted above showing us an overview of "the user interface."

More specifically the patent notes that camera #229 can include, e.g., a compact digital camera that includes an image sensor such as a CMOS sensor and optical components (e.g. lenses) arranged to focus an image onto the image sensor, along with control logic operable to use the imaging components to capture and store still and/or video images.

Depending on implementation, the optical components can provide fixed focal distance or variable focal distance; in the latter case, autofocus can be provided. In some embodiments, the camera can be disposed along an edge of the Apple Watch, the top edge, and oriented to allow a user to capture images of nearby objects in the environment such as a bar code or QR code.

In other embodiments, Apple notes that "the camera can be disposed on the front surface of Apple Watch face to capture images of the user" – being the ultimate selfie camera. Zero, one, or more cameras can be provided, depending on implementation.

Apple's patent application 20160174025 is an in-depth patent filing about many aspects of Apple Watch. Techies wanting to dig deeper into this invention could do so by clicking here.