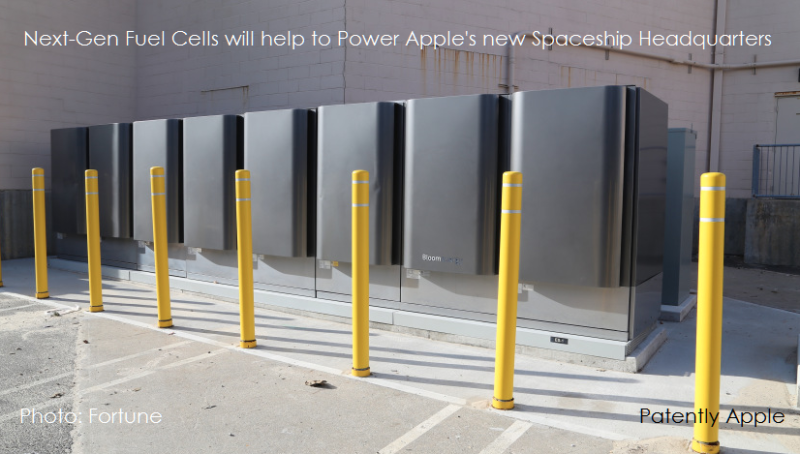 According to a new report today, Apple's new massive campus, dubbed the Spaceship will be opening its doors next year and in-part will be powered by rows of big silver boxes containing fuel cells like those noted in our cover graphic. The fuel cells generate energy through a chemical reaction. A company by the name of Bloom Energy is behind Apple's 4 megawatt project.

According to a new Fortune article, "Fuel cells produce energy by running fuel like natural gas or methane, and oxygen across rows of reactive materials. The process creates a chemical reaction that generates electricity.

The excitement around fuel cells is that they can create electricity directly next to the buildings where it's needed. That is in stark contrast to how energy has traditionally been produced far away at a coal or gas plant and then delivered long distances over power lines."

The report further notes that "Apple, after installing early versions of Bloom's fuel cells at its data center in North Carolina several years ago, is now using Bloom Energy's more efficient fuel cells at its soon-to-open space age campus. The new project is smaller—less than half the size of the one in North Carolina—but it will help Apple create a microgrid, and run on local power if it disconnects from the greater power grid.

According to Fortune, "When Apple's Campus 2 switches on its power sources next year, Bloom's fuel cells will play an important role to help Apple create a "microgrid," enabling Apple to disconnect from the greater power grid when needed. At the same time, solar panels and batteries will play an even bigger role than fuel cells for Apple's Campus 2 microgrid. For more on this, read the full Fortune report here

Earlier this month we noted that Apple had quietly created an energy Subsidiary called 'Apple Energy.' Whether Apple has any interest in Bloom Energy beyond using their technology in their new campus power microgrid is unknown at this time.