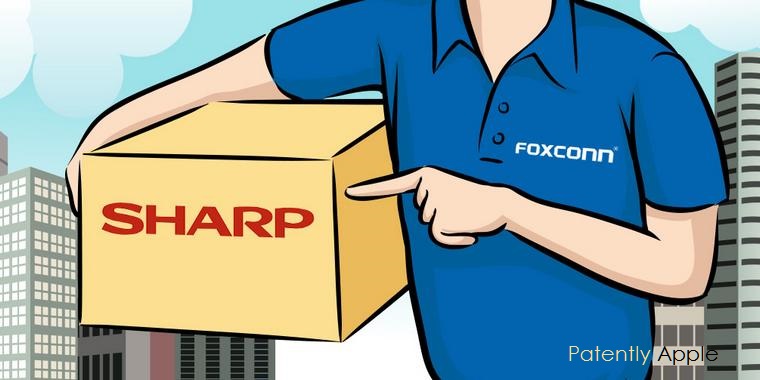 In April Patently Apple posted a report titled "Foxconn-Sharp could Enter Apple's OLED Display Supply Chain in 2020." That was a forecast by Yasuo Nakane, an analyst at Mizuho Securities who was quoted in a WSJ report stating that "Even if everything goes well, a realistic timeline for Foxconn-Sharp to start supplying OLED displays would be 2020." But apparently Foxconn's Chairman Terry Guo has a much more aggressive road map that could put Sharp in the OLED game by as earlier as next year.

A new Korean report today claims that "Sharp Corp. of Japan will start producing OLED panels used in TVs and smartphones beginning next year. This will be a challenge to the incumbents like Samsung Electronics and LG Electronics that are currently dominating the global OLED market.

According to the Nikkei Asian Review on June 23, Guo Tai-ming, chairman of Foxconn Technology Group, said on the previous day in a press conference held in Taipei, "Before 2018 we would have been ready to supply OLED panels to our customers."

The Nikkei Asian Review said Mr. Guo didn't make clear whether his company would supply OLED panels to Apple but it is highly likely that the panels would be used for Apple iPhone's screens.

Earlier, Sharp said it would spend 200 billion yen (US$1.9 billion) in building new OLED capacities. Currently only Samsung and LG run OLED production lines that can produce the panels in large quantities.

A second source on this is Barron's Asia. They reported late on Wednesday that Sharp Corp. soared 7.2% in Tokyo after new parent Hon Hai Precision Technology said at its shareholder meeting on Tuesday that it would shut down inefficient plants and bring some of Sharp's patents to market faster. The more interesting news from the meeting however is that Sharp will be ready to ship OLED next year, sparking speculation that Foxconn may help Sharp win Apple's display business.

Foxconn chairman Terry Gou stated that "Sharp has lots of technology but it isn't able to market it. Turning patents to technology, then turning technology to products, that's what we are good at."

Market watchers are now speculating whether Sharp will supply OLED screens to Apple, although "Gou did not say whether Apple Inc. will use Sharp's new panels next year," reported the Nikkei.

Barron's Asia further noted that "This speculation is not entirely without merits. Apple is widely expected to adopt OLED screens for its iPhones next year. Samsung Electronics is rumored to be the major supplier, but since Foxconn has a long-held close relationship with Apple, will Gou convince Tim Cook to use Sharp's OLED too?"