Apple, Microsoft and Google are ready to Battle it out with competing 3D Depth Cameras

Apple has been granted a series of 3D depth camera patents since May (one, two, three and four) that could work with future Macs and Apple TV to detect in-air gestures to control an interface, support virtual keyboards and be a part of a possible future facial recognition system very much like Windows Hello that works today with Intel's RealSense camera. Both PC's and Macs are likely to take advantage of this technology over the next few years. Windows got the leap on Apple with facial recognition and a new 3D depth camera patent that was granted to Microsoft this week illustrates their desire to advance this technology over the next few years.

Microsoft notes in their granted patent that "Knowledge of the depth of an element is becoming more important in areas such as gaming, three dimensional (3D) scanning and fabrication, augmented reality and robotics, with particular importance in natural users interfaces. Specifically, the ability to reason about the 3D geometry of a scene makes the sensing of whole bodies, hands, and faces more tractable allowing these modalities to be leveraged for high degree-of freedom input."

Apple was granted a patent yesterday that covers 3D depth using an infrared camera. Microsoft's patent points to infrared being a part of their invention. Microsoft states that their invention covers "systems and methods for obtaining depth information for a scene using a simple infrared (IR) camera. The system implements machine learning to correlate the intensity of an image element and its three-dimensional (3D) depth. The IR camera may be a specialized IR camera or may be a modified conventional, monocular camera. Such a system allows depth information to be obtained in a very cost-effective and efficient manner allowing it to be implemented in low cost and low power devices such as mobile phones," as well as desktops. 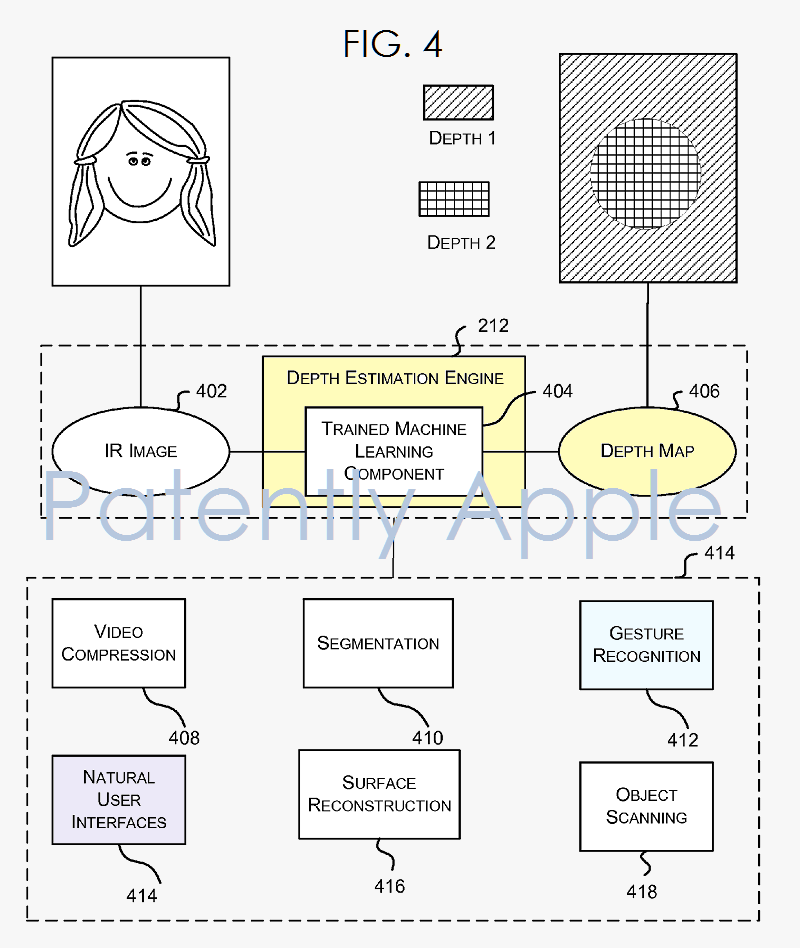 Microsoft's patent FIG. 4 noted above is a schematic diagram of their proposed depth estimation engine. The key to Microsoft's patent is building in a machine learning component to their invention as noted in paten FIG. 4 above under patent point #404. This is the key component that they've protected in their patent claims that you find in granted patent 9,380,224 here.

With Apple getting well ahead of Microsoft on mobile with the iPhone and iPad, Microsoft has been battling back with little success with their Surface line of tablets and their mobile phone which has been a train wreck with Nokia. Microsoft is likely to introduce a Surface smartphone this year to challenge the iPhone or at least attempt to challenge the iPhone and their patent today shows us that they want to advance the PC to pull ahead of the Mac with a depth camera that could add a series of new features.

So the battle is on as to who could bring this to market first and with features that their respective fan bases could get excited about. With so much emphasis being placed on mobile devices over the last decade, it's been forever and a day since anything exciting has come to the PC.

So Apple's acquisition of PrimeSense has been quite the defensive move. In fact one of the apps that Apple could be bringing to a future iSight camera with PrimeSense 3D depth technology is an advanced 3D avatar app called Faceshift. Faceshift was being designed to work with Intel's RealSense camera, as noted in a video in a report that we posted in November. But now with Apple making another strategic acquisition, it will likely block Window vendors from using this one-time Intel application for their RealSense camera.

Obviously Microsoft has been working with Intel's RealSense camera with Windows 10 and so it's time for Apple to finally deliver something on this front. It's great that they've foiled others from bringing new features to market on both smartphones and PCs, but now it's time for Apple to capitalize on this advanced technology that they've been sitting on for years. Will this be the year that Apple delivers? I think it is – but only time will tell.