Today, the U.S. Patent and Trademark Office published a patent application from Apple that reveals their work on conformable, wearable displays. The inventors on this patent were LuxVue engineers. Apple acquired LuxVue in May 2014. This patent was filed months after the acquisition. Apple inherited 21 LuxVue patents. Venture Capitalist John Doer of KPCB is on record as describing LuxVue's technology as a "technical breakthrough in displays." Today's patent covers conformable displays that could be applied to clothing or devices such as bracelets or Apple Watch – which we touched on in April regarding watch band smart links that could add new functionality to Apple Watch, and specifically an additional display. The technology is based on micro-LED displays which are also known to of benefit to displays used in future VR headsets.

According to Apple, flexible display technology can potentially be used in a variety of electronic devices such as rollable displays, irregularly shaped displays, and wearable displays. The flexibility of the electronic device is at least partially limited by the substrate on which the display is formed. Several flexible displays have been developed using thin glass or plastic as a flexible substrate onto which low-temperature polycrystalline silicon thin-film transistors (TFTs) are formed. 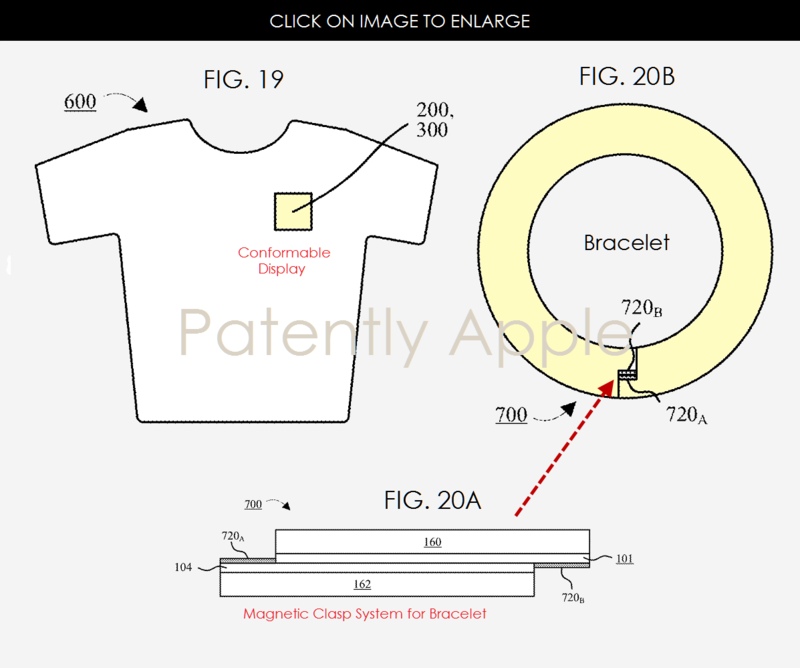 Conformable electronic packages that are integrated into wearable flexible products provide consumers and product designers with the ability to change designs, such as the logo displayed and color schemes.

Embodiments also include flexible surfaces that are a product packaging materials, such as a polymeric shrink wrapping material formed around a product. As such, manufacturers are able to update pricing, branding, or promotional materials displayed on the package without expensive repackaging costs.

In Apple's patent FIGS. 20A and 20B we're able to see a schematic cross-sectional side view of a conformable electronic package that may be formed into a bracelet #700. As shown in the cross-sectional side views in FIG. 20A, magnets 720.sub.A and 720.sub.B may be formed along ledges of the package. By way of example, the ledges may be formed with a suitable etching process, such as plasma etching. In an embodiment, the magnets may be neodymium magnets. The conformable electronic package may then be rolled such that the two magnets contact each other and clasp the bracelet together as illustrated in FIG. 20B.

The conformable display system is based on a micro LED active matrix display which utilizes the performance, efficiency, and reliability of inorganic semiconductor-based LEDs for emitting light. Furthermore, a micro LED active matrix display panel enables a display panel to achieve high resolutions, pixel densities, and subpixel densities due to the small size of the micro LEDs and micro controller chips.

In some embodiments, the high resolutions, pixel densities, and subpixel densities are achieved due to the small size of the micro LEDs and micro controller chips.

To review the technical aspects of this invention, see Apple's patent application 20160163765 was originally filed in Q4 2014. Considering that this is a patent application, the timing of such a product to market is unknown at this time.