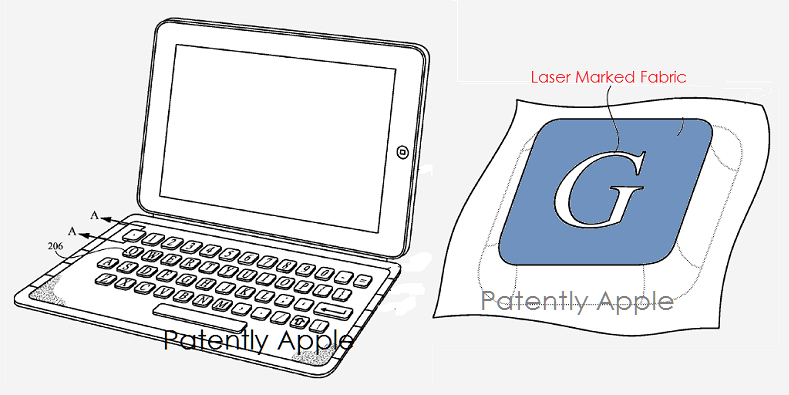 Today, the U.S. Patent and Trademark Office published a patent application from Apple that reveals the way the fabric of the iPad Pro Keyboard formed its letters, numbers and symbols by using a new laser printing method rather than using a traditional printing methodology like silk screening.

Traditionally, textile printing or marking includes a process for applying color to a textile material or textile component. Traditionally, textile materials may be printed, patterned or marked by subjecting the material to a separate coloring component, such as an ink or dye. For example, traditional dying techniques may include applying a dye or coloring solution to the surface of the textile and/or the individual fibers of the textile. Textiles may also be printed by applying an ink to the surface of the textile using a rolling, screen printing, sputtering or other ink deposition technique.

However, there are some drawbacks associated with some traditional textile marking techniques. In particular, using some traditional dying techniques it may be difficult to create fine features require for small text or lettering. While some ink printing techniques may be used to create fine features, a separate ink material that is deposited or attached to the surface of a textile may be subject to wear and degradation over time. In particular, it may be difficult to maintain an ink-printed pattern on a textile product that is subject to repeated handling or use. Additionally, an application of ink on the surface of the textile may create a raised area or bump, which may be undesirable in some cases.

Apple's invention relates to systems and techniques for laser-marking a fabric material. In particular, embodiments include methods for forming a lightened or substantially white region on the surface of a fabric using a laser. The embodiments described herein may be used to laser mark a wide range of fabrics or fabric based components. In particular, the laser-marking techniques of the present discloser may be used to create text, graphical elements, or other patterns on the surface of a product having at least a portion of a surface formed from a fabric material. Example products include, without limitation, wearable products, straps, lanyards, covers, enclosures, keyboards, user-input devices, and so on. 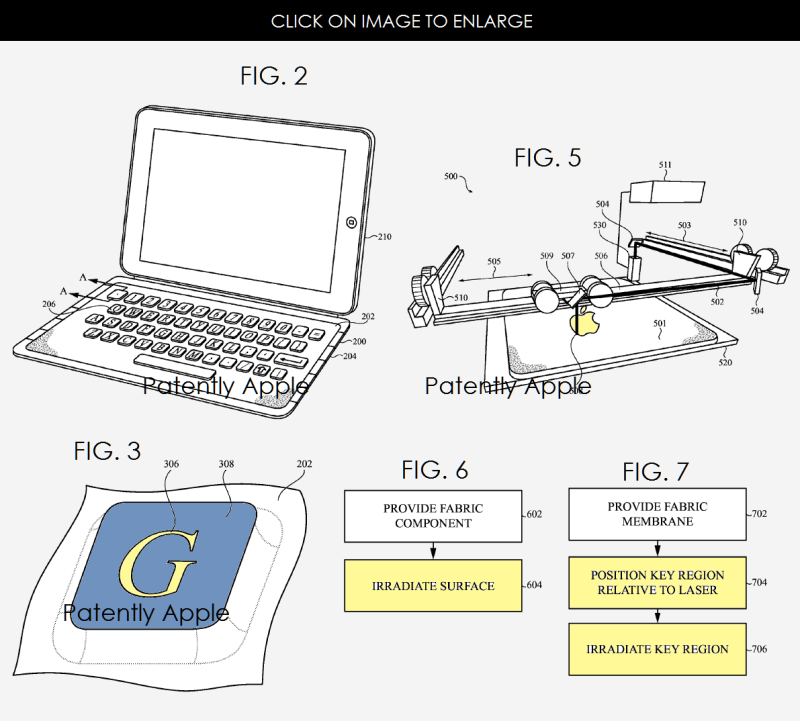 There was some rumbling about the quick wearing down of the laser lettering on the iPad Pro's Smart Keyboard back in April over in a MacRumors forum. Apple may have to refine the laser system to overcome fast fading. Though in the bigger picture, there wasn't much complaining found elsewhere. Whether a few initial keyboards in production failed to be up to standard or it being a wide spread problem has yet to be determined.