Home Archives Contact Us Subscribe Twitter MeWe Facebook Patently Mobile
Is Google Really Planning to Attack the iPhone this Fall with a Google made Smartphone beyond Nexus?
Samsung & Huawei Lower their Smartphone Sales Forecasts for 2016

On June 15 Patently Apple posted a report titled "Samsung's New York Event in August to Introduce the Galaxy Note 7 with Iris Scanning Security." That particular news stemmed from a Korean press report which was somewhat supported by the fact that Samsung had also interestingly filed for "Galaxy Iris" and 'Galaxy Eyeprint' trademarks recently. Samsung has been working on an iris scanner since at least 2014 and we reported in another report in June that Samsung had been working with 'lndustry Academic Cooperation Foundation – Yonsei University' on a next generation iris scanning technology. This week another patent-pending invention from Samsung surfaced at the U.S. Patent and Trademark Office showcasing a new kind of triple camera system to accommodate iris scanning.

Samsung's patent FIG. 1 presented below is a diagram illustrating an example of an image processing system including an iris recognition system. Keep in mind that this isn't a design patent so don't get caught up in the chunky form factor appearance. The patent figure is only of value emphasizing the iris processing system coming to the Galaxy Note or other Galaxy line devices. 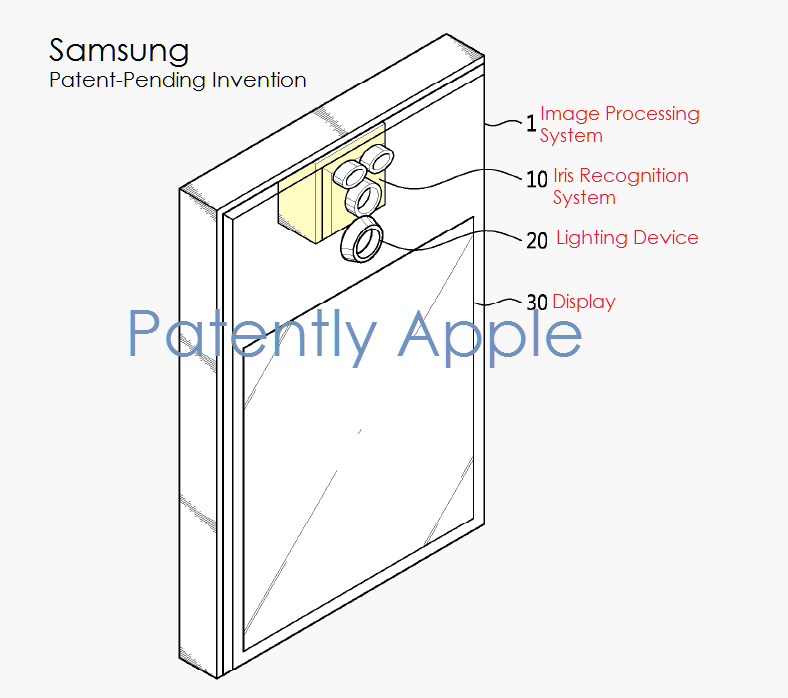 The lighting device #20 of FIG. 1 above may provide infrared rays toward eyes of a user under control of the Application Processor (AP). Also, the AP may control the iris recognition system to operate in a front camera mode or an iris recognition mode. 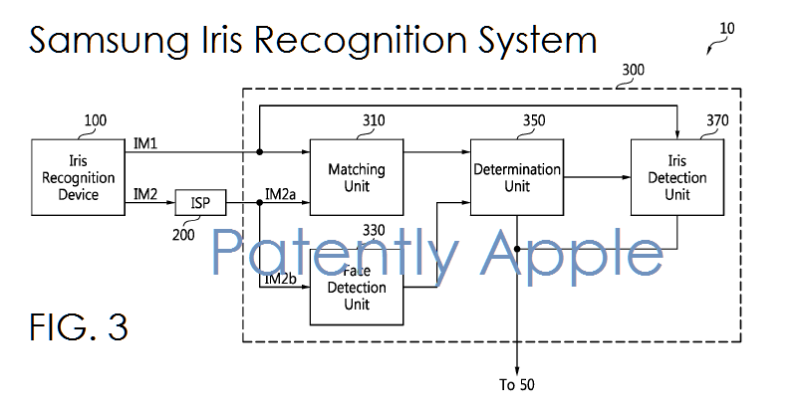 Samsung later notes that "The first lens may include two narrow-angle lenses having narrow angles of view to expand and capture images of regions of the eyes of the user. The second lens may include a wide-angle lens having a wide angle of view to capture an image of the face of the user. The first lens may be a zoom lens, and the second lens may be a short focal length lens. That is, in some embodiments, the iris recognition device may obtain images for recognizing the iris of the user using three lenses.

Samsung further notes that should the iris recognition system not recognize the person trying to access the system a voice message will be issued with guidance on the display to retry the scanner.

Even though the Galaxy Note may be the first device to implement this new iris processing system, they clearly note that their invention could apply to a wide range of products including the following: "a laptop computer, a mobile phone, a smart phone, a tablet personal computer (PC), a personal digital assistant (PDA), an enterprise digital assistant (EDA), a digital still camera, a digital video camera, a portable multimedia player (PMP), a mobile internet device (MID), a wearable computer, an Internet of things (IoT) device, and an Internet of everything (IoE) device."

While Samsung appears to be on target to proceed with an iris recognition system for their next –generation Galaxy Note this August, they've also been working on several new ways to improve on their fingerprint scanner for other devices.

The Galaxy home button being oblong has been a problem not just for Samsung but most Android smartphones. That's why the upcoming Lenovo phone has positioned their fingerprint scanner on the backside of their phone so as to give it more room to do the scanning.

Two Samsung patents have surfaced in the last little while showing two new approaches to improving their fingerprint scanner. 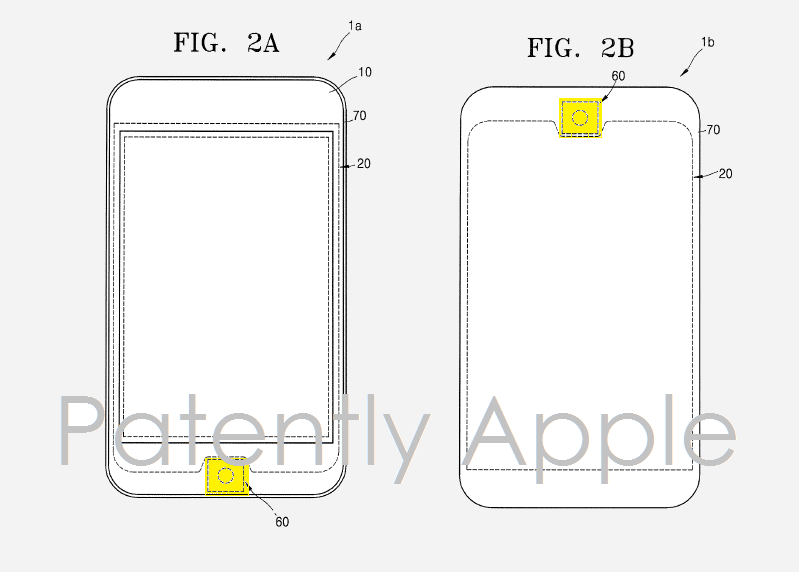 The first appears to adopt an Apple-like Home-styled Button. Samsung patent FIG. 2A is the face of a smartphone and FIG. 2B is the rear of the smartphone. Samsung notes that "the function of module #60 may be a sensor module for detecting or receiving a signal from outside. Examples of the sensor module may include a camera module, a fingerprint sensor, a proximity sensor, and an infrared sensor.

Of course Samsung would be ridiculed to no end for copying Apple if they ever adopted a round or square home button – away from the traditional Android oblong home button – so they also have applied for a patent for a backside fingerprint scanner style as well that provides more space than what they currently offer.

Of course Samsung files a lot of patents and they become optional designs and concepts for them to choose from for future products. Will any of the inventions illustrated today surface this year? While only time will tell – the iris recognition system is the one that the Korean press is sold on coming to market in August – so stay tuned as it's not that far off a wait.