Marty Cooper, who built the first handheld cell phone, says his invention has a glaring flaw: You have to keep charging its battery. "Keeping your phone charger around is a real annoyance," Cooper told CNNMoney in an interview. "And I think it's going to be an increasing problem."

Ensuring that your phone doesn't run out of juice is enough of a pain. But imagine the not-too-distant future when our bodies are covered with different connected devices -- watches, glasses and clothing -- all of which will need to be charged.

"You won't want to take all them off and plug them in," Cooper said. "That's why they ought to be charging all the time."

There are many companies that are attempting to do just that -- keep your wireless gadgets charged all the time. Each has a different kind of solution. Wi-Charge thinks lasers should beam signals from ceiling fixtures to cell phones. U-Beam has bet on powering phones with sound waves.

But Cooper believes that the winning technology will come from Energous, which wants to charge your cell phone using radio frequencies. Cooper sits on Energous' board.

Energous' promise is compelling: By converting radio waves into battery-replenishing power, wireless gadgets equipped with special receivers can literally pull energy right out of the air, enabling them to charge while sitting in your purse, pocket, or wherever they are.

On their website, Energous Corporation states that they have "developed WattUp®, a ground-breaking RF-based charging technology that will fundamentally change the way you think about charging your portable electronic devices. The WattUp wire-free charging system delivers energy over the air in your home, office, car or practically any other space you can imagine via a contained energy pocket. Mobile, wire-free power management means freedom from cords or stationary charging pads, and the potential freedom from worrying about running out of battery life altogether."

David Pogue, Yahoo! Tech stated this about Energous: "I don't say this often, but I think we are looking at the future of technology."

While Apple is behind Samsung for Wireless in-home wireless charging, Apple is known for research and development that delivers unique or superior solutions. Apple was practically last to introduce a true "smartpen" but when they did last fall with their new Apple Pencil, it was an extraordinary smartpen(cil) that offered almost zero lag; Something other OEMs still struggle with. So with a little patience, we're likely to see Apple introduce a wireless charging solution for both in-home and on-the-go.

Yet for now, Wi-Charge, U-Beam and Energous have the lead in this world of wireless charging technology and they're on the cusp of some major breakthroughs to help our iDevices last all day. Until Apple delivers their solutions, you could read more about this in the CNNMoney report here and more on Energous here. 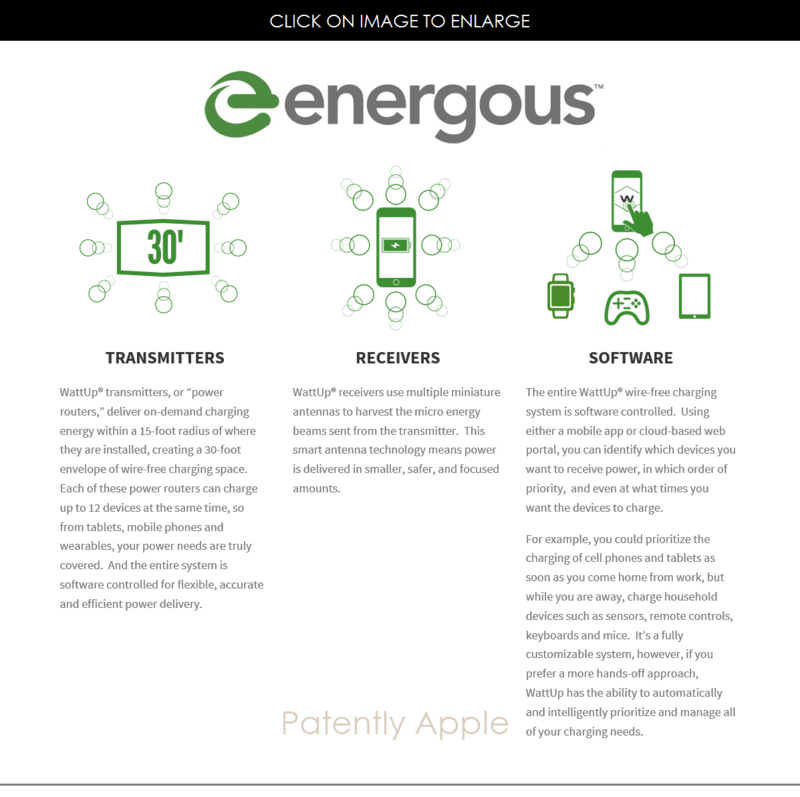