Microsoft's Panay makes it Clear: Surface is to Compete Directly with Apple 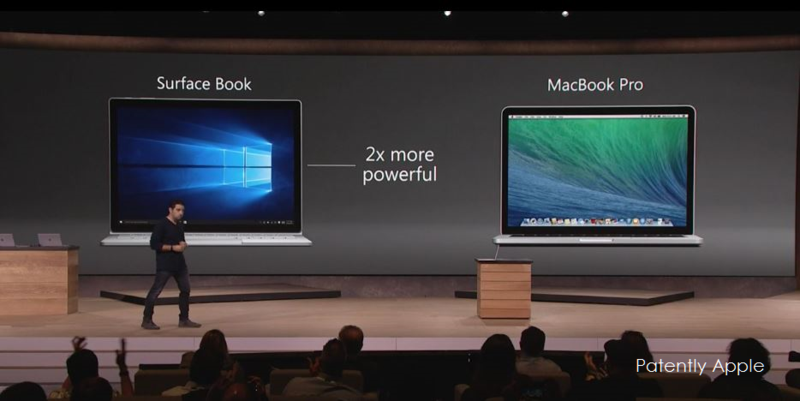 Back in May 2014 Patently Apple posted a report titled "Microsoft's New Surface Pro 3 Thinks it's a Notebook." In that report we pointed out that Panos Panay, Microsoft's Corporate VP for Surface, was obsessed during his Surface Pro 3 introductory keynote about their tablet hybrid being a better notebook than Apple's MacBook Air. The report concluded that "If they ever get serious and challenge the MacBook Air the right way, more would find it appealing. But they're hell bent on making it a tablet that happens to pretend to be a notebook which is backward in my view." In May 2015 Microsoft did just that, actually created a notebook form factor but with a detachable display, something that Apple filed a patent application for back in 2013 and had it approved in November 2015. Apple also filed for a patent regarding a soft keyboard designed for the iPad way back in 2012 which came to life last year with the introduction of the iPad Pro. And yet in Panos Panay's delusional thinking, it's Apple that copied their concept. Panay recently told Mobilesyrup that "We've even seen competitors come in and challenge our concept, which I think is both flattering and challenging," referring to Apple's iPad Pro laptop/tablet hybrid line.

And make no mistake at Microsoft's Panay aiming for Apple with every new hardware product that they make. Our cover graphic shows when Microsoft introduced the Surface Book, they compared it to the MacBook Pro. Panay makes it clearer for us in a new Mobilesyrup report: "Let me be clear. Our intent is to compete in the very premium market… We look at Apple as a key competitor to the Surface product line and that's how we think about the product line. We want to give our customers more options in the premium space." Panay later added that the Surface line's intent is to compete directly with Apple. 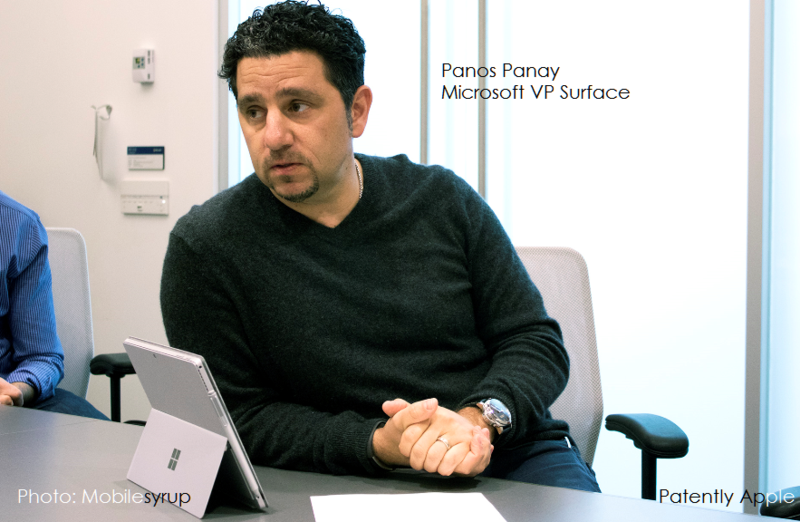 The report further noted that Microsoft had learned significantly from Apple's approach to linking software and hardware on an integral level.

On that point, Panay specifically stated that "We don't want that seam between the hardware and the software. It needs to go away. We don't want that barrier. I think historically you can feel the barrier between the device and its software and that's changing. There's really no such thing as a device and there's really no such thing as software. They're now just products."

While he was on a roll during the interview, Panay decided to take another shot at Apple, according to Mobilesyrup, this time about Apple's adoption of USB Type-C for the new MacBook. Panay noted that "his team chose not to adopt the new port format with the Surface Pro 4 or Surface Book because he feels USB Type-C, at least right now, 'isn't fair.' He feels that despite the technology's strengths, it hasn't reached the point of consumer penetration where it should be included in a laptop." What do you say when your competitor beat you to the punch?

In the end, Microsoft's Panay has proven to be obsessed at taking on Apple in the premium space and this week we learned that Microsoft exited the lower end feature phone business so that they could refocus on premium smartphones.

That probably means that Panay and company are preparing a Surface Smartphone likely for this fall. There's no use asking Panay what competitor they'll be aiming their phone at because he's already made that clear in this recent interview: Apple

It'll be interesting to see what Panay thinks Microsoft can do in the smartphone space that could outshine Apple's iPhone. They'll need a killer app or knockout feature to blow away the market to disrupt Apple's iPhone 7; something I just can't fathom Microsoft possessing at the moment. Can you?