In April we reported on one of the likely first changes coming to Apple's Future MacBooks in the form of an next generation Hinge that uses a new metal injection molding process. A new rumor now tells us about more future features aimed for the MacBook Pro this fall.

In later April we posted a report titled "Will Apple Extend their use of OLED Displays to Future iPads, MacBooks & Beyond?, wherein we noted that Apple supplier Samsung was not only Apple's future iPhone OLED supplier, but possibly an OLED supplier for future MacBooks. While that seemed to be a longer range possibility, according to Apple analyst Ming Chi Kuo of KGI Securities the next generation MacBook Pro's coming this fall may be the first generation of MacBook's to introduce OLED. 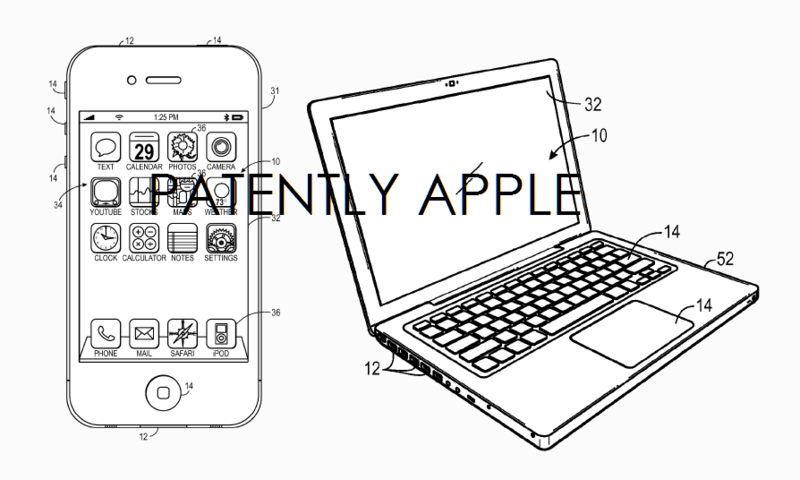 Apple was also granted an OLED patent in March clearly showing OLED was being aimed at the iPhone and MacBooks as noted in the patent figure above. So it's an idea Apple has had in mind for some time.

Last year Apple was also granted a patent for biometric sensing (Touch ID) for a future MacBook. Several sources are now reporting that this is now a feature that Kuo predicts is coming to the next MacBook Pro models.

One of the most interesting and fresh ideas seen in Kuo's crystal ball for this fall is an all-new first-to-market OLED display MacBook Pro touch bar that will replace the physical function keys along the top of the keyboard. That would be a nice touch with the functional keys only being seen when the MacBook is on. In theory, this feature would also have the potential to double as a favorites bar with icons to access apps quickly or act as the OS X dock.