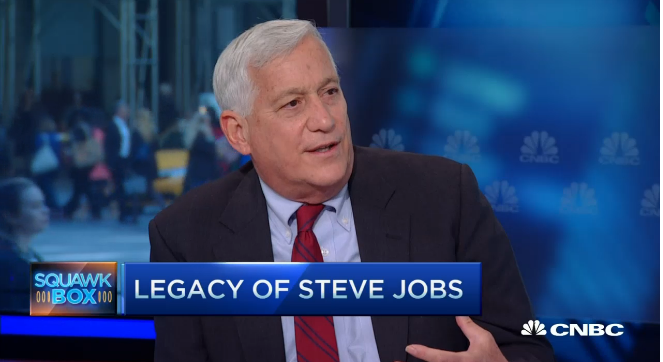 Apple, which has really been to the school of hard knocks recently, is more than ever missing the magic of Steve Jobs, said Walter Isaacson, author of the best-selling biography of the late co-founder of the tech giant.

"What may be missing is the unbelievable visionary like a Steve Jobs, which you just can't say, 'Oh, let's replace Steve Jobs.' It just doesn't happen," Isaacson told CNBC's "Squawk Box" Thursday.

"Nobody can replace Steve Jobs," Isaacson argued. "He was the greatest genius in terms of just knowing intuitively the type of things that would be objects of our desire."

"Tim Cook is a great CEO. And Steve Jobs always thought he was great," Isaacson acknowledged, but added Apple is long overdue to come out with "the next big thing."

"I got the watch, but I don't use it that much. I don't think the watch is the next big thing," Isaacson said, a notion shared by many analysts and experts who follow Apple.

Isaacson recalled that Jobs didn't count any of those products or devices as his great accomplishment. "It was the team that got put in place," including Cook, design guru Jony Ive and marketing chief Philip Schiller.