Google Autonomous Vehicle Patent: Glue a Pedestrian to the Hood of the Car when struck ... Seriously

This week the U.S. Patent & Trademark Office published a granted patent from Google showing off one of their moon-shot ideas. It's an invention designed to literally glue a person to the hood of the car if they're struck by your autonomous vehicle. The vehicle's paint job, on impact, will turn into a super strength adhesive that will literally adhere a pedestrian to the hood so as to help them not experience a secondary impact. There's saying that "There's a fine line between genius and insanity." So I'm not quite sure what side of the line this invention resides. What say you?

Autonomous vehicles use various computing systems to aid in transporting passengers from one location to another. Some autonomous vehicles may require some initial input or continuous input from an operator, such as a pilot, driver, or passenger. Other systems, for example autopilot systems, may be used only when the system has been engaged, which permits the operator to switch from a manual mode (where the operator exercises a high degree of control over the movement of the vehicle) to an autonomous mode (where the vehicle essentially drives itself) to modes that lie somewhere in between.

Motorized vehicles have been used for over 100 years to transport people and products from one location to another location. On occasion, an accident will occur, for a variety of reasons, where a vehicle will collide with another vehicle or object, or even a person. The collision may cause damage to the driven vehicle or the vehicle or object collided with, and may also cause injury to the occupants of the vehicle or the person collided with. As noted above, some vehicles have been equipped with autopilot systems, which permits the vehicle operator to switch from a manual mode to an autonomous mode or to modes that lie somewhere in between that may serve to prevent and/or reduce vehicle collisions.

As a result of the vehicle accidents that occasionally occur, in addition to the autopilot systems, certain protective features have been installed into vehicles. For example, automobiles have been structurally designed to meet certain crashworthiness standards to protect the occupants of a vehicle involved in a collision. In addition, bumpers have been installed on the front and rear of an automobile to prevent injury to the automobile in the event of a low speed collision. Vehicle bumpers are generally designed to absorb energy to prevent injury to the vehicle during a collision, but generally do not provide significant protection for a pedestrian struck by the vehicle.

Some efforts have been made to provide for the mitigation of injury to a pedestrian in a collision with a vehicle. Such systems include a deployable hood featured on certain Jaguar models which raise the hood a certain amount instantaneously upon impact, thus providing a more compliant surface for the pedestrian to impact. A similar technology featured on Volvo models in Europe deploys an airbag on the exterior of the vehicle at the base of the windshield meant to lessen the severity of the impact between the pedestrian's head and any portion of the vehicle. However, existing technology found in production vehicles does little to mitigate the secondary impact a pedestrian may experience after during a collision with a vehicle. 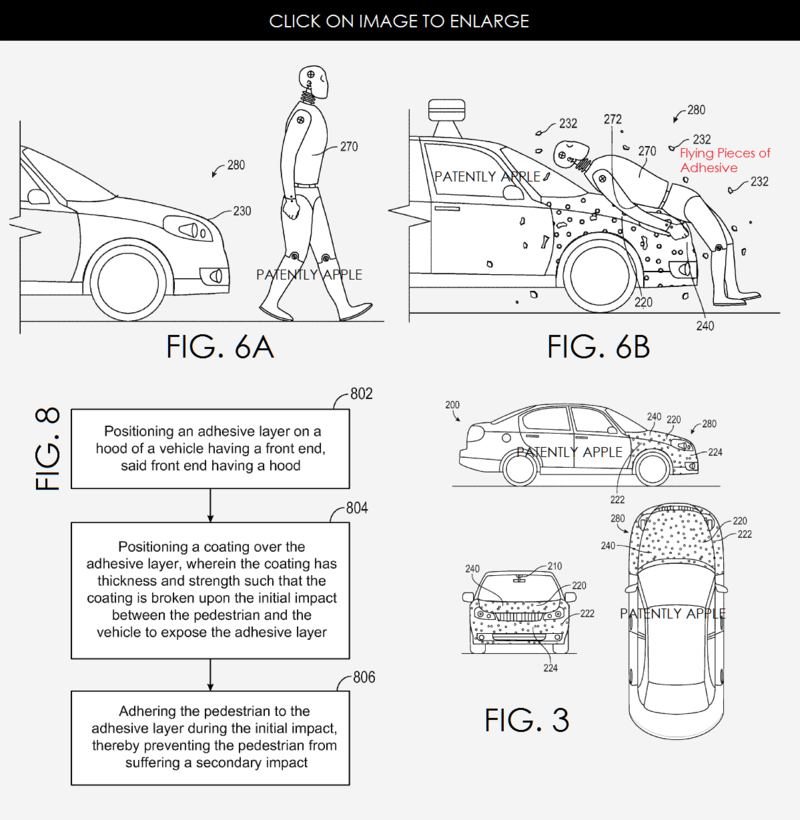 In addition, the front portion of the vehicle may be protected from road debris, dirt, water, and other environmental factors by a thin coating applied over the adhesive layer. This "eggshell-like" material may also carry the aesthetic surface finish of the vehicle's exterior. However, this coating should instantaneously break away in the event of a pedestrian impact, revealing the adhesive layer below, and bonding to the pedestrian. In some embodiments a layer of air may be positioned between the adhesive layer and the thin, frangible coating. It is also desirable to have the adhesive coating release after a short period of time to allow for the removal of the pedestrian from the vehicle.

The use of an adhesive coating on the vehicle may further help to prevent or reduce the possibility of a "tertiary" impact in which a pedestrian who has already been involved in a vehicle collision and been vaulted a certain distance from the vehicle and impacted the roadway, once more collides with a nearby vehicle traveling in the vicinity (or possibly even the same vehicle). By adhering the pedestrian to the front of the vehicle, such a tertiary impact, which could lead to severe injury or even death, may be avoided, thus providing for additional pedestrian safety.

And one more thing: Google's patent claim #6 states the following, just in case  you were wondering: (6) The system of claim 1, wherein the adhesive layer comprises a releasable adhesive so that the colliding object may be decoupled from the adhesive layer after a period of time.

Google filed their now granted patent back in Q4 2014. Considering that this is a patent application, the timing of such a product to market is unknown at this time.