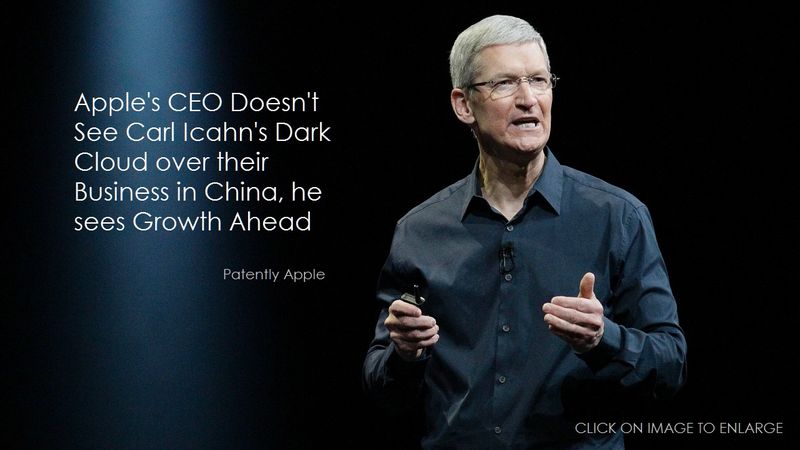 We noted in a report this week that Carl Icahn was singing Apple's praises last year. He told the Financial Times that "Every 50 years, you get a company like this that has everything going for it. I feel so secure with Apple that if it goes down, I just buy more, I don't worry." A year later and the first sign of trouble for Apple in China and Icahn ran for the exit; So much for his little song and dance. Yet what's troubling is that he characterized the problem in China in a way that represented a total disconnect to how Apple currently views their business in China.

To make matters worse, Ian Bremmer came on CNBC the following day to throw gasoline on the fire – on the issue of China's crackdown on Apple. Ian Bremmer is the president and founder of Eurasia Group, a political risk research and consulting firm with offices in New York, Washington, London, Tokyo, São Paulo, and San Francisco. Bremmer is an American political scientist specializing in U.S. foreign policy, states in transition, and global political risk.

Ian Bremmer told CNBC in a report titled "Why Apple's China Problem is likely to get much, much worse," that China was very likely to limit Apple's access to the country's consumer base.

Goldman Sachs analyst Simona Jankowski wrote in a report Wednesday following the company's disappointing second-quarter earnings release. "It bears watching whether the recent ban of Apple's iTunes and iBooks stores in China has broader implications for how friendly the environment remains for Apple to grow its business in the country." This from an analyst who was pounding the table for Apple just weeks ago and singing its praises. She knew of China's crackdown on Apple at the time she was praising Apple on one side of her mouth. Why was it a factor only after Apple reported their financials? It really does appear that Goldman Sachs was suckering their clients into buying Apple shares prior to the report while they were actively shorting the stock.

So how can anyone take Goldman Sachs analyst Simona Jankowski or Carl Icahn comments on the China crackdown seriously when they apparently had other motivating factors at play? What Icahn stated was rather a huge leap in light of the facts emanating from Apple's Financial Conference Call.

Yesterday we posted a report on Tim Cook's opening statement and below you'll read about Tim Cook's view of trends in China that derived from the Q&A session at Tuesday's financial conference.

In the segment below you'll read about Apple opening another 5 Apple Stores in China this quarter.

China's crackdown on iTunes at the moment is limited in its scope and it appears to be a cultural conflict on the types of content being available. That's something I'm sure Apple will be able to work out with government authorities. Some may call that censorship, but some of the content that's acceptable in North America today is clearly not acceptable in China and rightfully so.

But a conflict on cultural grounds didn't stop China approving Apple Pay from being launched in their country nor did they deny Apple building permits to build another five stores and employ hundreds of local workers. So this crazy leap that China's crackdown on a cultural basis is going to somehow be a dark cloud over Apple's business in general going forward isn't believable with what we know to be the facts today.

Q&A with Apple's CEO On China

A: If you take Greater China, we include Taiwan, Hong Kong and Mainland China. The vast majority of the weakness in the Greater China regions sits in Hong Kong.

Our perspective on that is that it's a combination of the Hong Kong dollar being pegged to the U.S. dollar and therefore it carries the burden of the strength of the U.S. dollar and that has driven tourism, International shopping and trading down significantly compared to what it was in the year ago.

And so as I backup from this and look at the larger picture, I think that China is not weak as has been talked about. I see China as … we may not have the wind at our back as we once did – but it's a lot more stable than what I think is the common view of it.

And so we remain optimistic on China. We opened seven stores there during the quarter. We're now at 35 [Apple Stores]; we'll open five more stores this quarter to achieve 40. And the LTE adoption continues to rise there – but it's got a long way ahead of it.

So we continue to be really optimistic about it. And so we would just ask folks to sort of look underneath the numbers at the details in them, before concluding anything."

At the end of the day, the comments about Apple's problems in China appear to be greatly exaggerated at the moment. Cook even asked the analysts to look at the details beneath the numbers before concluding anything. But of course it's just easier to cast doom on Apple because that's the easier headline to create.

Cook noted in his opening statement that we covered yesterday that none of the sales for the iPhone SE model had made it into the reported quarter. Which country was leading with pre-orders for the new iPhone? Yes, China – with over 3.4 million orders.

Cook was never asked about the crackdown on iTunes in China and that's unfortunate because this issue could have been clarified leaving Icahn to dream up some other reason for dumping Apple's stock. So unless Apple is hiding something materially important that will come back to bite them in the future, Cook has made it very clear that he remained optimistic about China and that growth would return to that market.