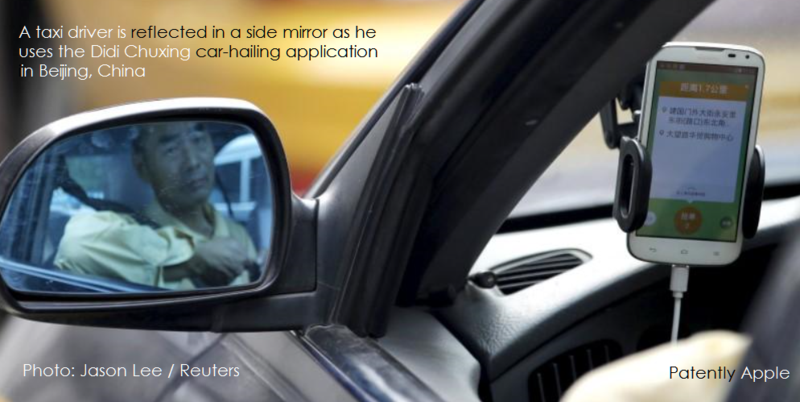 Investors are eagerly watching to see whether Apple will enter the automotive business, especially after the news about Apple secretly working on a partnership with Magna. Apple continues to hire a wide range of automotive experts, and the company is exploring building a self-driving car. Late last night Reuters broke the news that Apple had invested $1 billion in Chinese ride-hailing service called Didi Chuxing. The move aligns Apple with Uber Technologies Inc's chief rival in China, as automakers and technology companies forge new alliances and make cross investments.

Reuters reports that "Apple reaps much higher margins on the iPhone than most auto makers enjoy, but the investment suggests that the tech giant is contemplating transportation services that could prove more lucrative, said Bob O'Donnell, an analyst with TECHnalysis Research. "This investment shows they are thinking not just about cars but business models around transportation, and that is a very encouraging and interesting sign," he said.

In February Bloomberg reported that "Google is preparing to offer its own ride-hailing service, most likely in conjunction with its long-in-development driverless car project. Drummond,  Google's chief legal officer, had informed Uber's board of this possibility, according to a person close to the Uber board, and Uber executives have seen screenshots of what appears to be a Google ride-sharing app that is currently being used by Google employees. The first rumors of this surfaced last December.

So Apple's latest investment is showing us a similar line of thinking between autonomous vehicles and an Uber style service.

The Reuters report further notes that "Didi Chuxing, formerly known as Didi Kuaidi, said in a statement that the funding from Apple was the single largest investment it has ever received. The company, which previously raised several billion dollars, dominates the ride-sharing market in China. The company said it completes more than 11 million rides a day, with more than 87 percent of the market for private car-hailing in China."

It would appear that Apple's longer strategic move here is to get the leap on Uber and Google in China and possibly provide them with a mass market to test market vechicle technologies.

In the shorter term, Cook told Reuters that they remained focused on the in-car experience with its CarPlay system, which links smartphones to vehicle infotainment systems. "That is what we do today in the car business, so we will have to see what the future holds," he said. For more on this, read the full Reuters report here.

Forbes adds that "Didi’s president Jean Liu said the Apple deal happened quickly, following a meeting in Apple’s Cupertino headquarters with CEO Tim Cook on April 20th. Liu couldn’t offer specific areas in which the companies would cooperate but said on a conference call that the companies would benefit each other "on product, technology, marketing, and many other levels."

On the more practical side of Apple's news, the Forbes report further noted that "For Apple, the immediate upside of its $1 billion Didi investment could be payments. Chi Tsang, an HSBC analyst in Hong Kong stated that the deal could "give their users another reason to use Apple wallet," adding that Apple Pay could be used to pay for Didi." The analyst also thought that there could be a co-branding aspect to this. For instance, an advertisement could say "We’re launching Apple Wallet in Beijing and you can use it to order Didi and get a five kuai (yuan) discount."

When you think of the 11 million rides a day covering 400 cities that Didi Chuxing generates, that's certainly a way to put Apple Pay on the map very quickly in China.