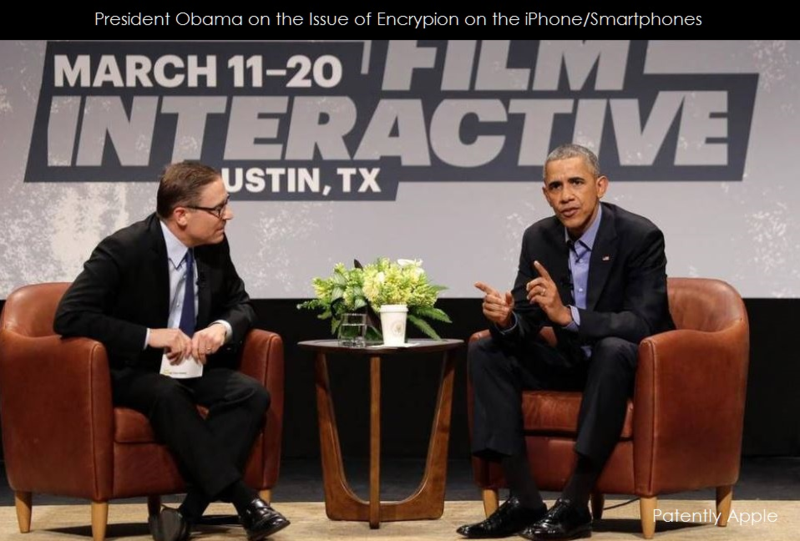 Earlier this month Patently Apple posted a report titled "President Obama Sheds Light on the Government's take on Smartphone Encryption and Apple's 'Black Box' Position." While President Obama clearly acknowledged that strong encryption is important to safeguard against the disruption of financial systems or air traffic control, he wondered if it made sense to create a security system with no door at all and let child pornographers and other criminals operate in the dark where law enforcement couldn't track that element of our society. His conclusion last month was that technology companies shouldn't take an absolutist view of encryption and create impenetrable black boxes. Yet when push comes to shove, a new report published today claims that "The White House is declining to offer public support for long-awaited legislation that would give federal judges clearer authority to order technology companies like Apple to help law enforcement crack encrypted data, according to sources familiar with the discussions." Yes, it's a political year and taking sides that would anger democrats would be a mistake.

The Reuters report further noted that "The Obama administration's refusal to either endorse or oppose legislation from Senators Richard Burr and Dianne Feinstein, the Republican chair and top Democrat respectively of the Senate Intelligence Committee, stems in part from ongoing divisions among various federal agencies over encryption, the sources said.

Those divisions persist despite statements from President Barack Obama last month indicating that he supported efforts by the Department of Justice to ensure encrypted devices could be legally unlocked. He did not comment about the case brought to compel Apple to break into an iPhone used by one of the shooters in the December massacre in San Bernardino, California.

The DOJ dropped its legal action against Apple last week, saying it had found a way to hack into the phone. The case has prompted new calls for a legislative solution to the encryption debate.

Burr is expected to introduce his legislation as soon as this week after vowing to do so for several months. Though the White House has reviewed the text and offered feedback, it is expected to provide minimal public input, if any, the sources said. For more on this story, see the full Reuters report here.

One last detail to this story comes from The Verge who writes that "The FBI isn't keeping its new iPhone attack secret from everyone. The FBI has already briefed Senator Diane Feinstein (D-CA) on the methods used to break into the iPhone at the center of Apple's recent legal fight. Senator Richard Burr (R-NC) is also scheduled to be briefed on the topic in the days to come. Feinstein and Burr are both working on a new bill to limit the use of encryption in consumer technology, expected to be made public in the weeks to come."