Home Archives Contact Us Subscribe Twitter MeWe Facebook Patently Mobile
Did Enron's Ex-CFO Compare his Company's Complex Accounting Schemes to those of Apple's in Ireland?
Drake's New Album 'Views from the 6' will be an Apple Music Exclusive on April 29

Although Google has been filing patents for the design of an advanced high-altitude balloon network for some time now (examples one and two) and CEO Larry Page talking up Project Loon with Charlie Rose at a TED Conference, it appears that they're simultaneously dreaming of another Moon Shot project related to a communications satellite constellation wrapped around the globe.

In 2014 Google signed a 60 year lease with NASA airfield and hangers. The Verge reported at that time that "Google may use Hangar One, as well as two sequentially named hangars on the airfield, as a space for research, development, assembly, and testing of technology related to robotics, aviation, space exploration, and other new fields once it moves in. Perhaps Google's recent patent application discovered at the US Patent Office for a new satellite constellation is one of the many projects that they have on their drawing board.

Google's patent FIG. 1B noted below shows us a schematic view of exemplary orbital paths or trajectories of the satellites in their proposed system. 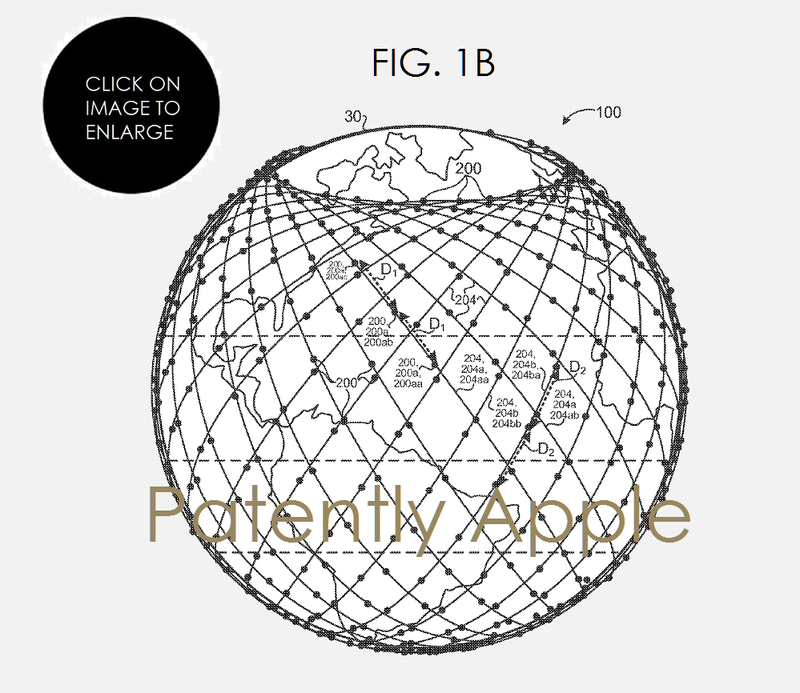 Google further notes that "It is also desirable to provide reduced latency of the system and enhanced security due to the use of the satellites as compared to fiber or cable-based communications. Moreover, it is desirable to have a cost effective system.

In Google's patent FIG. 3A noted above we're able to see a schematic view of an exemplary path between satellites of different groups where each group is at a different altitude; patent FIG. 4 is a perspective view of a satellite used in the exemplary global-scale communication system of satellites.

Google Fiber may be part one of this larger communications system that Google has in mind with their satellite constellation.

Google's satellite system is to work hand in hand with their fiber optics ground system stations.

One of the interesting little twists noted in Google's patent application is their view on providing security for their consumers. Today, the hot button issue is all things related to providing end-to-end encryption on mobile devices led by Apple's fight with the FBI.

Yet before the war began, we posted a report in May 2015 titled "Apple & 140 Tech Companies Sign Letter Urging Obama to Support Encryption," where Google was one of the major players on board.

In Google's September 2014 patent application we see them highlight consumer protection in respect to stopping wire taps or certain types of hacks.

Google's patent filing notes that "Communication security can be a major concern when building a communication network that allows different users to communicate over long distances and especially continents.

A communication signal being transmitted via a cable may be intercepted and the information being communicated may be retrieved. In some examples, fiber optics cables can be tapped for interception of communications using special tapping equipment.

Interception of an optical fiber allows for the retrieval of all voice and data communications transmitted through the fiber cable, which in most instances may not be detected. The fiber may also be deliberately or accidentally cut or damaged, interrupting communications.

Therefore, to avoid or minimize data interception or interruption, the global-scale communication system limits or in some cases eliminates the use of fiber cables, providing a more secure signal trafficking.