Electrocardiography is a technique that records electrical activity of the heart by measuring electrical signals through the skin. The measurements result in a waveform (electrocardiogram) that shows the beating of the heart. The waveform may also include other features that may be indicative of heart health, abnormalities, or medical conditions. The electrocardiographic measurements can be obtained by placing electrodes on the skin at multiple body locations (e.g., on the chest, arms, and/or legs) and electrically connecting the electrodes to a heart monitor. Typically, electrocardiograms are obtained in clinical settings in which a physician, nurse, or other medical professional is involved in placing the electrodes on the body and operating the heart monitor.

To measure an ECG signal, the device may include two electrodes that can be placed in contact with the person's skin at respective locations such as the person's torso, chest, abdomen, pelvis, back, wrist(s), forearm(s), upper arm(s), leg(s), thigh(s), etc. For example, first and second electrodes could contact skin at separate locations on the torso of the person (e.g., at two locations on the chest of the person, on either side of the person's heart), and the ECG signal may be extracted from voltage fluctuations between the first and second electrodes. One or more properties of a detected ECG signal and/or of a plurality of detected ECG signals (detected, e.g., during a plurality of respective periods of time) could be determined and/or related to one or more physiological and/or health states of the person.

Google's patent FIG. 1A illustrates such an example device that includes a reference electrode #110 disposed on a housing #130. 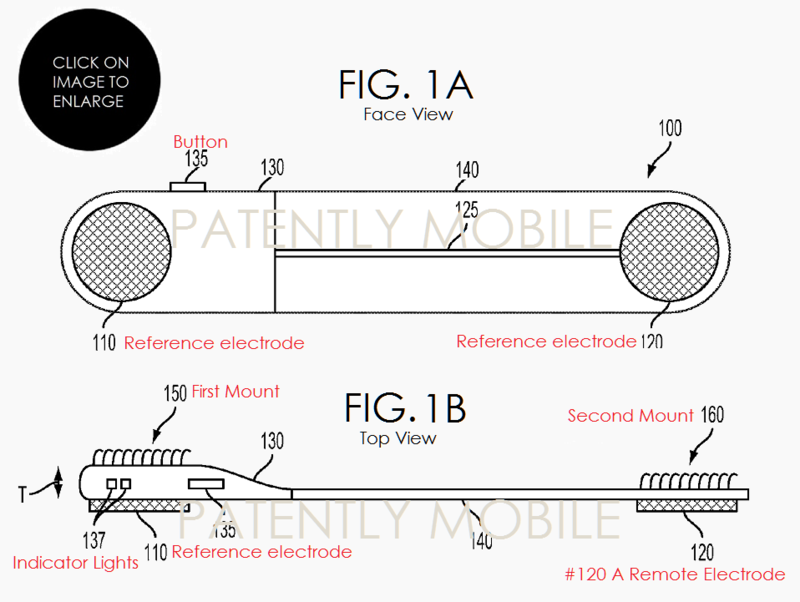 Google's patent FIG. 1B illustrates a top view of the device that further includes a user interface including indicator lights #137 and a button #135 configured for indicating information (e.g., alerts generated based on an extracted ECG signal, alerts received from a system in communication with the device. 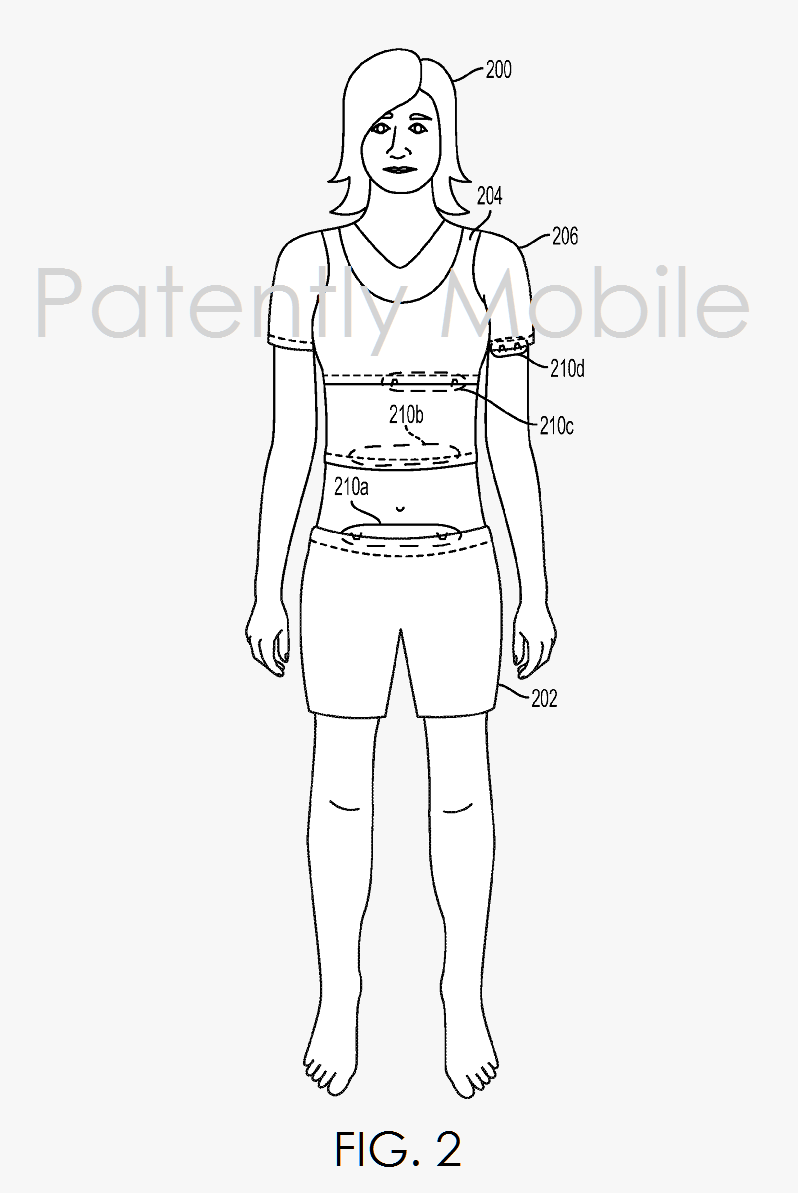 The garments include shorts (202), a brassiere (204), and a shirt (206) worn over the brassiere. A first device #210a is mounted to a band of the shorts such that electrodes of the first device are in contact with skin at pelvic locations on the torso of the wearer.

In some examples, the housing comprises a flexible polymer, fabric, or other material configured to protect elements (e.g., electronics) of the device while allowing the device to wholly or partially deform and conform to surfaces of the body of the wearer.

The invention covers devices by which a user may obtain electrocardiographic measurements of themselves outside of clinical settings.

When the device is worn accordingly, the wearer may obtain electrocardiographic measurements while involved in certain activities (e.g., while running or engaged in other forms of exercise) or throughout the day. Thus, the device may facilitate continuous or near-continuous cardiac monitoring. Such cardiac monitoring could allow the detection of rare events (e.g., arrhythmias, transient bradycardia and/or tachycardia), cardiac electrical activity during a wider range of wearer behaviors than occur in a hospital or other controlled medical setting, the detection of changes in the electrical activity of the heart over protracted (e.g., weeks, months) periods of time, or other properties of the physiological state of a wearer.

Google later notes that the microprocessor may obtain data related to the electrocardiographic signal (e.g., after the signal is digitized by the analog-to-digital converter), and the microprocessor may use the wireless transmitter to transmit the data related to the electrocardiographic signal to a remote computing device (e.g., to the "cloud").

Google's patent application that was published by USPTO last week was originally filed back in October 2014. Considering that this is a patent application, the timing of such a product to market is unknown at this time.