Home Archives Contact Us Subscribe Twitter MeWe Facebook Patently Mobile
Laugh or Cry: The Woz Tells the BBC that Apple Should Pay a 50% Tax Rate
Apple Could be the First Foreign Company to get a Regulatory Waiver to Open Retail Stores in India

As Promised, China begins Crackdown on Apple over Content under the Guise of Security 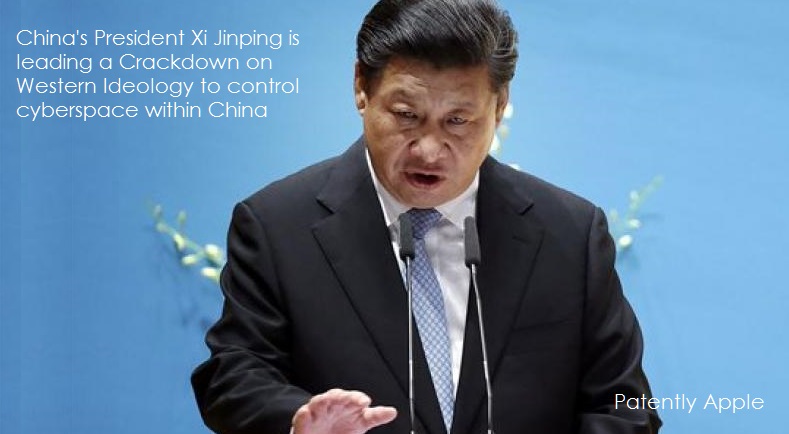 Days after we learned that China demanded to have Apple's iOS Source Code but was denied, we learn that China's regulatory body known as the State Administration of Press, Publication, Radio, Film and Television abruptly shut down Apple's iBooks Store and iTunes Movies. And yet in January 2015 we posted a report titled "Apple is the First U.S. Company Agreeing to have their Products Submitted to Chinese Authorities for Web Security Evaluations." So what went wrong?

The New York Times reports that "New resistance from the Chinese government to that expansion could potentially hurt the Cupertino, Calif., company." Back in November 2015 we reported that China was determined to build its own secure smartphones to ensure no foreign country back doors, even though Apple assured China's ministry to the contrary back in 2014.

The New York Times quotes Daniel H. Rosen, founding partner of Rhodium Group, a New-York based advisory firm specializing in the Chinese economy as saying that "China has sweeping goals in its move against Apple. They are interested in protecting the content that the Chinese people see, policing its national security and favoring indigenous giants such as Huawei, Alibaba and Tencent." In this new era, he added, China "is strongly disinclined to accept the dominance of foreign players on the Internet, not least those from the United States."

After the shutdown of Apple's services, President Xi Jinping of China, who has led a crackdown on Western ideology, conducted a meeting on Tuesday in Beijing on China's restrictive Internet policies. China's top tech leaders, including Jack Ma, chairman of the e-commerce company Alibaba, and Ren Zhengfei, head of Huawei, were present at the meeting.

"China must improve management of cyberspace and work to ensure high-quality content with positive voices creating a healthy, positive culture that is a force for good," a report by the state-run news service Xinhua quoted Mr. Xi as saying.

There have been some signs of trouble ahead. Mr. Xi has presided over a deep freeze on the Internet, increasing censorship and taking aim at online tools used to circumvent China's system of online filters, known as the Great Firewall. He has also added new policy tools to keep tabs on electronic communications. Mr. Xi heads a committee of top leaders set up to streamline tech and Internet policy and turn the country into a "cyberpower."

In addition, the Chinese government proposed an antiterrorism law two years ago that would require foreign companies to turn over encryption keys — the codes that enable otherwise-scrambled information to be viewed — for security reasons. Though the language was ultimately dropped, analysts said the government wants to have access to all communications within China. For more on this story, see the full New York Times report here.

In the end it could be as simple as Apple working with China's Ministry to scrutinize some of the content on their online services a little more carefully or it could be the beginning of darker intensions ahead.

Last September we noted the Chinese "government distributed a document to some American tech companies earlier this summer, in which it asked the companies to promise they would not harm China's national security and would store Chinese user data within the country, according to three people with knowledge of the letter who spoke on the condition of anonymity.

The letter also asks the American companies to ensure their products are "secure and controllable," a catchphrase that industry groups said could be used to force companies to build so-called back doors — which allow third-party access to systems — provide encryption keys or even hand over source code.

Signing the new pledge could set a precedent of American tech firms openly cooperating with Beijing and enabling snooping on users. Conversely, a refusal could bring fresh restrictions or penalties for companies in China's enormous market."

As noted at the top of our report, Apple's Sewell made it known that they denied China Apple's source code, and lo and behold, China is now bringing fresh restrictions and penalties against Apple in the form of stopping certain iTunes content. Is that a coincidence or simply China acting on exactly what they said they would do if tech companies like Apple didn't cooperate with them over handing over their source code? And more importantly, over time, will Apple blink so as to save their growth opportunities in China?