The U.S. Patent and Trademark Office officially published a series of 62 newly granted patents for Apple Inc. today. In this particular report we cover Apple's invention that allows a touchpad or touch surface to simulate textures and temperatures such as cool metal or hot cement. In 2012 Apple introduced a wildly intelligent multi-tiered haptics system for OLED displays and today's granted invention builds on that foundation. There was buzz about Apple introducing an iPad that would offer a Senseg-like surface back in 2012 that never panned out. Whether simulated touch is still a consideration for future touch devices is unknown at this time.

Such control may include utilizing the actuator to move vertically and/or horizontally to vibrate at least a portion of the touch surface. Such vibrations may simulate the tactile sensation of texture. Rougher surfaces may be simulated by producing stronger vibrations than those produces to simulate smoother surfaces.

In some cases, the vibrations may be varied over time, such as in response to one or more touches detected using one or more touch sensors (such as position sensors, force sensors, capacitive sensors, and/or other sensors capable of detecting one or more characteristics of a touch). For example, the vibrations may be varied over time in response to detection of a touch moving across the touch surface in order to simulate the grain of a wood surface.

In some implementations, the touch surface may include a layer of diamond material. The diamond material may be a layer of chemical vapor deposited diamond, such as a layer of carbon vapor deposited diamond. Such a layer of diamond may provide extremely high thermal conductivity (which may exceed that of copper by approximately a factor of five), extreme mechanical hardness (providing exceptional wear resistance), and/or optical broadband optical transparency (being transparent from approximately ultraviolet to far infrared). 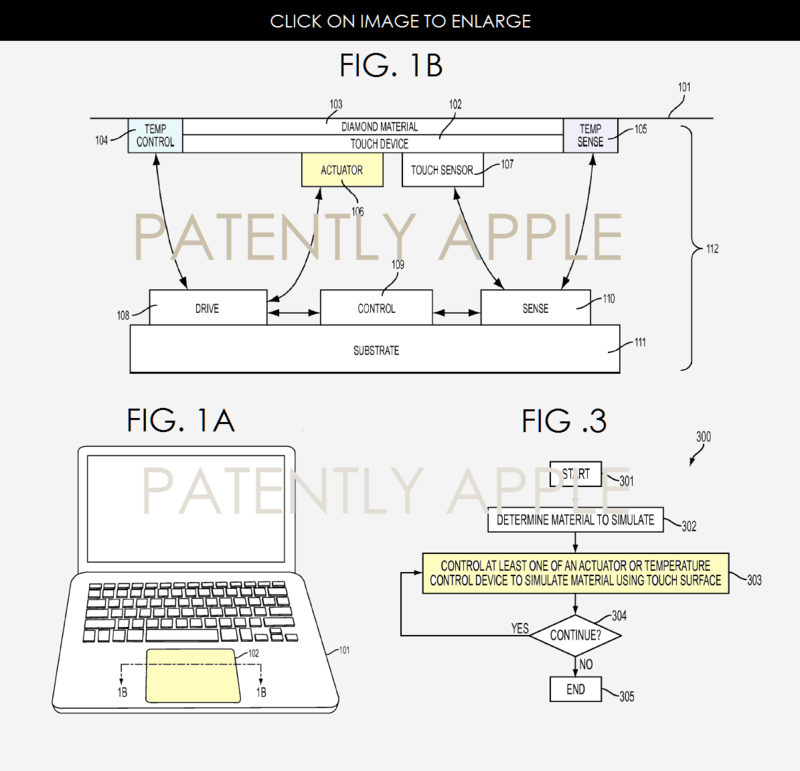 For more details you could check out our original coverage of this invention a year ago here. Apple's granted patent was originally filed in Q4 2013 and published today by the US Patent and Trademark Office.