According to a new IDC report, the first quarter seasonality combined with an overall disinterested customer base led to an annual decline of 14.7% in worldwide tablet shipments during the first quarter of 2016 (1Q16). Worldwide shipments of tablets including slate and detachable form factors reached 39.6 million. Slate shipments for the quarter stood at 87.6% while detachables reached 12.4%, a new record. Apple's dominance in the overall tablet market was unsurprising.

The latest iPad Pro 9.7" and more enterprise friendly storage options for the slightly older iPad Pro 12.9" are healthy additions to the iPad lineup. The recent price drop on the iPad Air 2 should help sway those who were previously undecided to upgrade their older iPad 2s. 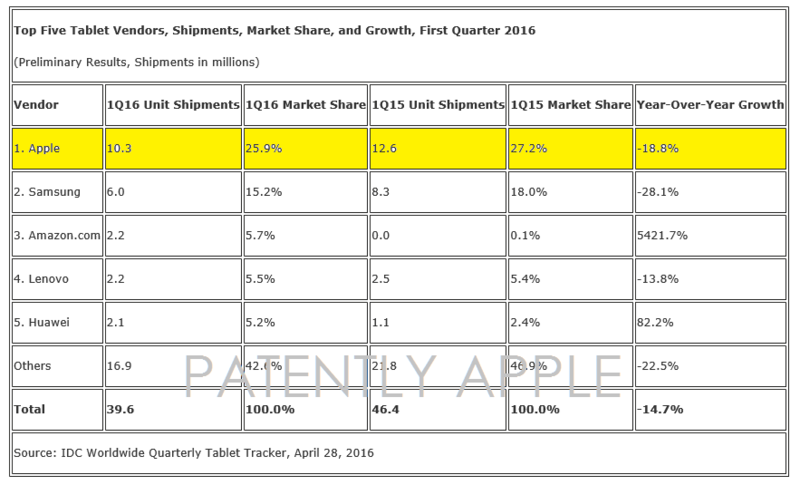 IDC expressed their opinion that the future of the iPad market will be largely relegated to replacements of older iPads or PCs rather than net new additions. Yet let it be known that as of January 2015 Apple had sold 250 million iPads. Apple sold another 59 million since then for a total of about 309 million. While we can't say how many of these are new to the iPad's base vs. replacements, it's suffice to say that Apple's iPad base is massive and a problem only other OEMs would die to have.

IDC's report further noted that the 'detachables' market experienced triple-digit year-over-year growth on shipments of more than 4.9 million units, an all-time high in the first quarter of a calendar year. Jean Philippe Bouchard, Research Director, Tablets at IDC stated that "The introduction of detachables from traditional smartphone vendors is only beginning and pose a real threat to traditional PC manufacturers. Their understanding of the mobile ecosystem and the volume achieved on their smartphone product lines will allow them to aggressively compete for this new computing segment.

Apple's iPad sales fell 18.8% year-over-year with shipments of 10.3 million; Samsung's tablet sales dropped 28.1% with shipments of 6 million; and the funniest stat of all was Amazon growing their tablet business 5,421.7% yet only had sales of 2.2 million. That was because they dropped their table to $50. Even at that price they could only sell 2 million – what a joke.

Yet the one fact that stands out that's amazing is that with Microsoft having been selling tablets/detachables for years now, they continue to miss the top five vendor list with number five being Huawei selling 2.2 million units. With all of Microsoft's bravado that their Surface Pro 3 was better than a MacBook Air, and that their Surface Book detachable was 2X more powerful than the MacBook Pro, they couldn't get sales to put their oh-so-great tablets/detachables on IDC's top five vendor chart. Now how pathetic is that? And with the iPad Pro only coming to market last year, it was the top selling detachable in Q4 2015. Now how about that for a slap in Microsoft's face?

If Microsoft's Surface sales can't crack IDC's top five vendor's list for tablet/detachables next year, Microsoft's CEO Satya Nadella should pull the plug on their table business or change their marketing away from trying to compare their units to Apple products. Let's make it clear: They had enough time to try to make their marketing message work and it failed miserably. At some point, the joke is just as stale as Microsoft is.