Home Archives Contact Us Subscribe Twitter Facebook MeWe Parler Patently Mobile
Apple's CEO Kicked off his Keynote Questioning How much Power the U.S. Government should have over our Data
An Industry Giant, Intel's Andy Grove Dies at 79 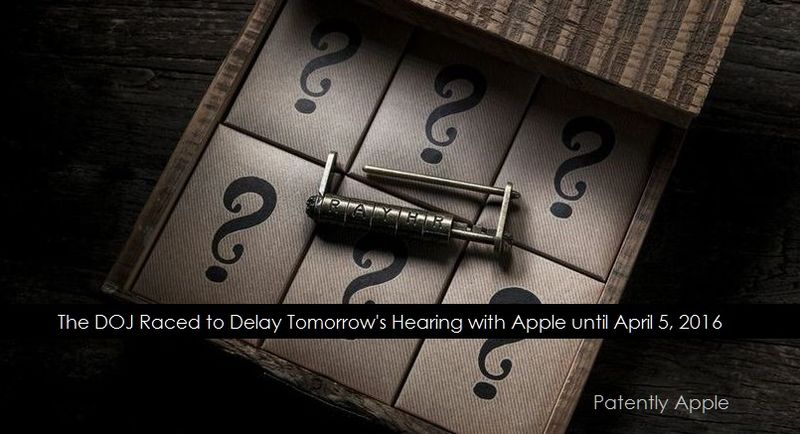 Just as the war between the FBI and Apple was set to resume tomorrow, a bizarre last minute development by the FBI was made public. Citing a new possible way to access a locked iPhone used by a shooter in the San Bernardino terrorist attack, the Justice Department earlier today convinced a federal court to cancel a Tuesday hearing on whether Apple should be forced to help the FBI break into the device.

A DOJ spokeswoman said in a statement that "As a result of these efforts, an outside party demonstrated to the FBI this past weekend a possible method for unlocking the phone. We must first test this method to ensure that it doesn't destroy the data on the phone, but we remain cautiously optimistic. That is why we asked the court to give us some time to explore this option."

For the moment, the DOJ's move hits the pause button on a case that has pitted Washington against Silicon Valley in a fierce debate over the role tech companies should play in terrorism investigations. The Justice Department now has until April 5 to test its prospective technical fix, which law enforcement sources, speaking with reporters on Monday, repeatedly declined to detail. For more on this development, read Politico's full report here

In part, Cook noted today during Apple's special event that "We did not expect to be in this position at odds with our own government. But we believe strongly that we have a responsibility to help you protect your data and protect your privacy. We owe it to our customers and we owe it to our country. This is an issue that impacts all of us and we will not shrink from this responsibility."

Has the FBI legitimately found a workaround method to open the locked iPhone 5c or is there some form of politics being playing out here? Is the FBI trying to delay until legislation in California passes? Considering that the FBI is refusing to provide details for the requested delay, anything is possible – so stay tuned.