Home Archives Contact Us Subscribe Twitter MeWe Patently Mobile
In Responding to Apple's Motion, the Government Reminds the Court that Apple's Back Door' theory is a Diversionary Tactic
Intel's Insanely Fast Optane SSDs will be Compatible with Macs when it Debuts in Late 2017 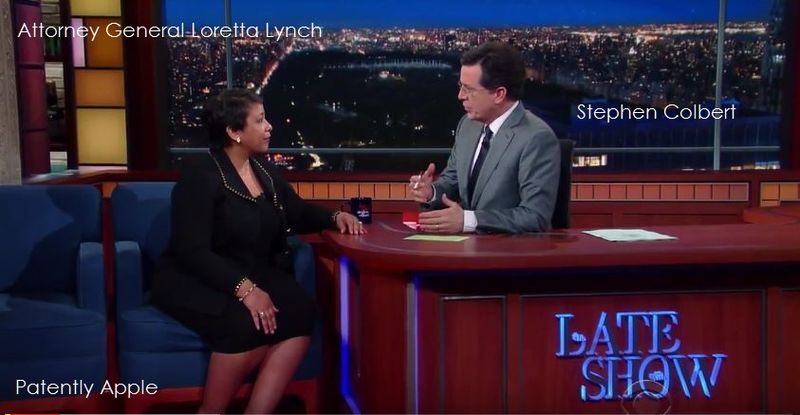 Late yesterday the U.S. Government filed a motion responding to Apple's motion to vacate the order compelling them to assist the FBI unlock an iPhone 5c used by terrorist Syed Farook. One of the main points made in the filing was that Apple's iOS back door theory was a diversionary tactic and not one based on facts of the case. Apple's Senior Legal VP Bruce Sewell replied saying that the government's brief was out to vilify Apple, though a day earlier Apple's Senior VP of internet software and services was out in full force talking about possible intimating searches of iPhones belonging to immigrants to put fear into that community and in turn vilify the government.

Last night, Attorney General Loretta Lynch was a guest on the Late Show with Stephen Colbert to talk about the Apple case and repeat that there's never been a request for creating a back door to Apple's iOS.

The segment with Loretta Lynch discussing the iPhone case starts at the 3:00 minute mark where she makes it clear that all that the government is asking for in this case is for Apple to disable the iPhone 5c's 'password erase function' that basically wipes the phone if you guess the password wrong after ten times; that's it. Once that feature is removed, the FBI will attempt to get into the phone and extract the evidence, end of story.

Although Loretta Lynch is America's top crime fighter, she denied last night of secretly being Batman, contrary to recent rumors.