Today, the U.S. Patent and Trademark Office published a patent application from Apple that reveals that advanced gestures for Apple Watch based on motion may work their way to market over time. Some of the advanced gestures will eventually cover sign language, according to Apple. Today as the user raises their arm to see what time it is or to check out an app, the Apple Watch goes from sleep mode to being fully awake. Today's invention goes way beyond that basic motion command to things like open your car door or answer a call.

Many existing portable electronic devices use voice or touch input as a method for the user to communicate commands to the devices or to control the devices. One example is a voice command system, which can map specific verbal commands to operations, for example, to initiate dialing of a telephone number by speaking the person's name. Another example is a touch input system, where the user can choose a specific device setting, such as adjusting the volume of the speakers, by touching a series of virtual buttons or performing a touch gesture. While voice and touch input can be an effective way to control a device, there may be situations where the user's ability to speak the verbal command or perform the touch gesture may be limited.

Apple's invention relates to a device like Apple Watch that detects a user's motion and gesture input through the movement of one or more of the user's hand, arm, wrist, and fingers, for example, to provide commands to the device or to other devices.

The device can be attached to, resting on, or touching the user's wrist, ankle or other body part. One or more optical sensors, inertial sensors, mechanical contact sensors, and myoelectric sensors, to name just a few examples, can detect movements of the user's body. Based on the detected movements, a user gesture can be determined. 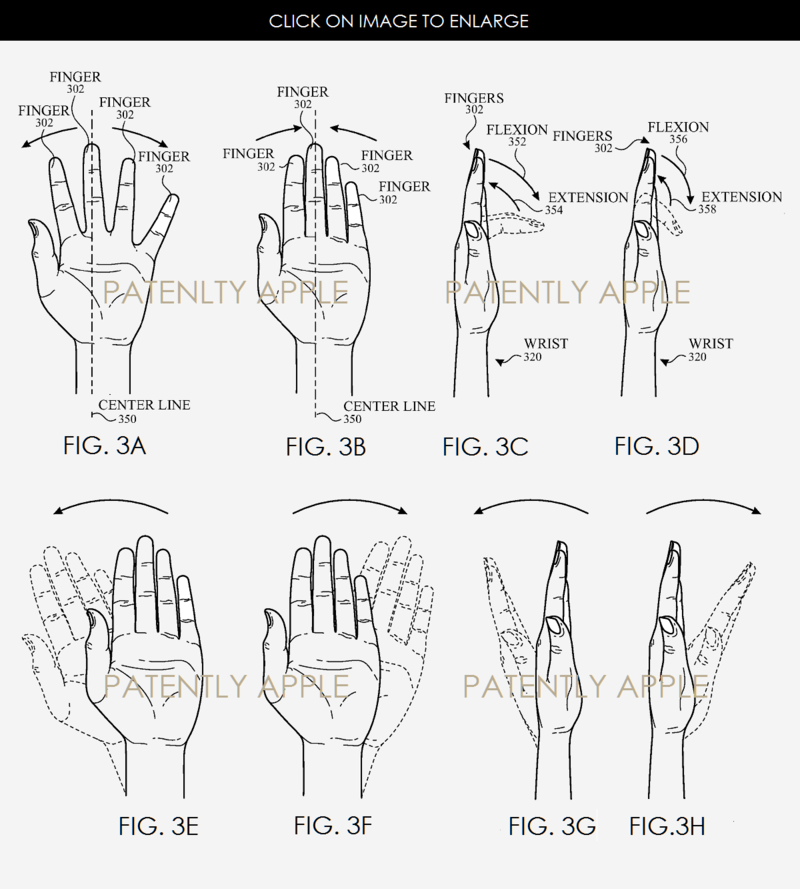 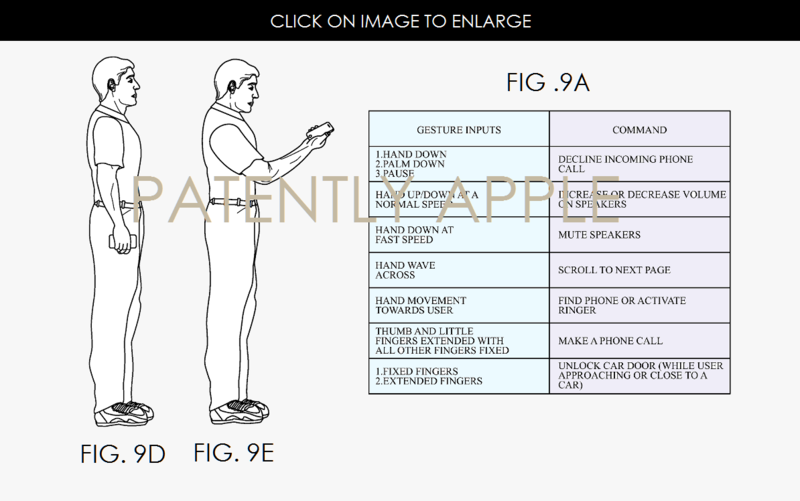 Apple's patent FIG. 9B noted below illustrates an exemplary process flow for determining a command based on the user's movement; FIGS. 9F-9H illustrate exemplary finger movements associated with sign language. 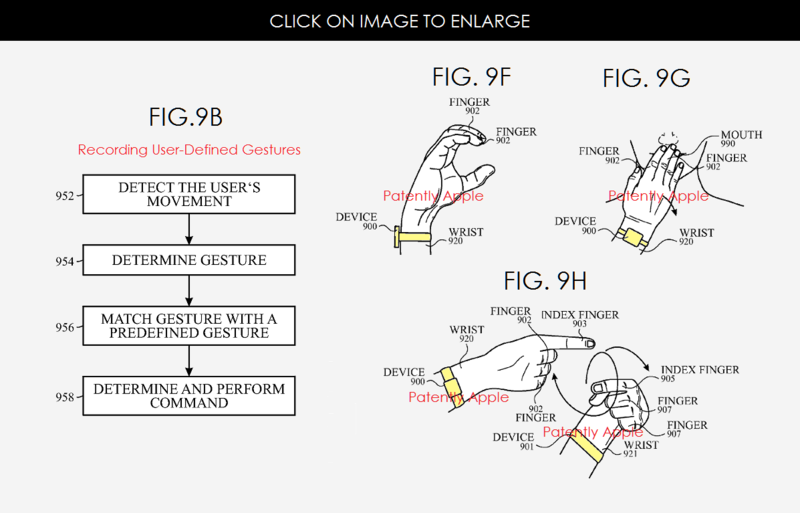 Apple's patent FIG. 4 below illustrates an exemplary configuration of a wearable device attached to the wrist of a user. A user's arm includes fingers, a hand and wrist. Apple Watch (Device #400) can be attached to, resting on, or touching a user's skin at any body part, such as the user's wrist. Muscles #430 can be attached to the bones in fingers #402 through tendons #410. 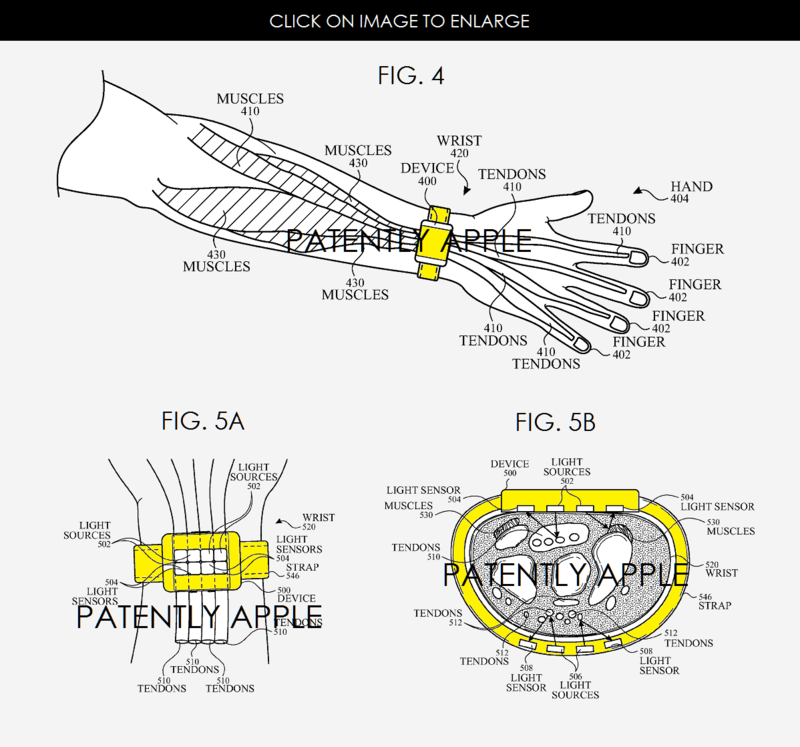 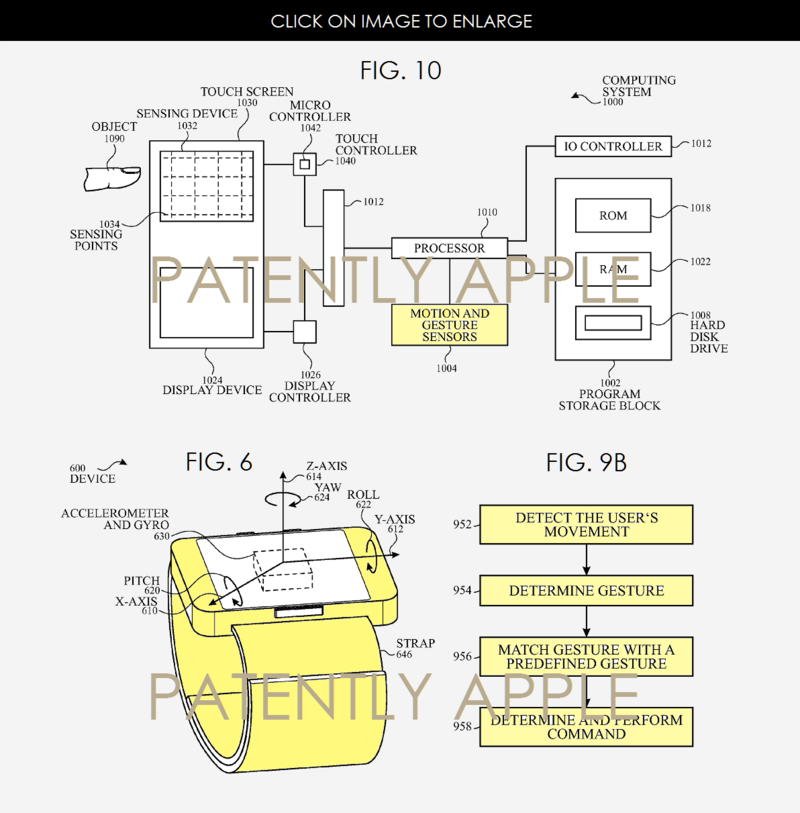