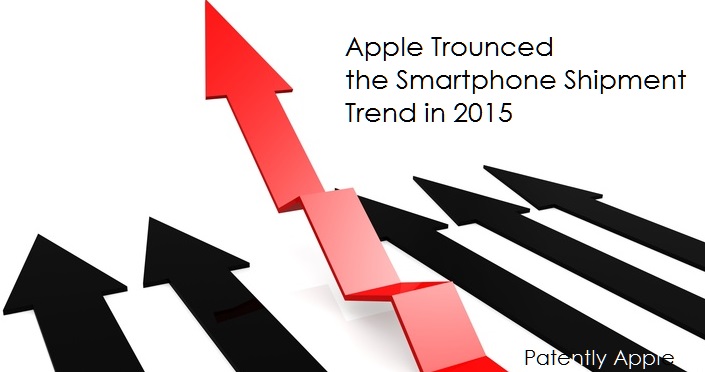 IDC's latest smartphone report notes that 2015 was a tremendous year for Apple and the iPhone as shipments hit a new record of 231.5 million for growth of 20.2% over 2014, which was nearly double that of the overall smartphone market. More importantly, Apple was able to grow its ASP from $663 in 2014 to $713 in 2015. The continued upgrades to the newer, pricier iPhones were the primary catalyst for increasing ASPs at a time when the majority of the market is chasing low-cost models. IDC expects 2016 to be relatively flat regarding iPhone volume as noted in their chart below. However, growth should return in 2017 and beyond as its trade-in programs will expand into markets outside of North America and help drive churn.

Ryan Reith, Program Director with IDC's Worldwide Quarterly Mobile Phone Tracker further noted that he believes that "Apple's move into the trade-in business with its 'Trade Up with Installments' program is aimed at further increasing churn in some of its most lucrative markets despite the high penetration rates. By entering this space, Apple can more tightly control the trade-in offerings, as well as monitor the demand for where these perfectly functioning 1-year old iPhones end up. The latter is just as important as the trade-in location as it will give Apple a strong pulse on areas of high demand but perhaps less disposable income."

For the record, today's IDC report issued in North America doesn't mention Xiaomi or India in any specific way. However, an Indian tech site called Gadgets 360 quotes a recent IDC report today that is focused on the Indian market. Here we surprisingly learn that Apple has overtaken Xiaomi in this market.

Specifically, the report noted that "New data released by International Data Corporation (IDC) for Q4 2015 finds that Apple overtook Xiaomi in the Indian smartphone market in terms of units shipped."

The report further notes that "One of the biggest surprises emerged with the latest data was when Apple overtook Xiaomi with a market share of 4.6 percent while the latter captured 3.5 percent share."

IDC reportedly added that Apple dominated in the 'over $300 (roughly Rs. 20,000) smartphone' segment with a 42.1 percent market share.

As per the market research firm, a major factor helping Apple edge past Xiaomi was the recent price correction for the iPhone 5s, iPhone 6, and iPhone 6 Plus in India."

With Apple hoping to build a series of Apple Stores in India later this year, the news of Apple overtaking Xiaomi is a great start on their path to taking on Samsung in a more meaningful going forward in India.