Last week Patently Apple posted a granted patent report that surprisingly revealed that a liquid metal part was or will be used in all iOS device home buttons. Today, the U.S. Patent and Trademark Office published a patent application from Apple that revealed yet another liquid metal invention that Jony Ive's industrial team could take advantage of for rapid prototyping of new devices or components using a new 3D printing investment mold.

A large portion of the metallic alloys in use today are processed by solidification casting, or investment casting, at least initially. The metallic alloy is melted and cast into a metal or ceramic mold, where it solidifies. The mold is stripped away, and the cast metallic piece is ready for use or further processing. The as-cast structure of most materials produced during solidification and cooling depends upon the cooling rate. There is no general rule for the nature of the variation, but for the most part the structure changes only gradually with changes in cooling rate. On the other hand, for the bulk-solidifying amorphous alloys the change between the amorphous state produced by relatively rapid cooling and the crystalline state produced by relatively slower cooling is one of kind rather than degree--the two states have distinct properties.

Until the early nineties, the processability of amorphous alloys was quite limited, and amorphous alloys were readily available only in powder form or in very thin foils or strips with a critical thickness of less than 100 micrometers. A class of amorphous alloys based mostly on Zr and Ti alloy systems was developed in the nineties, and since then more amorphous alloy systems based on different elements have been developed. These families of alloys have much lower critical cooling rates of less than 10.sup.3.degree. C./sec, and thus they have much larger critical casting thicknesses than their previous counterparts. However, little has been shown regarding how to utilize and/or shape these alloy systems into structural components, such as those in consumer electronic devices.

In particular, pre-existing forming or processing methods often result in high product cost when it comes to high aspect ratio products (e.g., thin sheets) or three-dimensional hollow products. Moreover, the pre-existing methods can often suffer the drawbacks of producing products that lose many of the desirable mechanical properties as observed in an amorphous alloy.

Apple's invention provides a method including forming a 3D investment mold using a layer-by-layer construction for receipt of a molten alloy having a composition configured to form a bulk metallic glass (BMG, liquid metal) on cooling. The mold is configured to be filled with a molten amorphous alloy to form a housing of an electronic device.

Amorphous alloys can be used for making sports equipment, medical devices, electronic components and equipment, and thin films. In respect to electronic components and electronic devices, Apple's filing elaborates by listing the specifics as follows: a telephone, such as a cell phone, and a land-line phone, or any communication device, such as a smartphone, including, for example an iPhone, and an electronic email sending/receiving device. It can be a part of a display, such as a digital display, a TV monitor, an electronic-book reader, a portable web-browser (e.g., iPad.TM.), and a computer monitor. It can also be an entertainment device, including a portable DVD player, conventional DVD player, Blu-Ray disk player, video game console, music player, such as a portable music player (e.g., iPod.TM.), etc.

It can also be a part of a device that provides control, such as controlling the streaming of images, videos, sounds (e.g., Apple TV.TM.), or it can be a remote control for an electronic device. It can be a part of a computer or its accessories, such as the hard drive tower housing or casing, laptop housing, laptop keyboard, laptop track pad, desktop keyboard, mouse, and speaker. The article can also be applied to a device such as a watch or a clock.

Apple's method is also good for rapid prototyping. A part can be prototyped quickly since permanent mold tooling is avoided. Only the lead-time and cost to produce a single part would be required. Furthermore, many iterations of part design could be accomplished rapidly, since permanent mold tooling would not have to be modified with each iteration. This would be a great advantage for Jony Ive and his industrial design team in developing next generation devices and components.

Traditionally, molds have been formed using a lost wax method (e.g., when forming a ceramic mold) or in a process that involves coating a (metal) mold with ceramic powder. However, the material costs might dwarf the mold costs. Further, if machining of the mold were required after its casting (e.g., machining off portions on the exterior of a steel mold), the costs are expensive for most and can be wasteful.

3D printing, also known as "additive manufacturing" (AM) or layer by layer processing, may be used to produce or form 3D investment molds directly from computer-generated design data (the mold as described herein is the three dimensional product formed from digital data). Such molds may be used in investment casting processes or methods. The process described herein uses 3D printing to produce a metal mold, thus sharing some of the benefits of the above-noted lost wax method while being suitable for molding amorphous metals. Generally, 3D printing uses layering techniques to build three-dimensional parts.

Such 3D parts may be formed by forming successive thin cross-sections of the desired part. The individual cross-sections are formed by bonding together adjacent grains of a granular material on a generally planar surface of a bed of the granular material. Each layer is bonded to a previously formed layer to form the desired three-dimensional article at the same time as the grains of each layer are bonded together. 3D printing can be quicker and less expensive than machining of prototype parts or production of cast or molded parts by conventional "hard" or "soft" tooling techniques, which can typically take from a few weeks to several months to manufacture, depending on the complexity of the part. 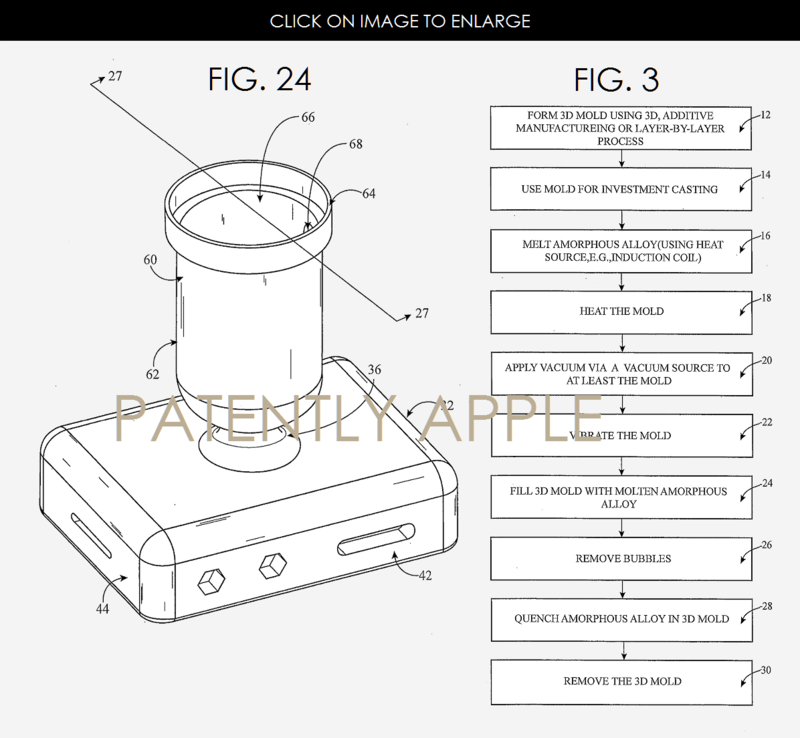 Apple's patent FIG. 3 is a flow chart illustrating exemplary steps in a method of forming a mold using a 3D or layer by layer printing process and a method of using the mold; FIG. 24 shows a first perspective view of the exemplary investment mold of FIGS. 4-13 with a funnel attached to its seat for a crucible tube.